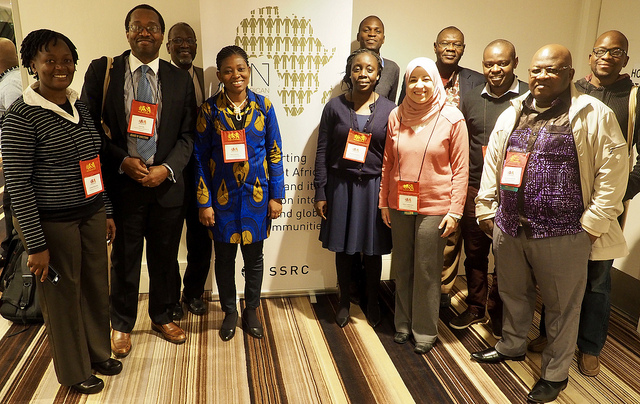 APN alumnus Patience Adzande (IRG 2017) presented on "Harnessing the Social Energies of Youths in Farming and Pastoral Communities in Managing Conflicts in Nigeria.” Dr. Adzande placed the ongoing farmer-herder conflicts in Nigeria in the context of the long history of conflict between farmers and herders over natural resources across Sub-Saharan Africa. Despite the many negative connotations of large youth populations in the scholarly and policy literature (e.g. youth crisis, youth bulge, demographic bomb) there is a growing recognition of the role youth can play in conflict transformation and peacebuilding. Her APN-supported research in three Nigerian states: Plateau, Adamawa, and Benue found that youth are engaged in informal policing, mediation, negotiation, and restorative justice approaches.

The second presentation, by APN alumnus Musa Adam Abdul-Jalil (IRG 2015), was titled "Coping with Uncertainties and Conflicts: The Predicament of Nomadic Pastoralists in Southern White Nile State, Sudan." His paper examined the adaptation strategies employed by pastoralists in White Nile State (Sudan) in response to recent challenges. Prof. Abdul-Jalil's APN-supported research examines the impact of agricultural development projects which have put a lot of former grazing land under cultivation, e.g. Gezira irrigation scheme, sugar plantations. Moreover, the secession of South Sudan in 2011 has led to a redefining of the identity and status of pastoralists of northern origins living in South Sudan. Returnees to Sudan have different coping strategies depending on each household's situation, including changing from cattle to sheep breeding and subsistence agriculture. Some families are separated across borders while poorer pastoralists have become more sedentary, moving into the margins of urban areas.

APN alumnus Dr. Mary Setrana, who co-chaired the special panel with Program Director Dr. Cyril Obi, gave a paper titled “Farmer-Herder Conflict and the Challenge of 'Peacebuilding from Below' in Ghana.” The paper, based on APN-supported research, explored the potential and challenges of local peacebuilding, using the case of farmer-herder conflicts in Ghana to critique liberal peacebuilding approaches, which often fail to take into account the role of local norms, contexts, and values. Dr. Setrana argued that focusing on local approaches to peacebuilding in the conflict between Fulani herders and sedentary farmers allows for more agency of local actors, resilient institutions, and takes advantage of the greater legitimacy of local authorities. Among the major challenges to local and sustainable peacebuilding identified were (1) lack of trust and willingness to compromise, (2) land ownership and access—related to the need to address questions of citizenship, (3) interference by elites and the state.

Several APN grantees and alumni spoke on other panels throughout the course of the conference. APN grantee Samaila Suleiman (IRG 2018) presented on “Policing Local Histories: The Nigerian History Machine and the Production of Middle Belt Historiography” on a panel about "Contesting Historical and Cultural Imaginaries.” Dr. Suleiman, a 2018 ASA Presidential Fellow, described how the production of Nigerian history was a nationalist project that used state-sponsored institutions, such as museums, archives, schools, and universities, to “federate” the existing competing narratives to produce a single grand narrative. Despite this, he continued, “the state has never been in control of the process.” The civil war and later authoritarianism made these institutions sites of contestation over Nigerian history. Thus, the Nigerian nation was “born without a corresponding historical and cultural narrative, and its experience shows that producing national history can be problematic in a pluralistic society.”

APN alumnus Godfrey Maringira (IRG 2014; CWG 2016-18; BMC 2018) gave a talk titled “Leaving Gun Life: Former Youth Gangsters in South Africa” on a panel about “Promoting Constructive Engagement and Active Youth Participation to Build Resilient and Inclusive Societies,” convened by the International Development Research Centre (IDRC). Dr. Maringira explained that armed youth "gangs" are a legacy of the South African liberation struggle, which was fought in black townships. In post-apartheid South Africa, "gangsters" who had once protected townships began to torment their communities. Dr. Maringira shared findings from his APN-supported research on the experience of transitioning out of gang life for young men in black townships in Cape Town, including the pressure to conform to violent notions of masculinity.

Another 2018 ASA Presidential Fellow—former APN grantee Rawia Tawfik (IRG 2017)—presented on the "Frontiers of Sovereignty" panel. Her paper, titled "Shared Rivers…Distant Visions: Elite Perceptions and Regional Integration in the Eastern Nile,” challenged the assumption that cooperation on shared water resources in the Eastern Nile (between Ethiopia, Egypt, Sudan) is a necessary condition for cooperation in other areas, i.e. "beyond the river." She attributed the increased regional tension in recent years to upstream countries wanting to change the dominant legal order governing Nile water use, for example, the Cooperative Framework Agreement (CFA) in 2010. Ethiopia’s unilateral construction of the Grand Ethiopian Renaissance Dam (GERD) has also strained relations. Despite the expressed desire to move toward cooperation, exemplified by the 2015 Declaration of Principles, Dr. Tawfik stressed the need to carefully examine the conditions of cooperation and not to assume that these benefits of cooperation are objectively defined.

Two APN alumni, Duncan Omanga (IRG 2014) and Richard Alemdjrodo (IRG 2016; CWG 2018-2020), both Carnegie Corporation Scholars—received full support from Carnegie Corporation of New York (CCNY) to present their research at the ASA meeting. Dr. Omanga presented on the first CCNY panel on “Publishing in, for, and about Africa: The Global Politics of African Knowledge Production” where he spoke on digital media and the contested production of peacebuilding knowledge in Kenya. He recounted a negative experience collaborating with a team of Western academics to exemplify how Africa is understood as an object of research and source of primary data—which leads to reductionist narratives. Dr. Alemdjrodo (IRG 2016) presented on the second CCNY panel on “Africa in the World: Envisioning Afro-futures in a time of globalization.” His paper, titled “Nationalism, Regionalism or Multilateralism: Africa at the crossroads,” highlighted the unequal performance of African regional organizations and the role of the continent in the emerging global institutions, such as BRICS and various Chinese-led initiatives, challenging the dominance of the Western-led global financial and political order.

APN alumnus Pamela Khanakwa (IRG 2015) participated in a roundtable on "Evidence, Narration, and Innovation in the work of Luise White." Dr. Khanakwa noted that White, a distinguished historian working on the social and cultural history of colonial East and Central Africa, uses unusual forms of evidence—including rumor and gossip as sources—which marks a radically different approach to historical and anthropological writing that has caused readers to rethink truth, historical evidence, and which voices matter as sources.

In addition to grantees and alumni, APN Advisory Board Chair Prof. Ismail Rashid participated in the roundtable: "Negritude, Identity, Democracy, and the African Renaissance: Honoring Abiola Irele and Raufu Mustapha." Prof. Rashid noted that Irele's 1965 article, "Negritude or Black Cultural Nationalism," is always on his syllabus to provide students with insights into the lively dialogue across the African diaspora in the 1920s and '30s, and the historical trajectory of Pan-Africanism.

During the closing ceremony, Duncan Omanga and Richard Alemdjrodo were honored as Carnegie Scholars while Rawia Tawfik and Samaila Suleiman were honored as 2018 ASA Presidential Fellows.

View photos from the event on our Flickr page