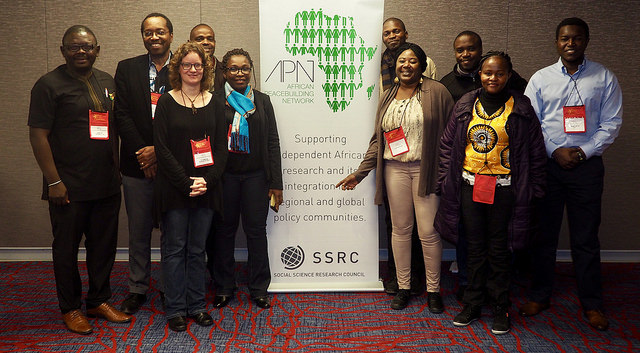 The African Peacebuilding Network (APN) of the Social Science Research Council (SSRC) participated in the 60th African Studies Association (ASA) Annual Meeting in Chicago, Illinois, from Thursday, November 17, to Saturday, November 19, 2017. The theme for this year’s meeting was “Institutions: Creativity and Resilience in Africa.” In all, eleven APN grantees made presentations on various panels. Three APN staff members and two APN advisory board members also participated in the meeting.

The program convened two panels where its grantees and alumni shared insights from the findings of their APN-supported research projects. The first was on November 18, and the second on November 19. The first, a “Roundtable on Early-Career Scholars and Challenges of Research-Focused Careers in Africa,” was chaired by Peace Medie (Individual Research Grant 2015; Book Manuscript Completion Grant 2016), a research fellow at the Legon Center for International Affairs and Diplomacy (LECIAD), University of Ghana. The other participants were: Amanda Coffie (IRG 2016), also a research fellow at LECIAD; Godfrey Maringira (IRG 2014 & Collaborative Working Group member 2016-2018), a post-doctoral fellow at the University of the Western Cape, South Africa; and Olajumoke Yacob-Haliso, a lecturer at Babcock University, Nigeria. Peace centered her presentation on the ways in which various institutional frameworks and conditions within African universities affect the prospects of early-career scholars. Amanda discussed the shortage of research funding from both public and private sources, and heavy teaching loads, as being impediments to research-focused careers. Olajumoke spoke to the lack of access to up-to-date academic literature and well-resourced libraries, as well as the difficulty of finding time for extended field research due to inflexible university bureaucracies and family responsibilities (the latter constraint being particularly acute for female academics). In his contribution, Godfrey examined the absence of mentorship from senior scholars and the limited opportunities for collaboration with peers within the academy. The participants also shared experiences and coping strategies that have enabled them to overcome some of the structural and institutional problems they face.

The second panel on "The Challenge of Building Resilience in Post-Conflict African States: What Role for Local Institutions?,” was chaired by APN Program Director Cyril Obi. The first presenter, Jimam Lar (IRG 2016), a lecturer at the University of Jos, Nigeria, presented a paper on "Transboundary Mobility and Post-Conflict Security on the Nigeria-Nigerien Border: Exploring the Role of Local Non-State Peacebuilding Institutions,” which explored three characteristics of the various vigilante groups occupying the peripheral borderland region of northern Nigeria: quasi-rural policing force; violent criminals who sometimes engage in vigilante excesses; and facilitators of cross-border smuggling networks. Abosede Babatunde (IRG 2016), a lecturer at the Centre for Peace and Strategic Studies, University of Ilorin, Nigeria, gave a presentation on "Environmental Conflict, Traditional Institutions and the Quest for Durable Peace in the Niger Delta,” which focused on the positive role that traditional cultural values and institutions can play in fostering ethical and accountable leadership, and peace, in the restive oil-rich Niger Delta region of Nigeria. On her part, Jacinta Mwende Maweu (IRG 2015), a lecturer at the University of Nairobi, Kenya, delivered a paper on "The Role of Media in Building Trust and Resilience in Post-Election Conflicts in Kenya.” Her presentation noted that Kenya’s reoccurring post-election conflicts were not simply attributable to ethnicity, but rather linked to historical injustices and flawed electoral processes. The final speaker Bomino Georges Bosakaibo of Nagoya University, Japan, gave a paper "Political Institutions and Resilience in the Democratic Republic of the Congo (DRC) Post-Conflict.” He argued that the failure of political decentralization as envisioned in the 2006 peace agreement, was a key reason behind the lack of resilience of local government institutions in the DRC. The panel discussant Godfrey Maringira, identified common themes running through the presentations and called the presenters’ attention to the need to unpack the concept of local institutions by examining the ways in which they are fractured and fragmented. He advised that integrating this approach into their research would strengthen their analyses of resilience in post-conflict contexts.

Other highlights included the participation of APN grantee and alumni on two of three ASA panels sponsored by Carnegie Corporation of New York (CCNY). These panels brought together scholars selected on a competitive basis from the fellows, grantees, and alumni of programs supported by CCNY in Africa. Of the twelve participants, four were APN grantees and alumni: Azeez Olaniyan (IRG 2017), lecturer at Ekiti State University, Nigeria; Enock Makupa (IRG 2016), lecturer at the University of Dodoma, Tanzania; Eria Serwajja (IRG 2016), lecturer at Makerere University, Uganda; and Richard Alemdjrodo (IRG 2016), lecturer at the University of Lomé, Togo. Richard participated in the second CCNY session, “Creating an Ecosystem to Support Research and Researchers in Institutions of Higher Education in Africa," where he presented on “The Usefulness of African Diaspora Academics in African Universities.” The third CCNY session on “The Role of Resource Management in Conflict and Peacebuilding” featured Azeez Olaniyan: “Resource Redistribution Strategies and Peacebuilding Process in Nigeria's Oil-bearing Communities, 1999-2017;” Eria Serwajja: “Fractured Intimacy: Oil Induced Gender-based Violence in the "Oil-rich" Albertine Region, Western Uganda;” and Enock Makupa: “Conflict Prevention and Peacebuilding in Tanzania: Managing Relations between Investors in the Gas Extraction Sector and the Local Community in Mtwara.” During the closing ceremony, the four were formally recognized and given certificates in honor of their achievements.

Other presentations by former APN grantees at the 2017 ASA Annual Meeting were by: Cori Wielenga (IRG 2013), postdoctoral fellow at the University of Pretoria, "Restoring Social Harmony: Informal and Formal Justice Systems in Africa,” and Azeez Olaniyan, who gave another paper on "Innovative Anti-Corruption Measures and Institution Building in Nigeria.” Pamela Khanakwa (IRG 2015) of Makerere University also attended the conference. APN Advisory Board Chair Prof. Ismail Rashid was a panelist on the roundtable, "The Changing Role(s) of ECOWAS in the West Africa Region," while APN Advisory Board member Prof. Catherine Boone, chaired a panel on "Colonial Institutions and Taxation: Local Perspectives from British and French Africa.” Also, former APN Program Associate Dagan Rossini, now a fellow for the Young African Scholars Program at Yale University, participated in the “Innovations in Higher Education and Research in Africa” panel.

Another highlight of the ASA was the keynote address at the ASA Women’s Caucus luncheon on November 18, given by SSRC President Alondra Nelson. Her talk on “The Social Life of DNA: Creativity, Resilience, and Diaspora," was based on her most recent book, which explores the ways in which recent developments in DNA-based techniques are affecting contemporary issues around genealogy and race, including how some in the African diaspora are establishing ties to their African ancestral homelands.

The APN also hosted a networking dinner for past and present grantees who were participating in the ASA Annual Meeting, on November 17. Several APN advisory board members, APN program staff, and other SSRC staff, including SSRC Executive Program Director Ron Kassimir, were in attendance.

The SSRC marked its more than fifty years of engagement in Africa, with a dinner reception on November 18. The event was attended by over seventy SSRC fellows, affiliates, grantees, and staff. Ron Kassimir made the welcoming remarks on behalf of the SSRC, and a brief description of each of the SSRC’s Africa-related programs was given by the respective program directors: Cyril Obi of the APN, Thomas Asher of Next Generation Social Sciences in Africa, and Tatiana Carayannis of Understanding Violent Conflict. APN alumnus Cori Wielenga and former Next Gen fellow Ruth Murambadoro (2016 Doctoral Dissertation Research Fellowship), spoke about their experiences with the SSRC.