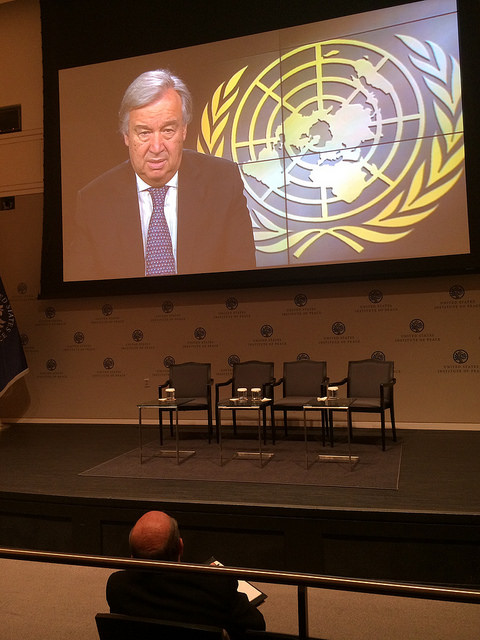 Participants listened to a pre-recorded video message from United Nations Secretary-General (UN-SG), António Guterres, who expressed his determination to put conflict prevention at the heart of the UN’s revamped peacebuilding agenda.  He was represented at the event by UN Assistant Secretary General for Peacebuilding Support, Oscar Fernandez-Taranco who gave the keynote address on sustaining peace. He reiterated the Secretary General’s promise to re-orient the UN towards preventing conflicts before they start as opposed to reacting to outbreaks of violence, and affirmed that peacebuilding would be not only a pillar of the UN’s peace and security agenda, but also a crucial part of its approach to development. In closing, Fernandez-Taranco challenged peacebuilders to do a better job of telling the story of what they do and how it contributes to peace.

The opening session was followed a panel on  peacebuilding efforts in Mosul addressed by Iraqi Ambassador to the United States, Dr. Fareed Yasseen; a presentation by Colombian Finance Minister, Mauricio Cardenas Santamaria, on “Innovative Approaches for Financing Peace;” and a panel discussion on “Reframing Radicalization to make Countering Violent Extremism more effective,” which challenged attendees to reconsider the reasons why some people become extremists while others, facing the same circumstances do not.

Other panels touched on matters of interest to peacebuilders, including marketing and advertising campaigns for non-profits and inter-faith peacebuilding initiatives. The latter session featured panelists from Bosnia-Herzegovina, the Central African Republic and the Philippines, who shared experiences about how religious peacebuilders have worked across faith lines to reconcile and heal divided societies. AfP President Melanie Greenberg also moderated a panel on “Moving Beyond Projects to Scaled Solutions in Fragile States” which focused on the mechanisms for scaling peacebuilding interventions in weak, war-torn states.

Overall, the conference succeeded in integrating the practical and the scholarly aspects of peacebuilding and providing a unique opportunity for scholars and practitioners to learn, interact and develop strategic partnerships. The AfP’s work to foster coherence and cooperation within the relatively new field of peacebuilding by convening researchers, practitioners and policymakers from a variety of institutions, mirrors much of what APN does in Africa. The APN was able to establish connections with the AfP and its partner organizations, which will widen the APN network within the United States and open the door for potential future collaborations. While the conference certainly included perspectives on Africa on matters such as elections and religious violence, attendees may have benefitted from a panel dedicated to the particular challenges and opportunities for peacebuilding research and practice in Africa. The APN left the conference with a greater awareness of the state of the field within the US, and with new and potentially productive relationships with peacebuilders from around the world.