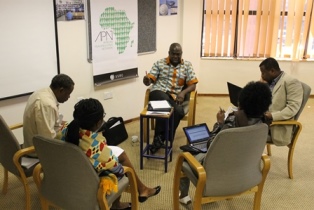 The African Peacebuilding Network (APN) held a methods training workshop at the University of Botswana (UoB) in Gaborone, Botswana. The workshop was hosted by the Department of Political and Administrative Studies, UoB, August 10–12, 2015.

The three-day workshop afforded the program’s 2015 cohort of individual research grantees an opportunity to refine their research designs, topics, and methodologies before conducting fieldwork and collecting data for their respective APN projects. As practitioners and junior, midcareer, and senior scholars, participants were engaged with a critical understanding of the context and politics of the peacebuilding and conflict nexus in Africa. It is expected that such interaction will feed into high-quality research outputs and contribute to the critical mass of highly skilled researchers conducting work in conflict-affected countries and post-conflict areas and regions of the continent.

The APN invited leading scholars and experts in African peacebuilding to challenge discourses and deliver lectures spanning issues related to research methods and best practices, ethical standards for research in Africa, gender mainstreaming, and institutional frameworks in the field of African peace and security. Lecturers included APN advisory board members Professor Ismail Rashid (Vassar College) and Dr. Thomas Tieku (King’s University College), as well as APN 2013 grantee Professor Kenneth Omeje (University of Bradford). These resource persons also served as key facilitators within smaller working groups, and spoke with each grantee one-on-one to further develop their ideas, research methods, and strategies for engaging with issues of measurement and analysis of quantitative and qualitative data.

Within each smaller working group, grantees had the chance to interact and develop constructive working relationships with other members of their cohort and exchange ideas. A representative from each group was then asked shared their observations and feedback with all attendees on the last day during a plenary session. It was widely agreed that there exists a need to advance African debates on peacebuilding and promote African perspectives. This sentiment was expressed by one participant who remarked, “As Africans, we need to generate our own knowledge.”

The program also invited several UoB staff and graduate students to sit in during the course of the workshop, to learn from and engage with these individual scholars working on peacebuilding issues in Africa. Participants included Batlang Seabo, Keratilwe Bodilenyane, Keneilwe Sadi Mooketsane, Ronald Badubi, Bontle Masilo, and Bakang Ntshingane.

The APN would like to thank the University of Botswana, and particularly the Department of Political and Administrative Studies, for hosting the event and their efforts to ensure a seamless workshop for all.