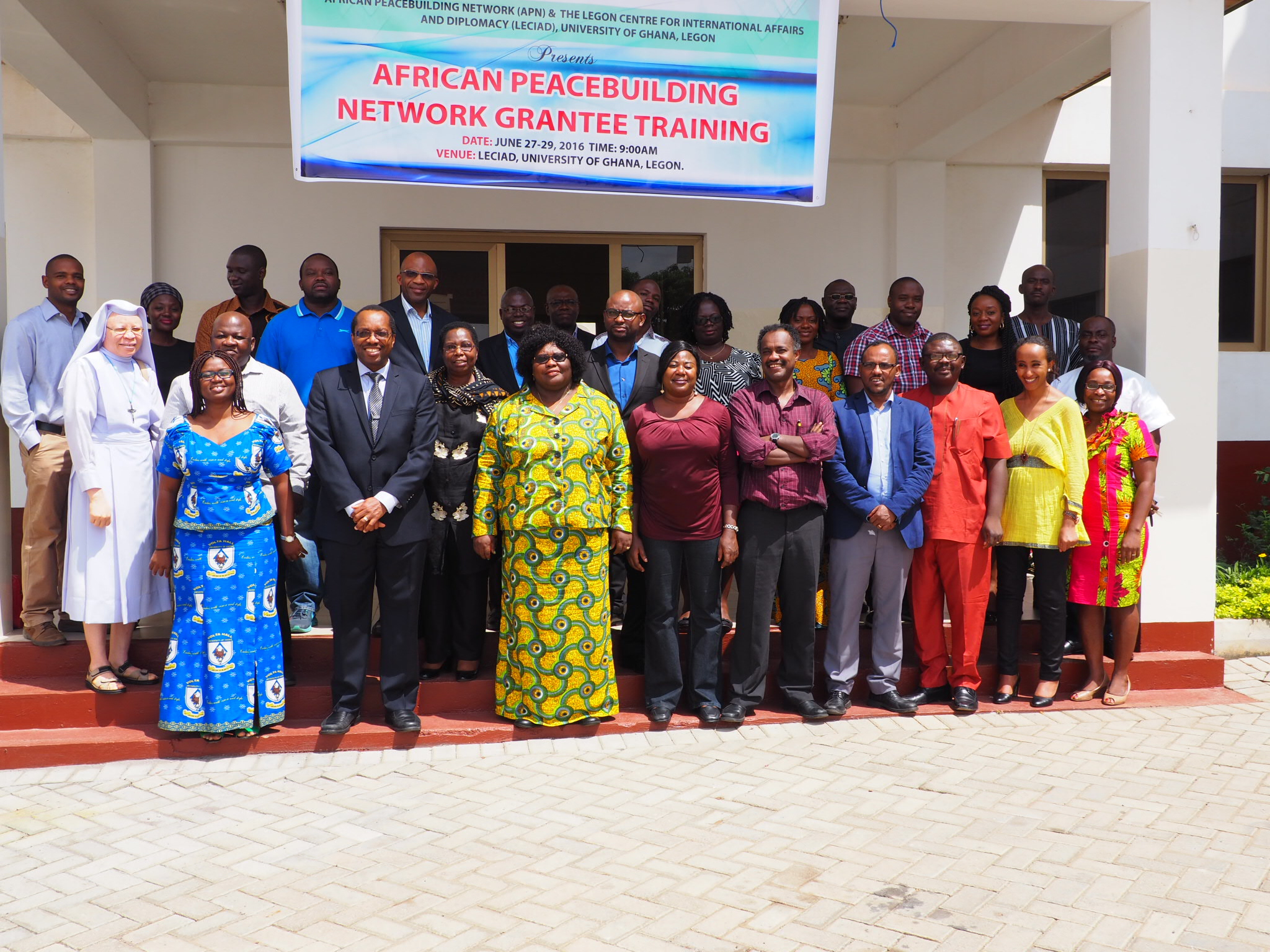 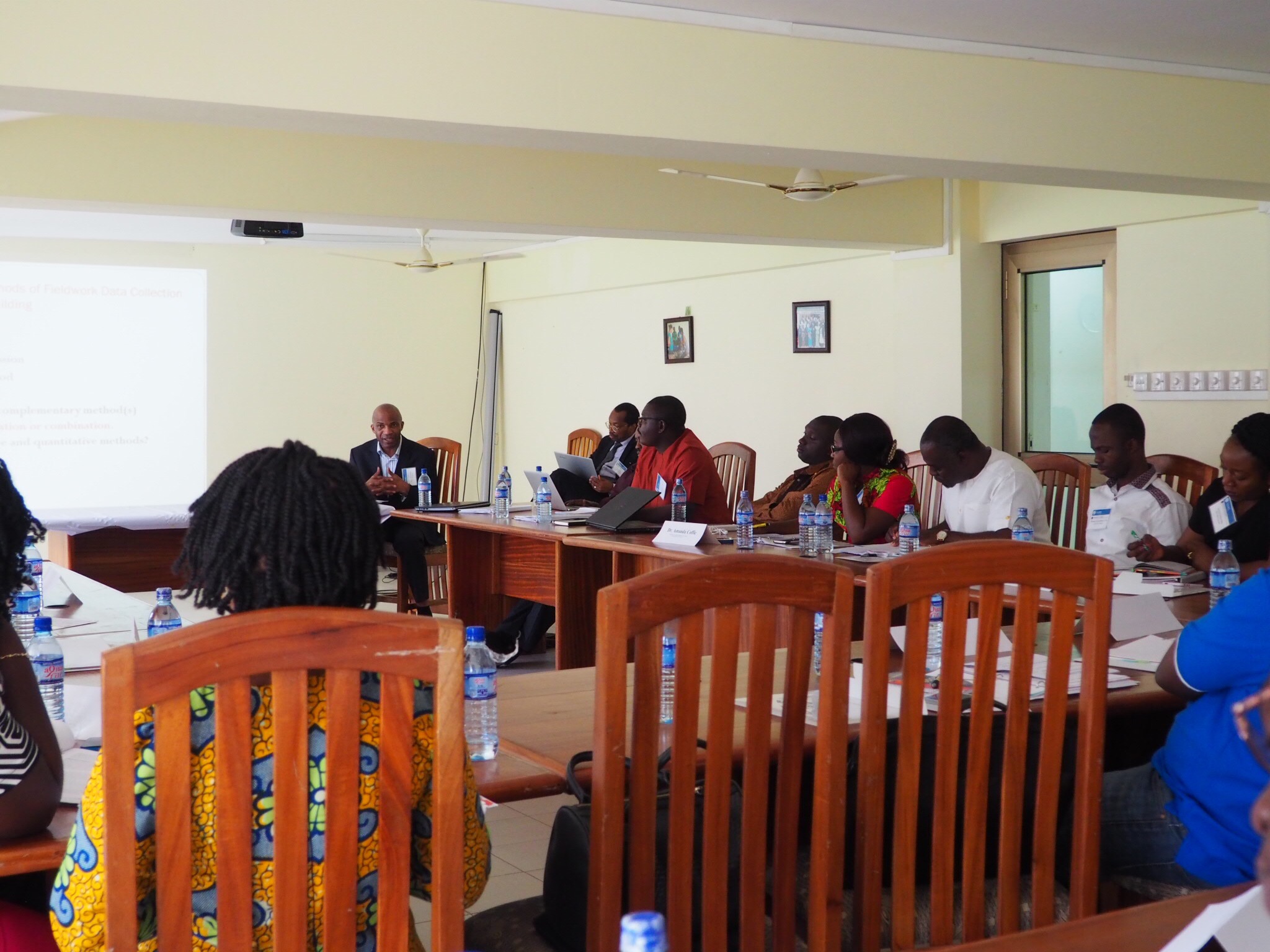 The African Peacebuilding Network (APN) conducted a three-day training workshop that focused on research methods training at LECIAD, University of Ghana, in the capital of Ghana, Accra. The opening event was covered by a cross-section of the local and national media: print, radio and television. Thanks to the APN’s partnership with LECIAD, the event was successfully held between June 27th and June 29th. This was APN’s first grantee training workshop in 2016, designated to prepare another cohort of APN individual research grantees as they head out for fieldwork related their research projects. Colleagues from LECIAD also participated in the workshop

Opening remarks were made by Professor Henrietta Mensa-Bonsu (Director, LECIAD) and Dr. Cyril Obi (Program Director, APN-SSRC). In her keynote address titled, African Solutions for African Problems: Where is the Research, Professor Mensa-Bonsu called for high quality research produced in the continent. In concluding her speech, she asserted that, “The slogan ‘African Solutions to African problems’ will remain hollow unless African researchers step up to the plate and produce relevant research to ground proffered solutions in local realities.”

The three-day workshop combined plenary lectures with group working sessions that were led and facilitated by five experienced scholars and practitioners. The following plenary lectures were delivered by Professor Ismail Rashid on The Ethics of Fieldwork in Conflict-affected Settings: What Works Best, How and Why, Professor Kenneth Omeje on Some Imperatives for Peacebuilding Research in Africa: A Critical Reflection on Qualitative Methods, and Professor Okey Ibeanu on Quantitative Methods for Peacebuilding Research in Africa: An Overview and Critical Reflections, Professor Thomas Tieku’s presentation focused on Understanding the Normative and Policy Frameworks of African Peacebuilding, while Professor Pamela Machakanja spoke about Mainstreaming Gender in African Peacebuilding Research.  Professor Audrey Gadzekpo, a former APN 2014 grantee who gave an interactive talk and shared her fieldwork experience with participants.

During the group working sessions, three grantees were assigned to each of the five working groups. Participants in each of the small groups presented their proposals, commented on each others’ proposals, and also received high quality feedback from colleagues. They also received expert advice on how to refine their focus and research methods by their respective group session leaders. Apart from listening to lectures and working within groups, grantees also had the opportunity to network and exchange ideas with highly experienced mentors and colleagues.

The workshop was concluded with a closing plenary and feedback session moderated by Prof. Gadzekpo where each group reported back on their activities and experiences to all participants and resource persons. All grantees agreed that the workshop had been “informative” and “insightful” and felt the workshop had been a great success. They described it as a useful experience in helping them refine their proposals and be better prepared for the upcoming fieldwork. Some of them expressed a strong desire to network with each other and start conversations on future research collaboration.