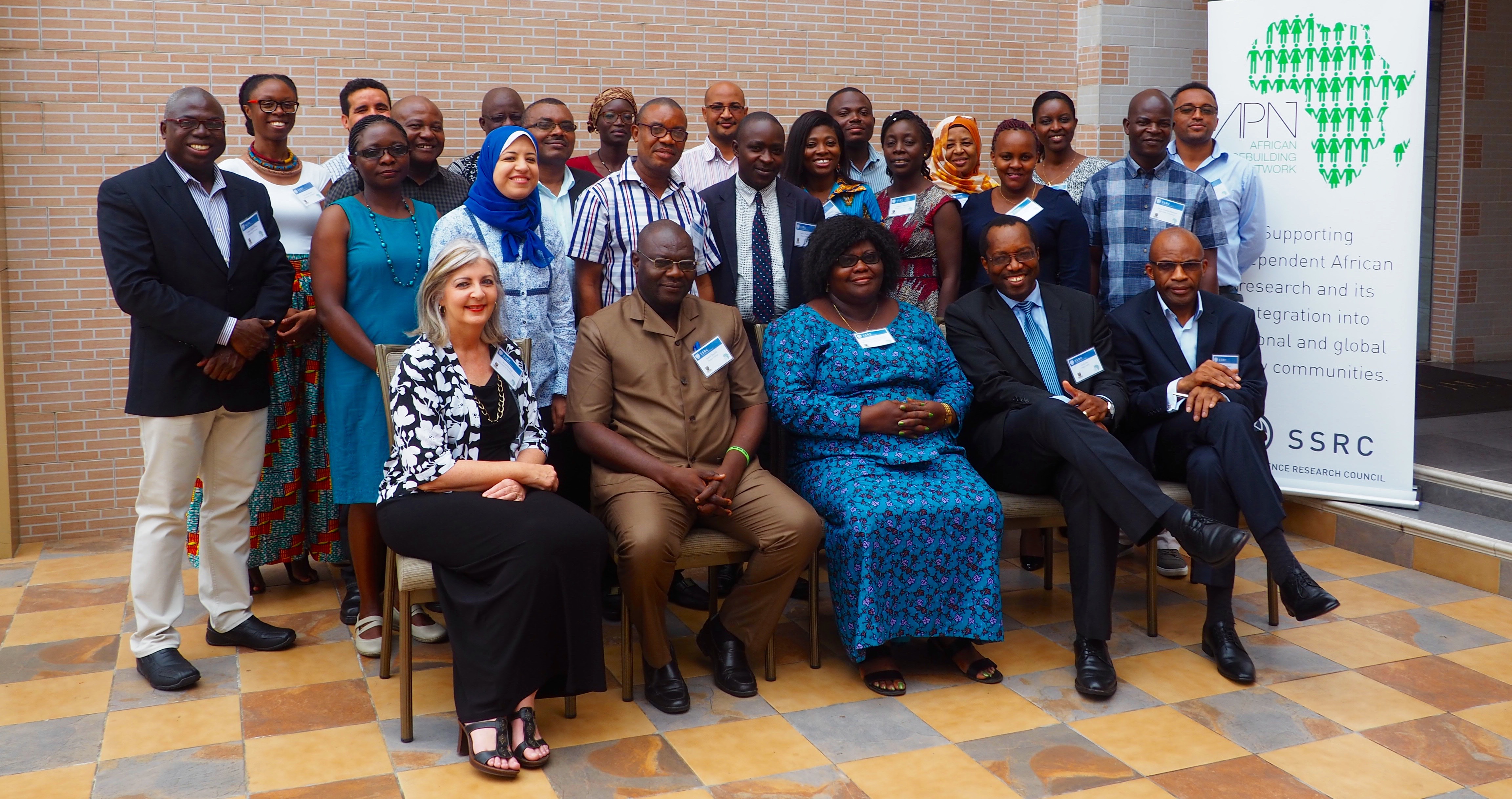 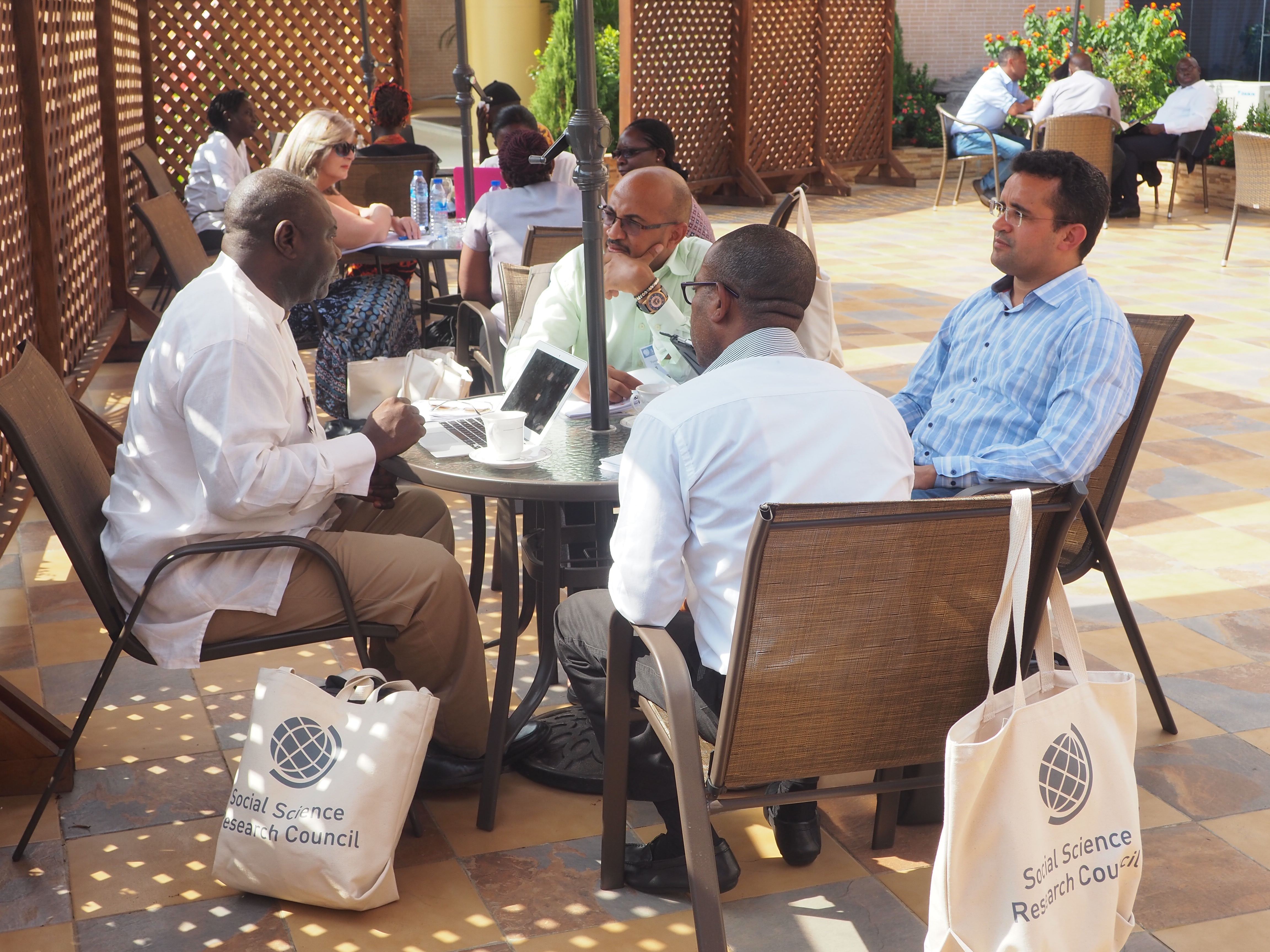 The African Peacebuilding Network (APN) of the Social Science Research Council (SSRC) conducted a three-day training workshop that focused on research methods for its 2017 cohort of Individual Research Grant recipients at the Tomreik Hotel, Accra, Ghana, in collaboration with the Legon Centre for International Affairs and Diplomacy (LECIAD) of the University of Ghana on June 20–22, 2017.

The 2017 Individual Research Grant cohort features sixteen individuals from twelve countries, including the APN’s first Individual Research Grant recipients from Egypt, Morocco, and Rwanda. Their research projects span a diverse range of topics related to conflict and peacebuilding, including land and resource-driven conflict, religious and ethnic tensions, questions of inter-gender cooperation, and cinema and radio as platforms for peacebuilding.

Opening remarks were made by Professor Henrietta Mensa-Bonsu, LECIAD director and APN Advisory Board member, as well as Dr. Cyril Obi, APN program director. Prof. Mensa-Bonsu warmly welcomed the new cohort of APN grantees to Accra, and underscored LECIAD and the APN’s shared goal of producing high-quality, evidence-based social science research in Africa. She also emphasized the importance of providing the findings from this research on security and conflict to policymakers in an accessible manner. Dr. Obi also underscored these points, while recalling the SSRC’s history of multidisciplinary, innovative, and policy-relevant research for public good. He highlighted this legacy in urging the Individual Research Grant recipients to apply the same principles to their research over the next six months and beyond.

The three-day training workshop combined lectures and interactive discussions with small working groups and one-on-one mentoring sessions led by experienced scholars, including APN Alumni as well as current and former APN Advisory Board Members. The working groups and one-on-one sessions gave attendees the opportunity to apply lessons from the lectures and discussions to their research, and to ask questions of and receive feedback from their mentors on how to continue to improve their research questions and designs prior to embarking on fieldwork.

Professor Heidi Hudson, director of the Centre for Africa Studies at the University of the Free State and an APN Advisory Board member, gave the first lecture of the workshop on “Towards an Integrated Postcolonial Methodology for African Peacebuilding.” She discussed the under theorized nature of peacebuilding, particularly in Africa, and how a great deal of existing scholarship promotes a view of Africa as a place where empirical, not theoretical, knowledge is created. As such, she encouraged the APN grantees to contribute to the bases of theoretical and empirical knowledge produced in Africa by Africans through their research.

The next lecture was given by Professor Kenneth Omeje, deputy director of the John & Elnora Ferguson Centre for African Studies at the University of Bradford. Prof. Omeje is also an APN Alumnus (IRG 2013) as well as a member of the APN’s Advisory Board. His presentation focused on “Peacebuilding Research in Africa: A Critical Reflection on Qualitative Methods.” He highlighted various issues for researchers to be aware of within qualitative research methods, including the importance of proper sampling in qualitative research methods and how to reconcile resource constraints with proper research design and ethical fieldwork conduct.

The following presentation by Professor Ismail Rashid on “The Ethics of Fieldwork-Based Research in Conflict-Affected Settings: What Works Best, How and Why?” then discussed some of the issues raised around research design and ethical fieldwork. Professor Rashid is a professor of history at Vassar College and currently the Chair of the APN’s Advisory Board. His presentation addressed how researchers mediate the ethical claims and difficulties raised by conducting research in an ethically charged field. Given that conflict and peacebuilding exist in a heavily contested ethical landscape, it is critical for researchers to reflect on these issues prior to—as well as during and after—conducting fieldwork.

Dr. Yolande Bouka’s presentation, “Conducting Fieldwork Research in Different African Contexts,” highlighted the importance of researcher positionality in research, as well as practical considerations for preparing for fieldwork. Dr. Bouka is a postdoctoral fellow at Sié Chéou-Kang Center for International Security and Diplomacy at the Josef Korbel School of International Studies at the University of Denver. She reflected on her personal experiences conducting research in several African countries, and emphasized how critical it is for African researchers to become sources of knowledge about the process of conducting field research itself, in addition to the knowledge produced by their fieldwork. During the workshop, APN Alumnus Dr. Fatma Osman Ibnouf (IRG 2015), now a Book Manuscript Completion grantee, also gave her reflections on conducting fieldwork as an APN grantee and advice for the new cohort to make the most of their time as grantees, both during their fieldwork and through the networking opportunities provided by the APN’s two workshops.

The final lecture was given by Dr. Amy Niang, a lecturer in international relations at the University of the Witwatersrand and APN Alumnus (IRG 2013), on “Mainstreaming Gender into Peacebuilding Research.” Dr. Niang highlighted the importance of making gender salient for all researchers, not merely those researching “gender” issues. Researchers must be aware of gender-sensitive methods and methodological tools for conducting field-based research, and of the debates in Africa on gender relations and constructions of masculinity and femininity. The presentation returned to the issue raised throughout the workshop on researcher positionality, and how a researcher’s gender may affect one’s ideas about gender, interaction with informants, access to individuals and communities or spaces, and opportunities for dissemination and policy recommendations.

On the workshop’s closing day, grantees participated in a plenary session in which a representative from each of the five working groups shared key takeaways from their discussions with their groups and mentors, as well as overall reflections about the workshop. They brainstormed ideas for maintaining contact with one another, as well as with their mentors.

Dr. Obi closed the workshop by thanking all of the participants for their hard work over the three days, and wishing them well as they embarked on their APN-supported fieldwork. He reiterated his call for innovative, multidisciplinary, and policy-relevant research, and emphasized the willingness of the APN and the workshop’s mentors to continue to serve as resources throughout the research process.