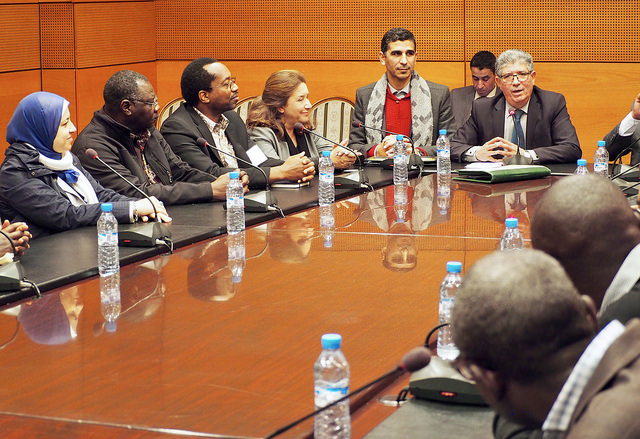 The African Peacebuilding Network (APN) of the Social Science Research Council (SSRC) held a three-day training workshop on writing and dissemination for its 2017 cohort of Individual Research Grant (IRG) recipients in Rabat, Morocco from December 11–13. The workshop was organized in collaboration with the African Institute for Peacebuilding and Conflict Transformation (AIPECT), an independent Moroccan NGO working to enhance peace pathways in Africa.

The 2017 IRG cohort featured sixteen individuals from twelve countries, including the APN’s first IRG recipients from Egypt, Morocco, and Rwanda. The workshop focused on the writing and dissemination of grantees’ research findings following six months of APN-supported field-based research projects and is a follow-up to a prior workshop on research methods, which was held at the beginning of the grant period from June 20-22, in Accra, Ghana. It combined lectures and interactive discussions with small working groups and one-on-one mentoring sessions led by experienced scholars, including APN Alumni, and current and former APN Advisory Board Members. Topics included policy writing, academic publishing, theoretical frameworks in peacebuilding, and the use of new and social media to share research results and information about publications.

Opening remarks were given by special guests Professor Mohamed Ayat, special advisor to the Prosecutor of the International Criminal Court (ICC) on cooperation with the Middle East and North Africa, and Phinith Chanthalangsy, head of the Social and Human Sciences section at the UNESCO office for the Maghreb in Rabat. Professor Ayat, who also served as senior legal advisor to the Prosecutor of the International Criminal Tribunal for Rwanda, and UN Independent Expert on the Human Rights Situation in Cote d’Ivoire, encouraged participants to challenge the narrative that “civil wars in Africa are based simply on identity,” and to continue to probe how competition for resources and bad governance drive conflict on the continent.

Mr. Chanthalangsy advocated for the strengthening of the research-policy nexus, referring to UNESCO’s commitment to embed empirical research findings into its policy agenda. He applauded the APN’s efforts to empower African scholars to produce and disseminate the crucial knowledge needed to address pressing policy questions. APN Program Director Dr. Cyril Obi welcomed participants and spoke to how the workshop aligned with the APN’s goal of promoting the visibility of African research globally, and connecting grantees’ research-based outputs to African peacebuilding policies and actions. He also emphasized the APN’s commitment to facilitating networking between African researchers, and collaborating with African institutions to mentor, inspire, and produce a new generation of African researchers and practitioners.

The first presentation, “Perspectives on Peacebuilding in Africa,” was given by Thomas Tieku, a professor at Western University’s King’s University College, and a former APN advisory board member. He gave an overview of the main schools of thought within the field of peacebuilding and the ongoing debates between them, encouraging grantees to familiarize themselves with the broader literature in order to be able to situate their research in existing knowledge, contribute to ongoing conversations, challenge existing theoretical frameworks, and address gaps in the academic literature.

The next lecture was given by AIPECT President Mohamed Gain, a professor at Ibn Tofail University in Kenitra, Morocco. His presentation, “African Peace and Security Architecture (APSA) and the Challenge of Peace and Security in North Africa,” critiqued the African Union’s (AU) African Peace and Security Architecture (APSA): the structures, principles, and decision-making processes related to conflict prevention and management in North Africa. He used the AU’s responses to the crises in Libya and Mali as case studies to demonstrate the systemic challenges facing the APSA. His presentation invited grantees to think about the large-scale, structural approaches to peacebuilding policies implemented at the regional and continental levels, and how their own research fits into, and can influence the broader institutional peace and security landscape in Africa.

Dr. Yolande Bouka’s presentation, “Transforming Research Findings into Policy Inputs: Things to note when writing for a policy audience,” provided grantees with deep insights into the skills and knowledge required to write for, and be read by diverse audiences—particularly, scholars, policy-makers and practitioners. Dr. Bouka, a postdoctoral fellow at the Josef Korbel School of International Studies at the University of Denver who has written extensively on gender and security from a policy angle, argued that the disconnect between academia and policy circles is unnecessary and unproductive since the incorporation of research findings can lead to improved real-world outcomes. She encouraged participants to take into account the institutional constraints of their policy audience, and demonstrated how to structure, target, and disseminate policy briefs and reports for readability, and maximum impact.

Dr. Amy Niang, a senior lecturer in International Relations at the University of Witwatersrand, presented on “Strategies for Disseminating Research Findings through Peer-reviewed Journals.” An APN alumnus (IRG 2013) and new member of the APN advisory board, Dr. Niang spoke to different formats of academic writing, and reflected on publishing as a practice embedded in the scientific research process. She also gave practical advice on crafting research questions of academic value and interest, as well as how to identify the appropriate journal for specific manuscripts. Dr. Niang also discussed how to navigate the political economy of scholarly publishing in Africa, an arena in which Africans are poorly represented among the ranks of norm enforcers and gatekeepers.

The next presentation was given by Dr. Rhuks Ako, a senior research fellow at the Institute for Oil, Gas, Energy, Environment and Sustainable Development (OGEES) at Afe Babalola University, Nigeria, and a former member of an APN Collaborative Working Group (2014-2016). In his lecture on “Understanding the Gaps in the Natural Resource—Conflict Nexus in African Peacebuilding,” Dr. Ako drew upon his experience of researching and publishing in the field of environmental law, to take participants through the process of developing a theoretical framework for academic writing in the resource conflict-peacebuilding nexus. He also advised that African scholars improve their ability to engage with global discourses and international audiences when writing about local issues.

Former APN grantee Dr. Duncan Omanga (IRG 2014), head of the Department of Publishing and Media Studies at Moi University, Kenya, gave the next presentation on “Disseminating Research Findings through New and Social Media and Web-Based Platforms: What Works Best, Why and How?” Pointing to the alarmingly low readership of academic journal articles, Dr. Omanga encouraged participants to make use of mainstream media, blogging, and social media to improve the visibility of their research and increase their readership. Dr. Omanga, a media scholar, and successful newspaper columnist, shared strategies for writing for a general audience, including how to adapt language and style to make writing more accessible; how to work with newspaper editors; and how to manage new, and social media accounts professionally.

The next event took the form of a lecture, and an interactive roundtable discussion, featuring the chair of the APN advisory board Professor Ismail Rashid of Vassar College. He first gave a talk on “Writing on African Peacebuilding: Reflections on Personal Experiences,” in which he took participants through a personal journey of the steps and various stages that he traversed in writing and publishing his latest book on West Africa’s Ebola Epidemic: Towards a Political Economy, an edited volume that addresses the Ebola crisis through the lens of political economy. He also described the collaborative process of developing an overarching framework for the book, going through the challenging peer-review process, and working with publishers to make the book available in Africa. Following his talk Prof. Rashid was engaged in a roundtable discussion moderated by Jihad Balghzal, program manager for the Mediator for Democracy and Human Rights, a Moroccan NGO. Ms. Balghzal also asked him about the motivations behind his academic research and writing, and the inspiration behind the choice of subject for his latest book. In response, Professor Rashid said that as an African scholar, he feels an obligation to use his skills to produce and curate knowledge about issues affecting Africans, including the Ebola crisis. He added that he hoped to leverage his platform to “speak back” to Western scholars who have for so long dominated the discourse concerning peacebuilding in Africa.

During the final plenary session, representatives from each of the small working groups gave feedback on their experiences at the workshop. This gave grantees an opportunity to reflect on their small working group and one-on-one sessions, during which participants had their manuscripts constructively critiqued by well-published senior scholars, as well as their peers. The wrap-up session allowed grantees to express the value of these working group sessions to their research projects. They described how the presentations and mentoring sessions contributed to various insights and breakthroughs, and how several connections were made between grantees working on similar or complementary topics across, national, regional, and disciplinary boundaries. While some resolved to make minor changes to their research questions to make better use of their data, others had to address methodological concerns, structure, or provide additional background information. Many of the manuscripts will be revised and submitted to peer-reviewed journals in the coming months.

The workshop also included several program outreach, networking, and policy engagement activities aimed at linking scholars and policy practitioners. On December 12, workshop participants visited the Parliament of Morocco, where they sat in on a session of the House of Councilors (upper house) and received an official welcome from the deputy speaker. They were then formally received and addressed by Ahmed Touizi, Secretary General of the House of Councillors. The delegation also visited the Rabita Mohammadia des Oulemas, a religious research institute and peer education program focused on youth outreach with the goal of promoting positive values and preventing the spread of extremist ideologies. The group was addressed by Dr. Mohammed Belekbir, director of the Center for the Study of Values at the Rabita Mohammadia.

On December 13, workshop participants visited the National Human Rights Council of Morocco (CNDH), an independent organization mandated to protect citizens’ rights and freedoms. There they were addressed by Director of Communications Merouane Touali, and Head of Public Relations Abdelghani Berdi, who explained the mission of the CNDH and fielded questions from the APN delegates. At each of these engagements APN program director Cyril Obi took the opportunity to speak about the mission of the SSRC and APN, including the commitment to research for the public good, support for innovative research, and the nurturing of future generations of scholars.

The APN also organized a series of cultural excursions during the workshop, which allowed participants to experience Rabat’s rich history. On December 12, participants toured the Medina of Rabat (old city) before enjoying a traditional Moroccan meal at Dar Rbatia restaurant, where live traditional Berber music accompanied dinner. On December 13, the APN delegation visited the Mausoleum of King Mohammed V of Morocco; and Hassan tower, the minaret of an incomplete mosque, which dates back to 1195.