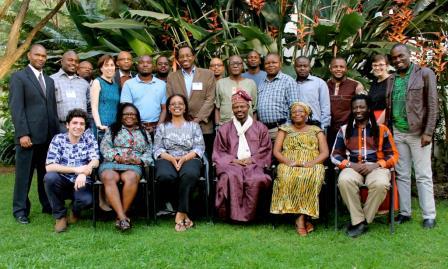 The African Peacebuilding Network (APN) held a second training workshop for its 2014 cohort of individual research grantees and residential postdoctoral fellows at the Arusha Hotel, Arusha, Tanzania, January 26–28, 2015. The workshop, which followed six months of field research and three-month postdoctoral residencies for grantees and fellows, respectively, equipped them with the writing and dissemination skills and practices necessary to translate the results of their evidence-based research into high-quality, peer-reviewed publications and other forms of knowledge.

The APN invited leading scholars and experts in African peacebuilding—many of whom serve on international and regional peer-reviewed journals and other publications, as either editors or editorial board members—as well as publishers and experts in digital communications, to deliver lectures and facilitate writing and dissemination sessions. Their presentations critically examined the context and politics of the conflict-peacebuilding nexus in Africa and highlighted the best ways to promote the cohort’s research findings within an expanding network. Emphasis was also placed on both traditional and emerging forms of knowledge dissemination, including e-publications, new and social media, and open access. The presentations were followed by question-and-answer sessions and lively debates.

A presentation was also made by International Law and Policy Institute (ILPI) senior partner and director of the ILPI Centre for African Studies Kjetil Tronvoll and former APN grantee (2013) and ILPI advisor and Tanzanian representative Nicodemus Minde. Their presentation focused on the ILPI’s main areas of expertise and work on bridging the gap between academia and policy.

The cohort, composed of junior, midcareer, and senior scholars and practitioners working across various institutions and universities in Africa, also had the chance to interact and further develop working relationships with one another and exchange ideas within smaller training groups. These groups allowed participants to crystallize their ideas about publishing their research results (i.e., where and in what form) and get constructive feedback on their draft publications from workshop leaders. The cohort found the mentoring they received useful and informative, and they left the event feeling excited by the prospect of their research being translated into impactful knowledge. Going forward, APN staff hope that such knowledge can be made easily accessible and used to inform various national, regional, and global scholarly, policy, and practice communities, thus helping to shape an African-centered peacebuilding agenda.

A public event was also held on the morning of the third day, organized in collaboration with the African Leadership Centre. The Honorable Abdullah Ally Hassan Mwinyi, chair of the Committee on Regional Affairs and Conflict Resolution (RACR) of the East African Legislative Assembly (EALA), delivered the keynote address on “The Challenges of Regional Integration: The Case of East Africa.” This was followed by a panel discussion with other members of RACR, including the Honorable Abdul Karim Harelimana (Rwanda), the Honorable Mike Kennedy Sebalu (Uganda), and the Honorable Abubakar Zein Abubakar (Kenya). The forum allowed participants an opportunity to engage directly with key policy actors and learn about EALA’s work, thereby exposing them to the crucial role legislators play in resolving conflicts and shaping peacebuilding processes in Africa, as well as the importance of regional approaches to peace and security.