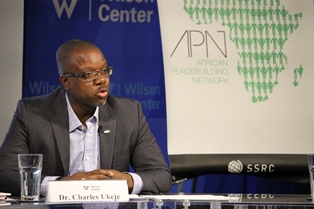 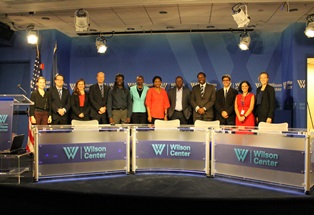 The African Peacebuilding Network (APN), in collaboration with the Africa Program at the Woodrow Wilson International Center for Scholars, jointly held a two-panel discussion focusing on “Present & Future Trajectories of Terrorist Groups and Armed Non-State Actors in Africa.” The first panel focused on North Africa, West Africa, and the Sahel, while the second panel focused on the Niger Delta and the Horn of Africa. Both panels were meant to facilitate constructive dialogue amongst an audience of scholars, policymakers, diplomats, consultants, advocates, and members of nongovernmental organizations from Africa and the United States. The event took place October 22, 2015, in Washington, DC.

This discussion was premised on the understanding that insurgents, terrorists, and other non-state armed groups greatly influence and shape political and security policy across the African continent. For this reason, both panels discussed the recent emergence of violent extremism, and how there exist a variety of contributing factors—such as religion, ethnicity, identity, as well as  economic, environmental, and social discourses—that result in individuals turning to violence within their communities. Panelists expressed concern over widening socioeconomic inequality and the inefficiencies within governing bodies, which were suggested to have aided the spread of violent extremism. They also spoke about how a lack of support from state institutions to aid positive change within civil societies only fuels the growth of violence and extremism. Each panel was then followed by a moderated session of Q&A with members of the audience.

Dr. Ogenga spoke to ways in which the media represents terrorists and terrorism, and how that representation affects policy decisions surrounding peace and security. He also spoke both to the risks embedded in media reports that could lead to wrongful profiling of people, as we all as the risks of spreading fear and insecurity among the populace. His solution was a hybrid form of peace journalism, assumedly to avoid the risks of “alarmist reports.” Prof. Ukeje spoke on how states are unable to reach impoverished rural communities, leaving them more susceptible to terrorist or armed non-state actors looking to recruit members. He also emphasized the importance of de-radicalization projects, and pointed to the need for governments to win the hearts and minds of their citizens and deny terrorist groups of potential recruits.

Speaking on Boko Haram in Nigeria, Ms. Hassan advocated for conversations to be had with people who are actually suffering from the violence, and suggested a new holistic approach to fighting extremism. This includes the involvement of grass-root organizations capable of raising issues of accountability within the community, addressing existing socioeconomic inequalities, and assisting in restructuring of identity at the national level. She also observed that the option of granting a blanket amnesty to the insurgents, rather than being a positive step toward peace, would only invite more grievances in the local communities that have been threatened and blackmailed by the terrorist group.

Ms. Datta addressed the nature of  porous borders within the Niger Delta and the Horn of Africa, speaking on how these loose borders allow the cross nature of regional markets to form communal tribal relations, resulting in the formation of prosperous economic systems that governments are otherwise unable to provide. This porousness, along with ignored tribal community plights such as environmental degradation and economic decline from government authority, has fostered the spread of violent extremists groups such as Boko Haram. In speaking to this, she reiterated the point that governments must not restrict civil society organizations, and that leadership must come from local authorities. She also spoke on the importance of citizen responsibility to combatting violence, and the inclusion of civil society actors in decision-making processes.

In his presentation, Dr. Nickels spoke about terrorism in northwest Africa being prevalent and representing deep trouble for the nation-state model. He observed that “Terrorism in northwest Africa is going to get worse before it gets better,” noting that many groups that make it past one year of existence are likely to persist. In saying this, he emphasized the need for policymakers of different nation-states to partner more effectively with one another to contain and counter violent non-state actors. In doing so, they should have more direct and frank discussions about differing objectives and roles, and understand the need to share security cooperation plans early and often. He also stressed the importance of blocking the spread of terrorism and planning for the aftermath once armed groups have been defeated, suggesting that policymakers craft subtle policies that would widen the spread of governments’ influence, but without securitizing the populations.

Both panels recognized the advantages in bridging the gap between academic and policy audiences. Overall it was concluded that terrorist groups in Africa and other non-state armed actors will continue to grow and gain salience in Africa among unemployed and under educated youth unless more opportunities for access to education and economic prosperity are provided by governments. It was also agreed that in order to empower civil society, local authorities and grassroots organizations must be more involved in the fight against extremism and included in decision-making processes. The emerging consensus was that de-radicalization and reintegration methods for armed actors must be used by states as well as international, regional, and local organizations to counter violent extremism.