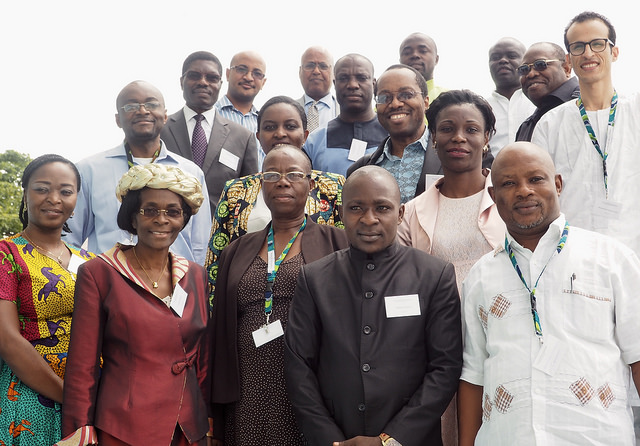 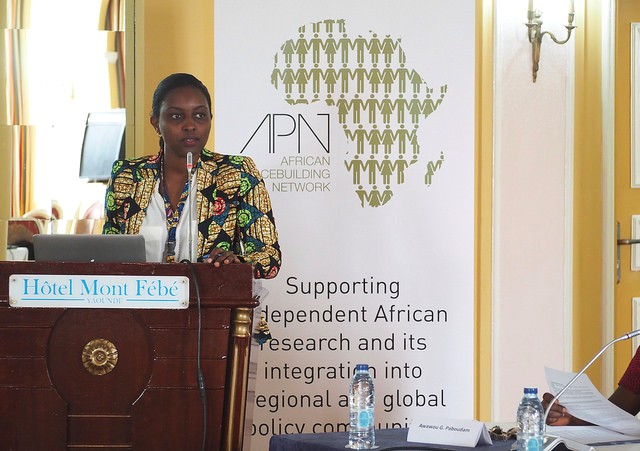 The Nordic Africa Institute (NAI) in partnership with the African Peacebuilding Network (APN) of the Social Science Research Council (SSRC), and in collaboration with the International Multilateral Shared Cultural Organization (IMSCO), organized a Brainstorming Workshop on Regional Economic Communities (RECs) and Peacebuilding in Central Africa. The workshop, held in Yaoundé, Cameroon from February 26-27, 2018, was a follow-up to policy dialogues held in Rabat, Morocco in 2017, and Abuja, Nigeria in 2016. The event brought together twenty scholars and practitioners from eight African countries, including four APN Alumni, to assess, compare, and make recommendations on the role of Central African regional organizations in conflict management, peacekeeping, and peacebuilding.

Prof. Victor Adetula, Head of Research at the Nordic Africa Institute, and APN Program Director Dr. Cyril Obi, delivered the opening remarks outlining the rationale of the workshop and its expected outcomes. Prof. Adetula explained that the workshop would examine the extent to which the African RECs (particularly those in Central Africa), whose roles have expanded beyond economic integration, are carrying out a peace and security mandate — and how this relates to other development issues in the region. Dr. Obi added that in addition to winning peace, peacebuilders must turn their attention to consolidating peace, which requires a different set of strategies. Peace, he added, is not merely a condition but also linked to structures and processes. He also emphasized that the knowledge produced through this series of policy dialogues was cumulative, with each building on the last.

IMSCO Vice President Prof. Apollinaire Amougui Tite opened proceedings with a presentation on “Conflict Trends and Patterns in Central Africa,” which gave an overview of the state of peacebuilding in the region. He argued that many peacebuilding initiatives fail because of the overemphasis on institutions defined by Western law and state structures, and a tendency to ignore cultural context — including various traditional structures and mechanisms well-suited to particular situations. Prof. Amogui proposed a synthesis of traditional and borrowed values with regard to institutions, laws, and culture, citing the example of Rwanda’s Gacaca courts, among others.

APN grantee Chantal Ingabire (IRG 2017) gave a presentation on “Mainstreaming Psychosocial Support: Experience from Rwanda,” based on APN-supported research, which advocated for the integration of psychosocial approaches into peacebuilding in post-conflict states in Africa. She emphasized that peace is not simply about ending violent conflict but also needed more research to improve understanding of the emotional, social, and psychological effects of conflicts on individuals and their interpersonal relationships. She used Rwanda as an example of how homegrown justice mechanisms, peace education programs, social protection programs, and psychosocial support initiatives can contribute to resilience and peacebuilding.

In her presentation on “Violent Conflicts in Central Africa and the Neglected Gender Question,” Prof. Rachel-Claire Okani of the University of Yaoundé II highlighted the important role that global and regional institutions have played in advancing African women’s rights through various United Nations (UN) and African Union (AU) protocols and resolutions, including the Maputo Protocol and UN Security Council Resolution 1325 on women, peace, and security. She urged regional organizations to train, resource, and empower women to play a larger role in peace and security, particularly in Central Africa.

Prof. Valerie Tanga of the University of Bangui, Central African Republic (CAR), addressed the question of “Civil Society and the Promotion of Peace in Central Africa.” She argued that the politicization of civil society organizations (CSOs) in Central Africa has engendered distrust between the politicians and civil society. She called for reforms to address the lack of cooperation between civil society groups in central Africa, the lack of sustained engagement with communities, the mixing of private political agendas with the work of CSOs, and to encourage leadership transitions in CSOs, which tend to be dominated by a few individuals for a prolonged period of time.

The third plenary session was opened by M. Bekelo of the French Academy of Pharmacy, who presented on “The Scourge of the HIV/AIDS in Central Africa and the implications for Regional Peace and Security.” He observed that people who are unable to take care of their basic health needs are more vulnerable to the poverty and desperation that make recruitment into armed groups more likely. He called for substantial socio-economic reforms that address this risk by subsidizing healthcare costs and improving access to locally produced medications.

In the next presentation, Mohammed Gain, President of the African Institute for Peacebuilding and Conflict Transformation (AIPECT) and Professor at Ibn Tofail University, Morocco, spoke on “Climate Change, Peace and Security in Africa.” Prof. Gain suggested that due to the transboundary nature of these challenges, regional organizations should play a key role in solving them, specifically, by mobilizing financial resources to do vulnerability assessments and fund research; ensuring the political willingness of member states to cooperate with existing and new rules; and using their collective political and diplomatic strength to exert influence on international climate agreements.

Plenary session four was a special APN panel featuring APN Program Director Dr. Cyril Obi and two former grantees, Aloysius Ngalim (IRG 2013) of the University of Buea, Cameroon, and Tamer Abd Elkreem (IRG 2017) of the University of Khartoum, Sudan, both of who reflected on their recent research and experiences as APN grantees. Dr. Obi’s presentation “Peacebuilding in Africa: What Roles for Scholars and Practitioners” addressed the respective roles of African scholars and policy practitioners and how to improve understanding and cooperation for sustainable peacebuilding. He noted that while scholars engage in research-driven knowledge production, practitioners have the skills necessary to manage and implement policies to resolve conflict and achieve peace. He recommended that engagement be conceived of as a sustained dialogue (process) involving researchers, practitioners, and policymakers. Dr. Obi however recognized that peace is ultimately political involving debate, the balancing of various interests, and compromise.

Dr. Ngalim discussed his research on the farmer-herder conflict in Central Africa and expressed the need for a robust regional framework to handle the crisis due to its transboundary nature. He called for a multi-pronged approach and greater cooperation between countries in the region on improving access to markets, regulating trans-border mobility, and incentivizing pastoralists and farmers to embrace peace. Dr. Elkreem discussed his research on the tensions developing between the state and society in Sudan due to massive development projects such as the Gezira Irrigation Scheme, that have not taken local communities or livelihoods seriously. He added that scholars conducting research at the grassroots level can produce knowledge capable of promoting harmonious state-society relations. Development policies that only take elite interests into account, he argued, will lead to increased tensions and potentially to conflict.

Dr. Chris Kwaja of Modibbo Adaba University of Technology, Nigeria, spoke on the “Challenge of Regional Peacebuilding in the Lake Chad Basin.” He argued that the transnational security challenges posed by violent extremism in the region can only be dealt with through collective action. He identified some of the impediments to collaboration as including weak or non-existent transnational mechanisms for cooperation on justice; heavy dependence on foreign funding; and an inability to properly regulate the flow of foreign fighters across national borders due to weak state presence in peripheral areas.

APN grantee Delmas Tsafack (IRG 2017) presented on “Cameroon’s contribution to Regional Security in Central Africa.” He highlighted Cameroon’s prominent role in regional peacekeeping operations, which includes allowing intervening countries and organizations to use its transport infrastructure, and hosting an African Standby Force logistics base. He emphasized that it was in Cameroon’s national interest to see the conflict in neighboring CAR resolved, which explains its commitment to the United Nations Multidimensional Integrated Stabilization Mission in the Central African Republic (MINUSCA).

José Saleh Baruani of the Protestant University of Congo, DRC, spoke on “Regional Approaches to Managing Conflicts in DRC.” He attributed the difficulty of regional cooperation on the Congo crisis to a lack of capacity and willingness on the part of the various actors. Dr. Baruani also noted that regional and international actors sometimes have divergent interests, which further complicates the conflict and exacerbates the government’s inability to maintain territorial integrity.

Overall, the discussions during the brainstorming session were engaging and productive; some recommendations will be shared with stakeholders at the national and regional levels. A formal report will be released in the coming weeks outlining the way forward with regard to future research agendas and policy recommendations.