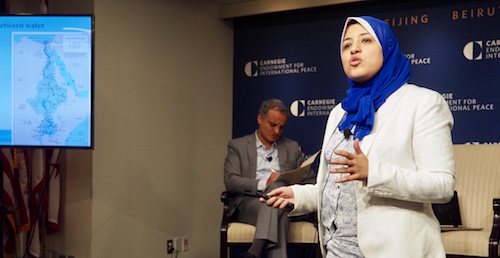 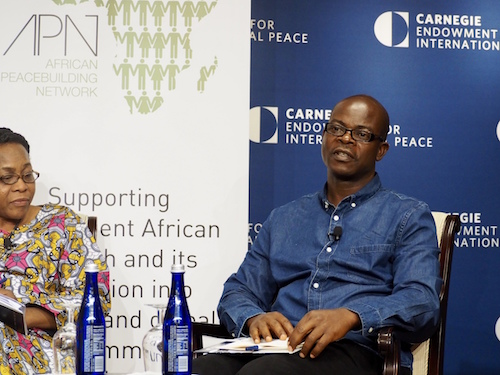 The Carnegie Endowment for International Peace (CEIP), in collaboration with the African Peacebuilding Network (APN) of the Social Science Research Council (SSRC), hosted a conference on Governance and Security in North Africa and the Sahel, in Washington, DC, on May 8, 2018. The day-long event brought together leading scholars, policy analysts, and practitioners from Africa and around the world to address the critical political, peace, and security issues as they relate to the changing political and socioeconomic dynamics within the Maghreb-Sahel region and North Africa, and their broader ramifications. Among the presenters were two APN Alumni—Dr. Azeez Olaniyan (Individual Research Grant recipient, 2017), and Dr. Rawia Tawfik (IRG 2017).

The discussions centered on the main governance challenges facing North Africa and the Sahel, and how these problems impact regional security. Among the governance issues addressed were corruption, economic inequality, identity politics, activities of jihadi groups, resource competition, elections and political legitimacy, and weak state capacity. Panelists assessed and critiqued many of the ongoing initiatives to counter transnational terrorism, organized crime, and the migration crisis while focusing their analyses on the root causes of conflict and instability.

Dr. Cyril Obi, the APN program director, and Dr. Michele Dunne, director and senior fellow in Carnegie's Middle East Program, opened the conference and welcomed the attendees. They highlighted the importance of exploring the relationship between security and socioeconomic issues, as well as fostering dialogue between scholars from the Sahel and North Africa, and the West. Dr. Obi noted that “governance is a key feature of any security landscape,” and that a greater understanding of the link between governance, development, religion, and security is required to address the root causes of conflicts in the Sahel and North Africa.

Dr. Dunne moderated a session on “Contestation and Adaptation in the Maghreb,” which addressed recent developments in Morocco, Tunisia, and Algeria. APN Advisory Board Member Prof. Anouar Boukhars argued that the “palpable economic dynamism” in Morocco risks being undermined by internal regional economic inequalities, which could pose a national security threat. Sara Yerkes, a senior fellow in Carnegie’s Middle East Program, explained that the recent peaceful local elections in Tunisia, which witnessed a degree of political power being devolved to local levels, marked an important step towards democratic consolidation in the post-Arab Spring nation. Prof. Azzedine Layachi of St. John’s University described Algeria’s current situation as one of economic, leadership, and security uncertainty, due to both external security threats (from the Sahel to its South and Libya to its East) and potential domestic unrest.

APN Program Director Cyril Obi moderated the second panel on “The Challenges of Governing and Development in the Sahel,” which featured APN Alumnus Dr. Azeez Olaniyan (IRG 2017) of Ekiti State University, as well as Prof. Boubacar N’Diaye of Wooster College, Ibrahim Yahya Ibrahim, a PhD candidate at the University of Florida, and Prof. Ousseina Alidou of Rutgers University. Panelists analyzed the current political situations in Mali, Mauritania, Burkina Faso, Nigeria, Chad, among other countries, with an emphasis on insecurity, violent extremism, corruption, and economic underdevelopment.

Prof. N’Diaye linked insecurity in the Sahel directly to bad governance, referring to the predominant model in the region as “resource kleptocracy.” He attributed the situation to collusion between the military and business elites, as well as exclusionary economic practices often based on ethnicity. He observed that despite the fact that youth in the region are trying to articulate an alternative narrative, politicians in countries such as Mali and Mauritania have been unable to provide a viable political alternative. Prof. N’Diaye also spoke to the broader, but often overlooked threat to human security posed by food insecurity and poverty. .

Ibrahim Yahya Ibrahim, a Ph.D. candidate at the University of Florida, highlighted two reasons for the increased fragility within the region and the creation of fertile conditions for the emergence and operations of jihadi groups, especially in rural areas. 1) the transfer of power from traditional authorities with local legitimacy to elected local bodies, 2) increased pressure on natural resources, especially land, due to growth in human and animal populations. Jihadists, he argued, have successfully tapped into the alienation and desperation in these peripheral areas to advance their goals.

Prof. Alidou focused on the impact of conflicts in the Sahel on women and children, noting that their suffering has been the most severe, but largely ignored. She highlighted the presence of thousands of stateless children in Niger and Chad, who are particularly vulnerable. Prof. Alidou also emphasized the importance of current efforts to extend access to education among girls and women, which will enable them to build the skills to participate in post-conflict democratic governance.

Speaking on the activities of Boko Haram in Nigeria, Dr. Olaniyan explained that although the Nigerian government claimed to have “technically defeated” Boko Haram in 2015, the armed extremist group has continued to carry out coordinated attacks, with thousands having been killed or displaced by the group since 2016. He noted that the group has altered its strategy and is no longer focused on holding territory. Many Boko Haram fighters, he added, have embedded themselves in communities in Northern Nigeria. While some locals do not report them to the security forces due to fear of reprisal, the militant group has gained sympathies among certain rural communities.

Prof. Tawfik’s presentation drew upon her APN-supported research on hydropolitics in North-East Africa. She explained that Ethiopia’s construction of the Grand Ethiopian Renaissance Dam (GERD) has shifted power dynamics between Egypt, Sudan, and Ethiopia, and led to increased tensions in the region. Her analysis also factored in the increasing involvement of new actors, including Gulf states and China, which has further complicated the issue. Dr. Tawfik argued that despite its various coercive and cooperative approaches to water issues, Egypt, which views the Nile as a critical national security issue, has been unable to generate sufficient interdependencies with its neighbors.

Prof. Gain spoke on the securitization of the Sahel region, suggesting that the G5 Sahel is being reduced to its military component instead of also focusing on democracy, human rights, and good governance to address the root causes of instability in the region. He also emphasized the structural barriers to effective cooperation between the various security actors, including reliance on foreign funding, lack of coordination in a crowded security terrain (Barkhane, MNJTF, MINUSMA), and the relative inactivity of Regional Economic Communities—such as ECOWAS, ECCAS, and AMU—with regard to transnational threats such as terrorism and organized crime.

Mr. Roussellier focused on the role of Morocco and Algeria in security and development in the Sahel. He noted that although both are concerned with security in the region, Algeria appears more prepared to focus on regional security, while Morocco looks to be more involved with economic development.

The final panel, moderated by Frederic Wehrey, a senior fellow at CEIP, addressed “Libya’s Impact on Sahel-Maghreb Security.” According to Lydia Sizer, an independent researcher who video-conferenced in from the UK, the most persistent challenge in Libya is creating new and legitimate institutions in the context of a durable and robust war economy. Karim Mezran, a senior fellow at the Atlantic Council, stressed that any solution to the Libyan crisis must harmonize top-down and local level initiatives to keep the country intact. Manal Taha of the United States Institute of Peace called on Libyan authorities to implement reforms to increase inclusivity and improve the prospects for reconciliation.

As a whole, the panels depicted a complex region under considerable strain, caused in large part by poor economic management and weak political institutions. All presenters agreed on the need for better-informed policy to address the root causes of violent conflict in the region. The conference provided an opportunity for a diverse array scholars and practitioners to engage the public and dialogue with one another on the critical links between security and governance.