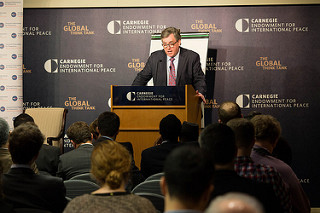 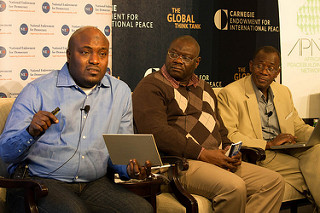 The African Peacebuilding Network (APN), in collaboration with the Carnegie Endowment for International Peace (CEIP) and the National Endowment for Democracy (NED), held a one-day conference on “Militancy, Border Security, and Democracy in North Africa and the Sahel.” The event, held February 24th, 2016, in Washington DC, brought together scholars, policymakers, practitioners, diplomats, and reporters from Africa, the Middle East, and the United States to engage in discussions examining security and governance challenges in the Maghreb-Sahel, especially those concentrated along national boundaries. Special emphasis was placed on Algeria, Libya, Mali, Mauritania, Nigeria, and Tunisia.

The conference consisted of several panels focusing on the permeability of borders, economic marginalization, and political vacuums in the hinterlands of North African states, with special emphasis on Algeria, Libya, Mali, Mauritania, Nigeria, and Tunisia. These challenges were seen as being responsible for transforming border communities into epicenters of identity-driven politics, militancy, violent conflict, and organized transnational crime. Attention was paid to security forces operating against militant insurgencies in peripheral regions and transnational jihadist militancy, both of which have penetrated the Sahara and threatened state borders. Challenges also include the issue of smuggling and illicit economic activities, as well as continued social and political discontent. The issue of corruption was also discussed, as were the risks that countries, such as Mauritania, remain exposed due to insurgency and violence, including the spread of jihadist ideologues at an astonishing rate.

Audience members represented a wide range of universities and international offices, as well as regional organizations and institutions, including:

The keynote address was given by John Desrocher, U.S. Deputy Assistant Secretary of State for Egypt and Maghreb Affairs. He spoke about the fluidity of security threats in the region and the drain on resources in the Sahel, as well as increased economic competitiveness and trade that allow groups to exploit vulnerable populations. Desrocher also gave a broad overview of the US State Department’s work in stabilizing the security situation in northern Mali and Libya. He stressed the need for political accords, the advancement of institutions and development goals, democratic transitions, and unity governments.

Calls were also made by panelists to produce holistic, long-term approaches to effectively tackle cross-border violence by extremist groups affiliated with, or pledging allegiance to, transnational Islamist terrorist organizations. There was expressed need for mutual cooperation between northern and West African states and the donor community, as well as partnership between state leaders. One panelist urged state leaders to work with traditional and religious elites in order to secure spaces and humanize security. Emphasis was also placed on creating strategies to incentivize education and help bolster the economic, political, and social landscape in the region.

By the end, participants called for more action to deradicalize populations and connect the state with the citizenry in the Sahel and Mahgreb regions. As Dr. Ukeje said, “The state is still alive; it might not be well, but the connection to the citizenry must be there.” Panelists felt the need for more robust understanding of how these current problems have festered and developed over the long-term. It was agreed that researchers must interact more with policymakers and practitioners in order to make better-informed decisions and policy actions.

Full video footage of the event is available for viewing here.