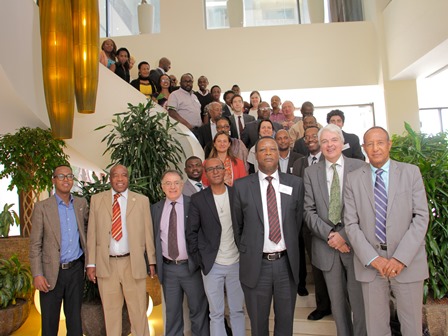 Wilton Park, with the support of Carnegie Corporation of New York (CCNY) and in partnership with the African Peacebuilding Network (APN) and African Leadership Centre (ALC), held a conference on “Peacebuilding in Africa: Developing African Approaches.” The event, which took place March 14–16, 2016, in Addis Ababa, Ethiopia, served as a follow up to the previous Wilton Park event on “Peacebuilding in Africa: Evolving Challenges, Responses, and New Thinking,” held February 2015.

This second conference brought together scholars, researchers, policy analysts, and practitioners in the field of African peacebuilding to engage in a series of high-level dialogues with the intention of providing a forum for African perspectives toward policy development. It provided an opportunity for organizers to make visible the outcomes of discussions, debates, and findings from the first conference held at Wilton Park, as well as consolidate strategies and underscore new African thinking on peacebuilding.

Panelists spoke to the challenges of preventing conflict relapse and ensuring sustainable peace, as well as the regional, political, social, and economic drivers affecting peacebuilding initiatives at the local, national, and regional levels. Emphasis was placed on bridging the gap between state leaders and citizens, promoting local ownership, regional responses and mutual cooperation, and producing tangible outcomes. Also pertinent to the discussions was the challenges of funding and the mobilization of resources needed for peacebuilding. Discussions also focused on the shifting and complicated conflict and security landscape in Africa, unconventional warfare and terror attacks by groups such as Boko Haram and Al-Shabaab, transnational dimensions of peacebuilding and conflict, and the role of women in peace processes.

Participants cited the importance of engaging local actors and having policymakers work more closely with nongovernmental organizations and civil society organizations. To that end, it was also concluded that peacebuilding must go hand in hand with solid political processes involving all stakeholders. It was noted that actors must stop resorting to the path of least resistance and engage openly and honestly with present challenges, reflect upon histories of conflict, and engage with “the real custodians of peace,” that is, the citizens of conflict-affected countries.

Reflecting on the issue of Islamic fundamentalism and terrorist groups, participants were urged to consider radicalization as a process, not an occurrence. Some suggested too that actors should start seeing peacebuilding through the lens of development, and that the range of activities under peacebuilding is within the purview of the state. Thus, institutions such as the AU, while they may be able to set agendas for peace, should leave the implementation of peacebuilding practices in the hands of the state. Calls were also made for the private sector in Africa to realize it is both a partner and beneficiary of peacebuilding, and leaders on the continent were encouraged to look for, and work towards, shared values and mutual cooperation.

Finally, participants concluded that more needs to be done in terms of research and information-gathering, as well as sharing that knowledge with policymakers at the national, regional, and continental levels in order to positively impact peacebuilding policy and practice. The closing session had participants questioning the role of technology in supporting peacebuilding efforts, reflecting on the renegotiation of state–society relations, and exploring the roles citizens can play in demanding a more genuine political will to promote peace from their leaders.

Furthermore, discussions touched on options to further these enriching discussions and document and disseminate findings, including an edited book project. In the closing plenary, the lead speakers and participants agreed on the need for further dialogue to provide deeper insights into some of the emerging issues and challenges that had emerged over two days of robust debates. There was also the view of strengthening the connections between African thinking and peacebuilding policies and practices on the continent.

Be sure to check out Wilton Park's podcast with President Pierre Buyoya here.

A recap of this event is also available here.