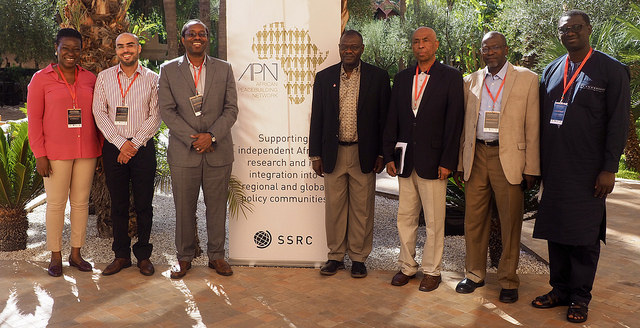 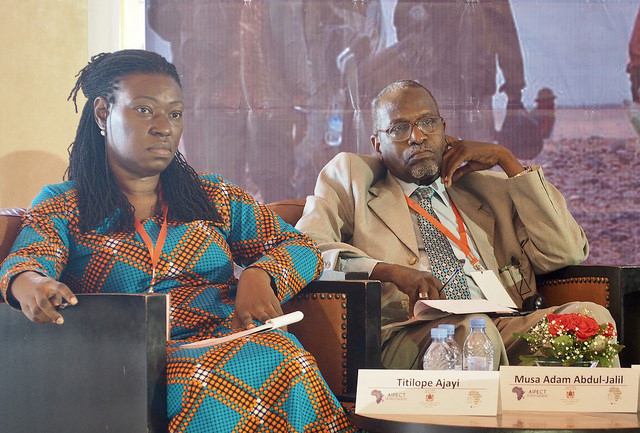 The African Peacebuilding (APN) of the Social Science Research Council (SSRC), in collaboration with the African Institute for Peacebuilding and Conflict Transformation (AIPECT), and Morocco’s Ministry in Charge of Civil Society and Relations with Parliament, held a two-day “High-Level Policy Dialogue on Migration, Peace, and Security in North Africa and the Sahel” in Marrakech, Morocco. The event was part of a series of joint activities leading up to the United Nations 2018 International Migration Conference, set to take place on December 10-11, 2018.

Participants in the policy dialogue included senior government officials and politicians; academics and researchers; development practitioners; and representatives from the United Nations, African Union, and African Regional Economic Communities. Fourteen countries were represented in total. Among the topics covered were contexts, drivers, and impacts of migration; the links between migration, peace, and security; roles of national, regional, and transnational actors; and renegotiating international cooperation frameworks.

The guest of honor at the opening session was Hon. Mustapha El Khalfi, the minister in charge of relations with parliament and civil society and a government spokesman. In his opening remarks, Hon. El Khalfi spoke about the need to examine the evolving challenges related to peace and security and to determine why the policies of the last two decades failed to prevent and resolve these issues. He added that Morocco had been the first country to have a comprehensive national strategy for migration, which has led to the registration and legalization of tens of thousands of migrants and provided basic rights including access to housing and jobs.

APN Program Director Cyril Obi highlighted Morocco's crucial role in global migration policy as a gateway to two continents, noting that migration, peace, and security are closely interrelated issues. Dr. Obi put the policy dialogue in the context of Morocco's return to the African Union and the upcoming conference on migration in December.

Welcoming the participants to Morocco, AIPECT President Mohammed Gain highlighted some of the major challenges facing North Africa and the Sahel, including terrorism, failed states, organized crime, and various humanitarian crises. He stressed that the situation requires a new approach that shifts the emphasis from humanitarian and security measures toward conflict prevention and peacebuilding.

The first plenary session was chaired by Victor Adetula, head of research at the Nordic Africa Institute (NAI). Ana Fonseca, the International Organization for Migration (IOM) chief of mission in Morocco, spoke on the contexts and potential drivers of migration in North Africa and the Sahel, emphasizing the need to collect reliable data on refugee movement patterns in order to respond more effectively. APN alumnus Ibrahim Bangura (IRG 2016) offered insights on young people and illegal migration in Africa. He described the frustrations facing many African youths—including lack of jobs, limited educational opportunities, and political marginalization— which drive them to take a great risk by crossing the Sahara Desert and the Mediterranean Sea in search of better opportunities in Europe.

Jean-Paul Cavalieri, United Nations High Commissioner for Refugees (UNHCR) representative in Morocco, discussed the security aspects of refugee movements to Morocco, highlighting the legal gaps in how practitioners and policymakers think about resettling refugees. As for how to integrate migrants to Europe, Maurice Crul, chair of the International Migration, Integration and Social Cohesion (IMISCOE) network, called for the development of holistic policies as the most effective strategy for host countries. These measures should ensure basic rights, access to educational opportunities, and participation in the labor market for migrants.

The second plenary session was chaired by Charlotte Brandsma, a senior policy analyst at the German Marshall Fund. Phinith Chanthalangsy, a program specialist at the United Nations Educational, Scientific, and Cultural Organization (UNESCO) Office for the Maghreb, called on policymakers to resist treating people as "state-defined." He lamented the failure of rich countries to ratify the more comprehensive treaties protecting migrant rights and argued that it was not possible to affirm fundamental human rights and freedoms without recognizing the dignity of migrants and translating these into laws and policies.

APN grantee Titilope Ajayi (IRG 2018; Next Gen Africa 2017) used the case of the drowning deaths of twenty-six young Nigerian women migrants to illustrate the changing demographics of migration— younger women are increasingly making the journey across the Mediterranean—as well as the gendered nature of migration patterns, which includes the threat of trafficking for sexual exploitation. Ajayi also called for better mechanisms for evaluating the effectiveness and impact of humanitarian NGOs working in Nigeria.

In his presentation, APN alumnus Musa Adam Abdul-Jalil (IRG 2015) spoke on his research on the trends, causes, and consequences of migration of youth from Darfur, Sudan to Europe. Among the reasons migrants give for leaving are displacement, discrimination, and limited freedom of movement, all of which contribute to crippling poverty. Abdul-Jalil explained that more migrants are seeking passage to Europe because of increased frustration, the search for better opportunities, and misinformation about conditions of life abroad. Zakaria Ousman Ramadane, president of the Chadian Center for Strategic Studies, explored the shared security challenges facing the G5 Sahel countries. Ramadane described how, due to low state capacity and poor governance, large parts of many Sahelian countries have been overtaken by traffickers and other criminal groups, with some assuming the functions of the state.

The third plenary session—on the roles of national, regional, and transnational actors—was moderated by APN Advisory Board Chair Ismail Rashid. The first speaker, Karim Saafi, co-chair of the African Diaspora Youth Forum in Europe (ADYFE), emphasized the need for promoting entrepreneurship, employability, and civic engagement for African youth living in Europe. Vincenzo Camporini of Istituto Affari Internazionali (Italy) spoke on EU-Africa cooperation on migration and security, which he said must be guided by the principle that there are “no military solutions to political problems.” Boubacar N'Diaye, a professor at The College of Wooster, explained how the collapse of Libya is destabilizing the region and contributing to the migrant crisis. He faulted Europe for failing to rebuild Libya and subsequently relying on harmful migration policies to restrict access to African migrants. The final presenter, Redie Bereketeab, a senior researcher at the Nordic Africa Institute, delivered a presentation titled "Horn Africans in the Maghreb: From African Solidarity to EU-Maghreb Bargaining Chip," in which he explained religious, economic, and cultural attractions of the Maghreb for migrants from the Horn of Africa.

Speaking during the final plenary session, APN grantee Mohammed Masbah (IRG 2018) examined the limits of the Countering Violent Extremism (CVE) approach, which he said has failed to address the root causes of violent extremism by overemphasizing the security dimension. Masbah noted that in Morocco, for example, the security agencies have been the dominant actors in CVE strategy to the exclusion of civil society actors and other sectors. Victor Adetula followed by addressing the role of the international community in promoting peace and security in the region. He challenged policymakers to expand their conception of the “international community” to one that views actors from outside the EU and US as having agency. He also criticized the narrative of state failure which he claimed is driving the West's emphasis on the stabilization approach to conflict in Africa.

Senior policy analyst at the German Marshall Fund, Charlotte Brandsma, spoke on the growing calls by NATO’s partners in the Middle East and North Africa region to renegotiate their relationship with NATO. She spoke to NATO’s main goals in the region as including fostering security cooperation and a shared strategic outlook with partners and maintaining its capacity for surveillance and intervention in the region when threats arise. In the final presentation of the conference, Sarra Hanafi of Manouba University (Tunisia) pointed to the gap between the various multilateral frameworks and bilateral agreements on migration management and their effective implementation, which she attributed to inefficient policy instruments.

The closing session—moderated by Cyril Obi, Ismail Rashid, and Mohammed Gain—provided participants with the opportunity to convey their key takeaways from the policy dialogue and propose inputs into the outcome document from the policy dialogue. Among the suggestions proffered were that African regional organizations must play a greater role in addressing migration and its root causes. As the European Union has done, African countries were also advised to work to devise a common strategy to address migration, by recognizing the rights of migrants in transit and receiving countries, while also addressing push factors in countries of origin. Participants also agreed that there is a need for further research on the links between migration, peace, and security to better inform policy. It was also proposed that more should be done to improve the prospects for African youth, who make up the majority of migrants. Some called for African countries to look inward to review and improve their own domestic policies to ensure they recognize the rights and dignity of migrants, which research has shown can benefit their economies.

There was a consensus that more forums are needed to continue and deepen the engagement between the scholar-practitioner community and policymakers. The conference organizers indicated that an outcome document from the workshop, including a list of fifteen recommendations, will hopefully feed into discussions during the Intergovernmental Conference to Adopt the Global Compact for Safe, Orderly, and Regular Migration in December. Participants were also informed that two policy briefs, and a book that collates the insights shared on the various panels will be published by AIPECT.


Photos from this event can be viewed on the APN’s Flickr page.