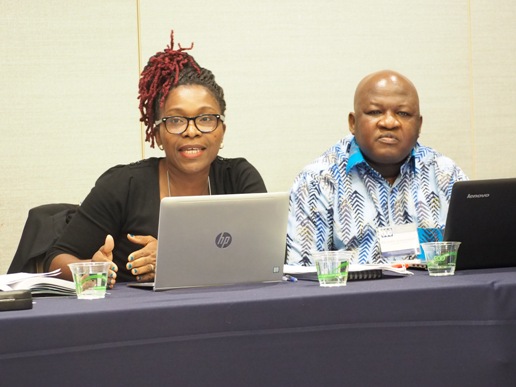 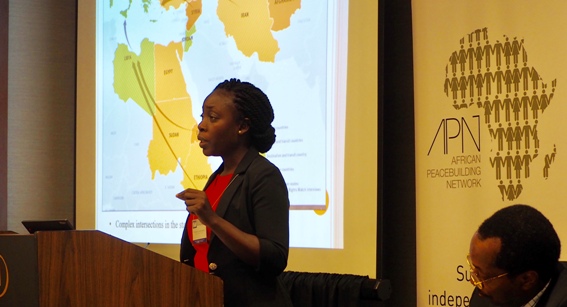 The African Peacebuilding Network (APN) of the Social Science Research Council (SSRC) participated in the 59th Annual Convention of the International Studies Association (ISA) in San Francisco, CA on April 3-7, 2018. This year’s Annual Convention theme was “Power of Rules and Rule of Power.”

On Wednesday, April 4, APN alumnus Amanda Coffie (IRG 2016), a research fellow at the Legon Centre for International Affairs and Diplomacy (LECIAD) at the University of Ghana, addressed the ISA-Global South Caucus Dialogue on the subject of increasing representation of scholars based in the Global South in journal publications. She discussed differences in research methodologies, language, as well psychological barriers that lead to the inequality in publication opportunities.

Dr. Peace Medie, an APN alumnus (IRG 2015; Book Manuscript Completion Grant 2016) and Research Fellow LECIAD, co-chaired a roundtable on “Challenging Boundaries in the Study of Africa and International Relations,” which took a critical lens to the study and practice of international relations in the West, in particular, how Africa and Africans are represented. She also chaired a panel on "Integrating Global South Scholars into Mainstream International Studies: Strategies, Opportunities, and Obstacles," which featured Dr. Amanda Coffie and Prof. Navnita Behera of Dehli University, India. Dr. Medie discussed her recent research on regional (north-south) disparities in publishing on gender and politics. She recommended that journals and scholars in the Global North should actively encourage submissions from the Global South, adopt editorial visions which emphasize inclusion, appoint Global South scholars to editorial boards, and increase cross-regional collaboration. Dr. Coffie’s presentation highlighted the challenge of getting past "gatekeepers" who privilege certain forms of knowledge, and emphasized the importance of integrating perspectives from the Global South. She also proposed increasing the number of reviewers from the Global South as a way of developing an appreciation for different types of knowledge and modes of presentation.

On Friday, April 6, APN Program Director Dr. Cyril Obi and Dr. Coffie co-chaired a special roundtable convened by the APN on “Africa and the Global Refugee Crisis: Traversing the Terrain Between Global Power and a Continent’s Capacity to Respond.” The roundtable examined Africa’s unique position in the context of the global refugee crisis. Dr. Obi opened the proceedings with a brief discussion of the SSRC’s history of support for emerging scholars across the globe. He framed the conversation by noting that the current crisis is more broadly about mobility and that any analysis should factor in migrants and those who have been displaced. Dr. Obi added that despite the popular narrative, Africa actually hosts more refugees than it sends and that host-countries such as Ethiopia, Kenya, Uganda, and Tanzania have struggled to cope with very limited resources.

APN alumnus Dr. Patience Adzande (IRG 2017), a lecturer at Benue State University, Nigeria, emphasized the need to pay more attention to the dynamics of the refugee crisis within Africa and take into account the changing trends. Her presentation included a significant amount of data on host and source countries in Africa, revealing not only the scale of the crisis, but also the variation across regions and constant evolution. With children making up a third of the global refugee population, Dr. Adzande noted that the refugee crisis is also a children's crisis. In closing, Dr. Adzande added that with respect to the refugee crisis, “when it is everyone's responsibility it becomes no one's responsibility.” She noted that States, the AU, UN, ECOWAS, EU, and other regional organizations all need to play their respective roles.

APN alumnus Richard Alemdjrodo (IRG 2015) of the University of Lome, Togo, addressed the legal aspect of the refugee crisis in his presentation. He explained that Africa's legal frameworks and instruments, such as the OAU Convention and the Kampala Convention, differ from global conventions in that they have expanded the definition of the term "refugee" and paved the way for "prima facie" group refugee status determination, which allows for a more expansive notion of who is considered deserving of protection. Dr. Alemdjrodo noted that this has led to expanded protections for IDPs (such as the Kampala Convention which protects against arbitrary displacement), economic migrants, and those fleeing conflict. These conventions, he added, go beyond the scope of other international conventions and can serve as an example for international policies on refugees moving forward.

Dr. Coffie’s presentation focused on refugees, forced migration, asylum, and their relation to post-conflict peacebuilding. She emphasized the importance of not looking at the refugee crisis solely from Euro-centric or Western perspectives. Dr. Coffie went on to critique current international policy approaches to the global refugee crisis, beginning with the 2016 New York Declaration for Refugees and Migrants, which outlined a shared international responsibility for refugees and migrants, and was to lead to a more equitable and predictable response to the refugee crisis. She pointed out potential weaknesses in the forthcoming global compact for migration, which she felt would likely not succeed due to, inadequate attention to third country resettlement, the lack of US support, and ignoring the question of Internally Displaced Persons (IDPs).

Jocelyn Perry, a Fulbright Public Policy Fellow in Malawi and former APN staff member, served as a discussant on the APN roundtable. She reiterated the need for more representative discussions on future global agreements on refugees and migrants, adding that the global compact for migration needs to be flexible and dynamic in order to distribute responsibilities more equitably.

APN alumnus Dr. Laurie Nathan (IRG 2013) of the Kroc Institute for International Peace Studies at the University of Notre Dame presented his research on “Mediation Mandates: A Typology and Causal Model,” on a panel on “Civil War Resolution Processes.” He made note of the dearth of scholarly literature exploring the impact and effectiveness of the various types of mediation mandates, with most research focusing on peacekeeping, which is considered easier to assess. Dr. Nathan also served as a discussant on a panel on “Investigating Peace Bargaining: The Empirical Exploration of Peace Agreements.”

APN Advisory Board Member Prof. Rita Abrahamsen spoke on the "Contending Visions of World Order in Pan-Africanism" on a panel titled “After Unipolarity: Visions of World Order in the 21st Century.” She observed that although Africa does not feature prominently in conversations about world order and is often seen as lacking ideas and interests of its own, the Pan-African ideology has contributed to the current world order.

Prof. Abrahamsen also participated in a special panel based on a Security Dialogue special issue on “Militarism and Security: Possibilities, Dialogue, and Limits,” where she discussed her article, “Return of the generals? Global militarism in Africa from the Cold War to the present,” in which she argued that global militarism in contemporary Africa is dependent on the logic of security and securitization. In addition to chairing a panel on “Rules, Power, and Private Military and Security Companies,” Prof. Abrahamsen also served as a discussant on another panel on “Disorder and Uncertainty Rule: Governance in a Time of Chaos and Contingency,” which featured presentations on post-war Cote d'Ivoire and Uganda.

Former APN Advisory Board Member Devon Curtis of Cambridge University served as a discussant on a panel on "Rethinking Inclusion in Peace and Transition Processes: Diversity and Power." She also participated in a roundtable on “Underrepresented Groups in International Peace and Conflict Studies and Practice: Where Are We Now, Why Does It Matter, and What Are the Next Steps?” Dr. Curtis proposed that the field’s slow progress on diversity is due in part to discrimination, the intellectual dominance of certain types of knowledge, and prescribed publishing expectations.