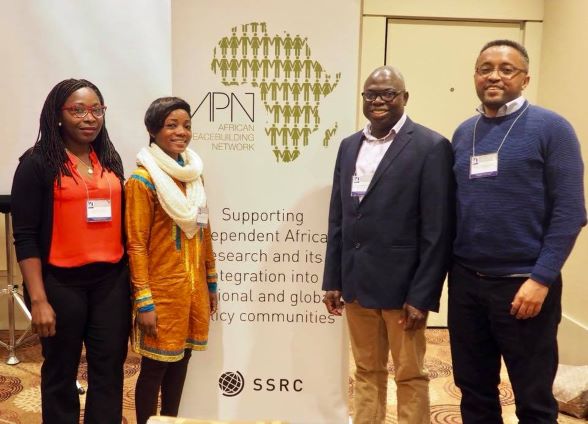 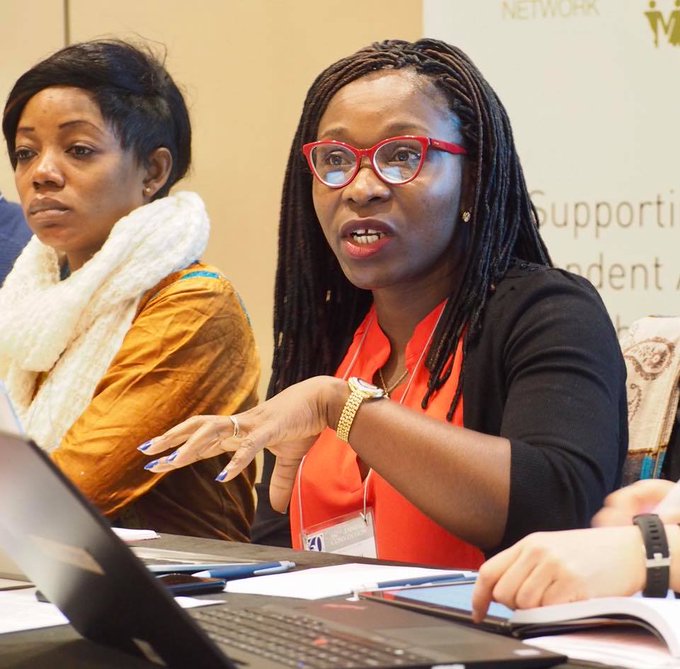 The African Peacebuilding Network (APN) of the Social Science Research Council (SSRC) participated in the 60th Annual Convention of the International Studies Association (ISA) in Toronto, Canada (March 27-31, 2019). The APN convened a special panel on “Re-visioning Peacebuilding as an IR Framework” chaired by former APN Advisory board member and Associate Professor at the University of Western Ontario, Kings College, Thomas Tieku. Held on Friday March 29, the panel also featured presentations by three APN alumni: Amanda Coffie  (IRG 2016), a research fellow at Legon Center for International Affairs and Diplomacy (LECIAD) at the University of Ghana; Amina Djoulde Christelle (IRG 2018), a senior lecturer at the University of Ngaoundere, Cameroon; and Fana Gebresenbet Erda (IRG 2018), an assistant professor at the Institute for Peace and Security Studies (IPSS) at Addis Ababa University, Ethiopia.  Miwa Hirono, an associate professor at the College of International Relations at Ritsumeikan University, Japan, also made a presentation on “China’s International Responsibility from Insider Perspectives: The Case of Southern Sudan.” The presentations by all the APN alumni were based on findings from their APN-supported projects and the impact of the program on their research.

In her paper titled “The African Peacebuilding Network’s Approach to Shaping Peacebuilding Debates,” APN alumnus Amanda Coffie spoke to the evolution and impact of the APN program and the number of grantees supported since the inception of the program within the context of its impact on the discourse of peacebuilding. Among other issues, she emphasized how the APN’s focus on and support for early career scholars located in Africa though various activities including grants, mentorship, and opportunities to disseminate their research was contributing to the emergence of globally visible African voices on peacebuilding. Zeroing in on some of the conceptually innovative work by some APN alumni on the “local turn” in peacebuilding on the continent, Amanda made a rather compelling case for further theorization and recognition of an emerging African Peacebuilding Network (APN) perspective to peacebuilding.

In his paper titled “State Intervention and Conflict in Pastoral Areas: Local Elite as Brokers for Peacebuilding,” Fana Gebresenbet drew from a case study of government-led development projects in the southern Omo Valley in Ethiopia, including large-scale sugar production, road construction, hydro-electric dams, and villagization. His findings, based on APN-supported fieldwork, showed that despite the goal of these projects to promote peacebuilding, they were contributing to increased forms of violence and insecurity. He used examples such as increased vehicular traffic leading to several car accidents that have injured people and cattle, tensions between locals and “outsiders,” and land-related conflict. In concluding, he argued that local communities have viewed these projects as deliberate actions by the government to eliminate local communities and gain access to their lands. His presentation also focused on giving space to local political processes to function, including recognizing the role of some local actors as peace agents. Fana also made some suggestions on how to address suspicions by local people, such as including those who are relatively well educated and respected in local communities as representatives when negotiating development projects with the Ethiopian government to ensure that such interventions do not give rise to distrust and conflict.

In her presentation titled “An African Tree of Peace: Sore and Peacebuilding in Cameroon and Central African Republic (CAR),” Amina Djoulde Christelle drew upon her APN-supported ethnographic fieldwork and research on Oko’o Nga’a Mo (Women of Peace) in Cameroon and the Central African Republic (CAR). She empirically demonstrated how indigenous women’s rituals of peacebuilding helped to foster harmony and peaceful coexistence in some parts of Africa. Her innovative work exemplified a “local turn” in African peacebuilding scholarship, bringing to the fore a new and gendered approach to conflict and conflict transformation. In concluding, she made a compelling case, based on her findings, for the greater inclusion of perspectives from such local/endogenous practices into mainstream strategies for building peace in Africa.

In her presentation titled “China’s International Responsibility from Insider Perspectives: The Case of South Sudan,” Miwa Hirono presented the results of her research collected through case studies analyzing local perspectives on China’s role in conflict-affected regions. She spoke on case studies conducted in Myanmar, Liberia, and South Sudan. Although unable to visit South Sudan due to security concerns, Miwa was able to collect useful information based on interviews with South Sudanese people living in Nairobi, Kenya.

The presentations were followed by a lively question-and-answer session during which members of the panel engaged the audience in robust discussions and debates. It is expected that the very useful questions and comments from participants will be integrated into their work as they prepare their research findings for publication and dissemination to a wider audience. APN alumni also participated in other panels and activities at the ISA meeting and spoke glowingly about the importance of such engagements to the advancement of their careers.