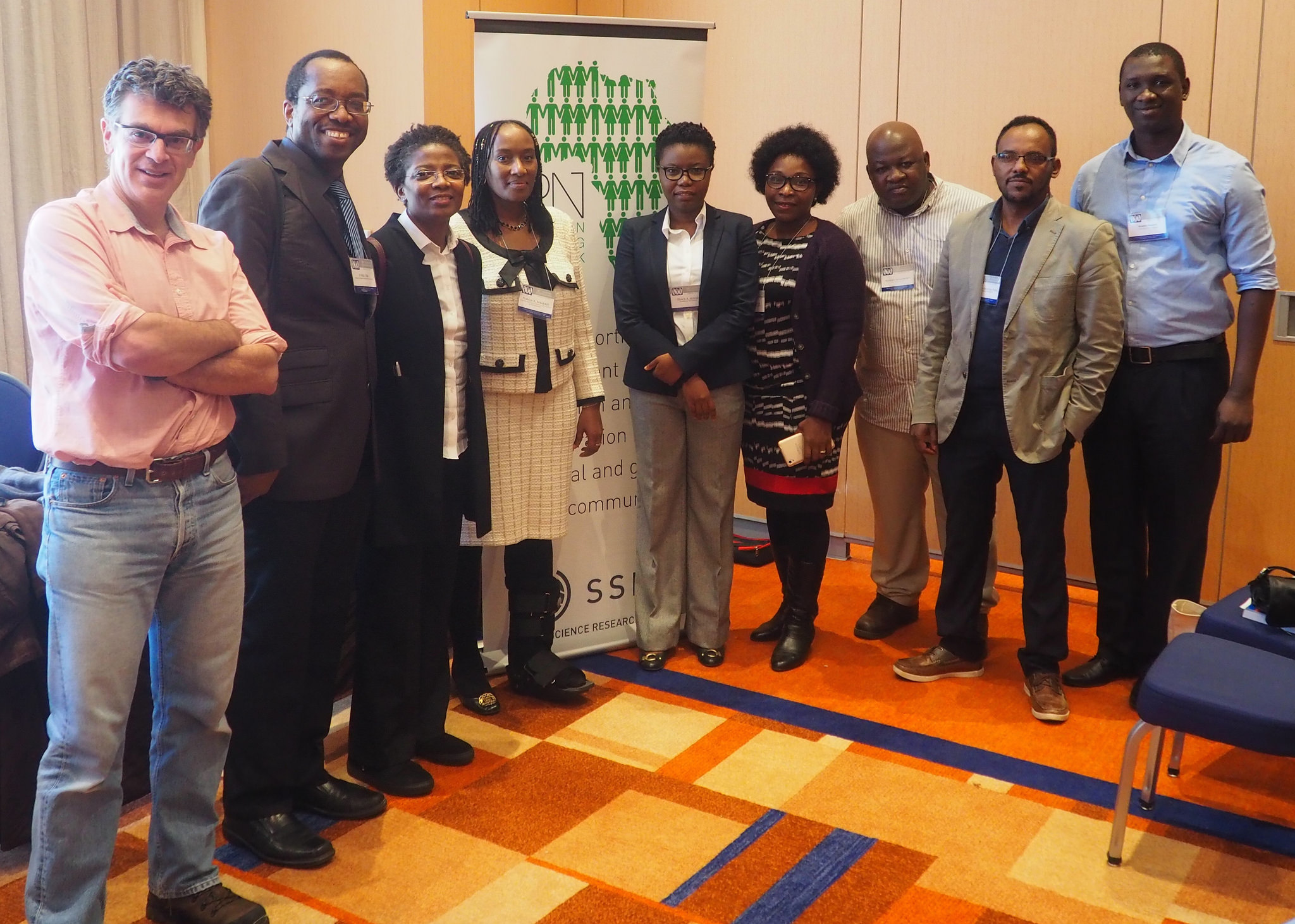 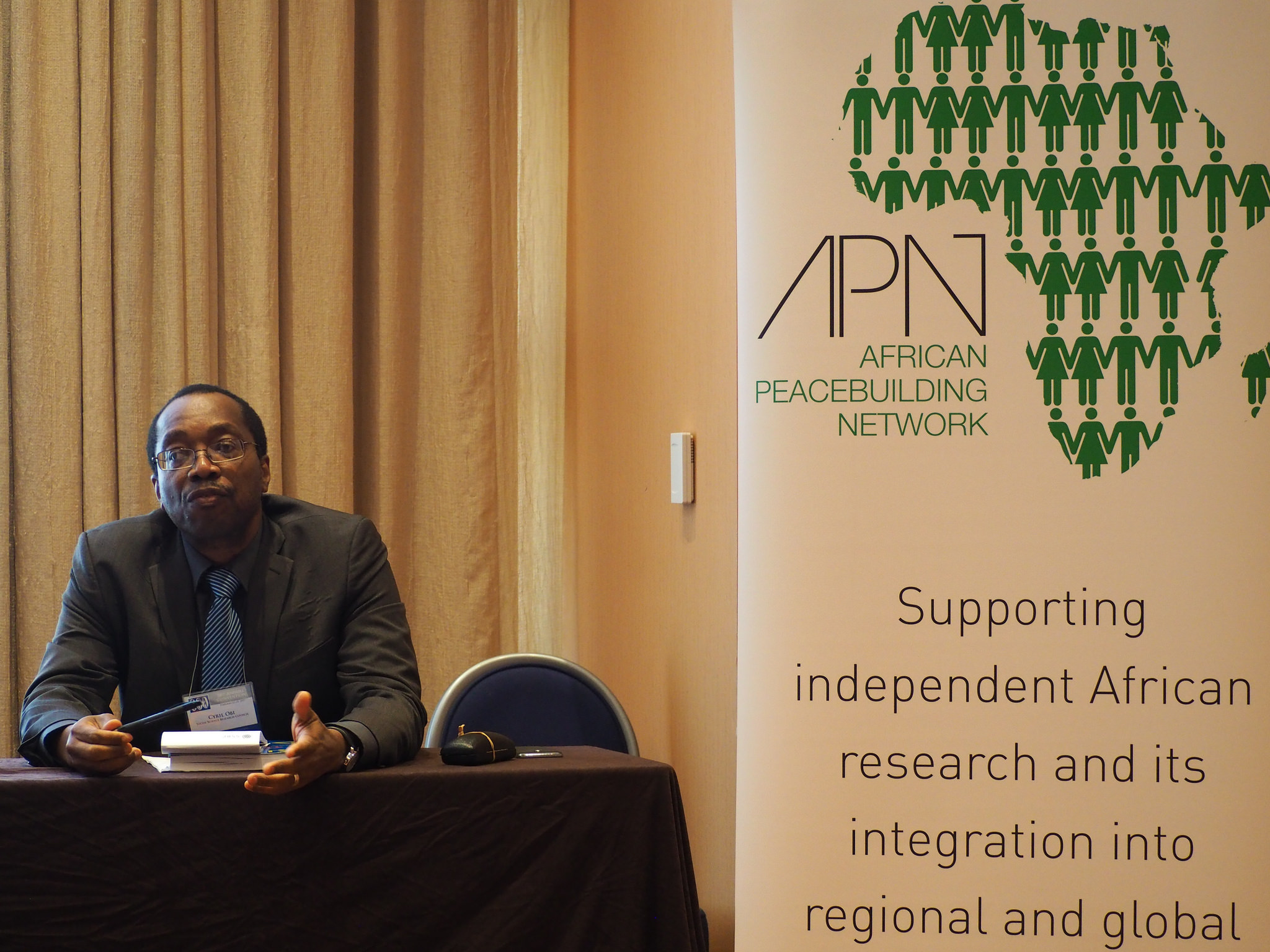 The African Peacebuilding Network (APN) of the Social Science Research Council (SSRC) participated in the 58th Annual Convention of the International Studies Association (ISA) in Baltimore, MD on February 23-24, 2017. This year’s Annual Convention theme was “Understanding Change in World Politics.”

On Thursday, February 23rd, APN program director Dr. Cyril Obi and APN Advisory Board member Prof. Pamela Mbabazi co-chaired a panel on “The Changing Dynamics of Conflict and Peace in Africa.” The panel discussed new trends in conflict in Africa, particularly since the end of the Cold War and accompanying change in global power dynamics and Africa’s “strategic” importance. Dr. Obi and Prof. Mbabazi highlighted the recent increase in intra-state and transboundary conflicts, as well as the normative evolution occurring at the local, national, and international levels to address these new patterns of conflict, such as the emergence of hybrid peacekeeping operations. Dr. Peace Medie—an APN Alumnus (Individual Research Grant 2015; Book Manuscript Completion Grant 2016), Research Fellow in the Legon Centre for International Affairs and Diplomacy (LECIAD) at the University of Ghana, and Postdoctoral Research Fellow at Princeton University’s Woodrow Wilson School of Public and International Affairs—presented her paper on “Violence against Women and Access to Justice in Liberia.” She focused on findings from her APN-supported research in Liberia and Côte d’Ivoire on the role of civil society, particularly women’s organizations, in pressuring law enforcement to enforce laws against rape and domestic violence. Dr. Kennedy Mkutu, Associate Professor of International Relations at the United States International University-Africa, presented his research on increasing conflict over resource-rich regions, particularly borderlands, with a focus on “ungoverned spaces” and his field work in the oil-rich region of Turkana in north-west Kenya. The panel ended with Dr. Obi posing the question to the researchers and audience as to whether peacebuilding mechanisms and peace initiatives are keeping up with the changing realities of conflict today?

Dr. Medie also presented a paper titled “Global Norms and Local Action: The Campaigns to End Violence against Women in Africa” for a panel on “Norm Diffusion” on Thursday afternoon. Additionally, Dr. Mbabazi participated in a panel titled “Centres, Peripheries, Interstices: Understanding a World of Change through the Scholarship of Timothy Shaw I.”

On Friday, Dr. Obi presented his paper on the “African Union and the Search for Peace in Africa” for a panel on “Security Governance and Institutional Changes in Africa.” In the paper, he grappled with the African Union’s quest to deepen and institutionalize sustainable peace in Africa, particularly whether peace is considered a principal component of the AU’s project and if a single AU perspective on peace even exists. If so, what influences this perspective and does it engage with the African reality? Moreover, Dr. Obi highlighted the twinning of negative peace and state security in the discourse around peacekeeping and peacebuilding in Africa, and how this has reinforced the dominance of the nation-state by preserving the status quo inherited at independence. He argued that this perspective may not be adequate in the formation of a transformative peace agenda, which must move beyond a war-peace binary to engage with structural violence, problems with the social order, exploitation, exclusion, and injustice.

Dr. Obi also served as a discussant for a panel on “Explaining the Transformation of African Peace and Security Landscape,” on which three APN Individual Research Grant Alumni presented the findings of their APN-supported research projects.

Dr. Amanda Coffie (2016, Ghana) presented her research on “Changing the Peace-building Landscape from the Outside,” which addressed the role of refugees who have resettled abroad in the peacebuilding process through a study on an intervention by resettled Liberian refugees in Canada. Her research intended to address a gap in the literature on the role played by resettled refugees in the Global North on peacebuilding negotiations. External actors—such as governments in the Global North—often lead peace negotiations, but they remain “outsiders” and their involvement thus entails a degree of paternalism. The role of resettled refugees in countries in the Global North blurs the line between internal and external actors, offering them a unique position to influence the outside negotiations while still possessing insider knowledge. Dr. Coffie referred to these individuals as hybrid peacebuilding actors, who may contribute a great deal to the peacebuilding process. However, she argued that peacebuilding structures are too institutionalized and focus too much on elite asylum seekers to utilize these resettled refugees as beneficial actors, presenting a missed opportunity for improved peacebuilding practices.

Prof. Richard Alemdjrodo (2016, Togo) then presented his research on “UN Security Council-Regional Organization Relations: Did ECOWAS Intervention in Liberia and Sierra Leone Introduce a New Paradigm in International Law?” He has analyzed ECOWAS’s intervention in Liberia and Sierra Leone in the context of Chapter VIII of the UN Charter, which delimits the use of regional arrangements for addressing issues of peace and security. ECOWAS’s intervention was not authorized by the UN Security Council, which may present a contentious precedent, as the AU and UN do not necessarily have the same vision as to how conflicts are framed nor how they can best be resolved. Dr. Alemdjrodo argued that Chapter VIII should be revised to be more inclusive and to reflect the shifting reality of peacekeeping in Africa and globally. However, he cautioned that this proposal may also open Chapter VIII to less productive revisions and set a precedent for revising the UN Charter, which the UN is certainly hesitant to do.

Finally, Dr. Fekadu Adugna Tufa (2016, Ethiopia) presented his research on “Understanding Conflicts and Peace-building in the Context of Multiple Actors.” He analyzed Somalia’s relationship with Ethiopia, particularly through the context of conflict in the Somali Region of Ethiopia. Dr. Tufa argued that conflict in the Somali Region stems from multiple causes and actors that are socio-political, rather than solely being caused by environmental factors and clashes between clans. Through a case study of this region, he has shown that resource-based and ethnic-driven conflict only occur when these issues are politicized to the point of violent mobilization. In this instance, the conflict is caused by the entanglement of politics, clan identity, and territory, as well as the heightened intervention of the state in local political, legal, and economic affairs.

The ISA Annual Convention also provided a wonderful opportunity for APN Alumni from several years to reconnect and to meet with members of the APN program staff and the APN Advisory Board.

See more photos from the event on the APN's Flickr.