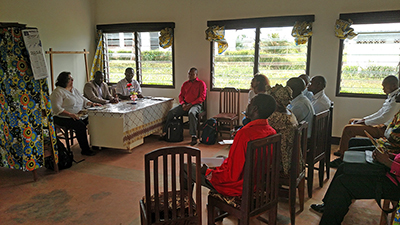 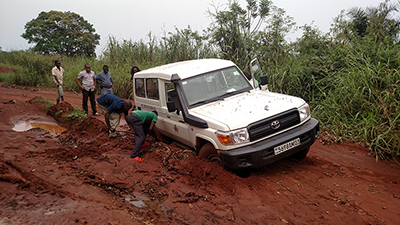 JSRP Research Director at the SSRC Tatiana Carayannis, Program Coordinator Aaron Pangburn, and Program Associate Mignonne Fowlis joined a team of their local researchers on a field visit to two of their western DRC research sites, Gemena and Gbadolite, in the northwest province of Equateur, for a series of interviews with government officials, civil society representatives, and customary leaders on issues of public authority. While near the border of the Central African Republic, the trip also served as an opportunity to visit the Inke refugee camp, home to approximately 13,000 Central African refugees, where the team initiated conversations on a new research project focusing on access to justice for displaced populations in the DRC.

This fieldwork was conducted under the auspices of two consortiums. The SSRC has been a lead partner in the DFID-funded Justice and Security Research Programme since 2011, which looks into issues of hybrid governance and public authority to find out what arrangements best benefit those at the receiving end of policies to support justice and security in conflict-affected states. The second and newest companion project to the JSRP, Accommodation of Justice for Displaced in DRC, began in October 2014 and is a research consortium composed of the SSRC, the University of Ghent, Cordaid, Wageningen University, and the Institut Supérieur de Développement Rural. It is funded by the WOTRO Science for Global Development, a division of the Netherlands Organisation for Scientific Research, and will investigate how displaced populations, both those internally displaced and refugees, access justice in the DRC. The SSRC manages the research in the western DRC, which includes Central African refugee camps and the communities surrounding them. The research trip was preceded by a WOTRO kickoff workshop and a JSRP planning workshop in Kinshasa 29–31 January 2015.