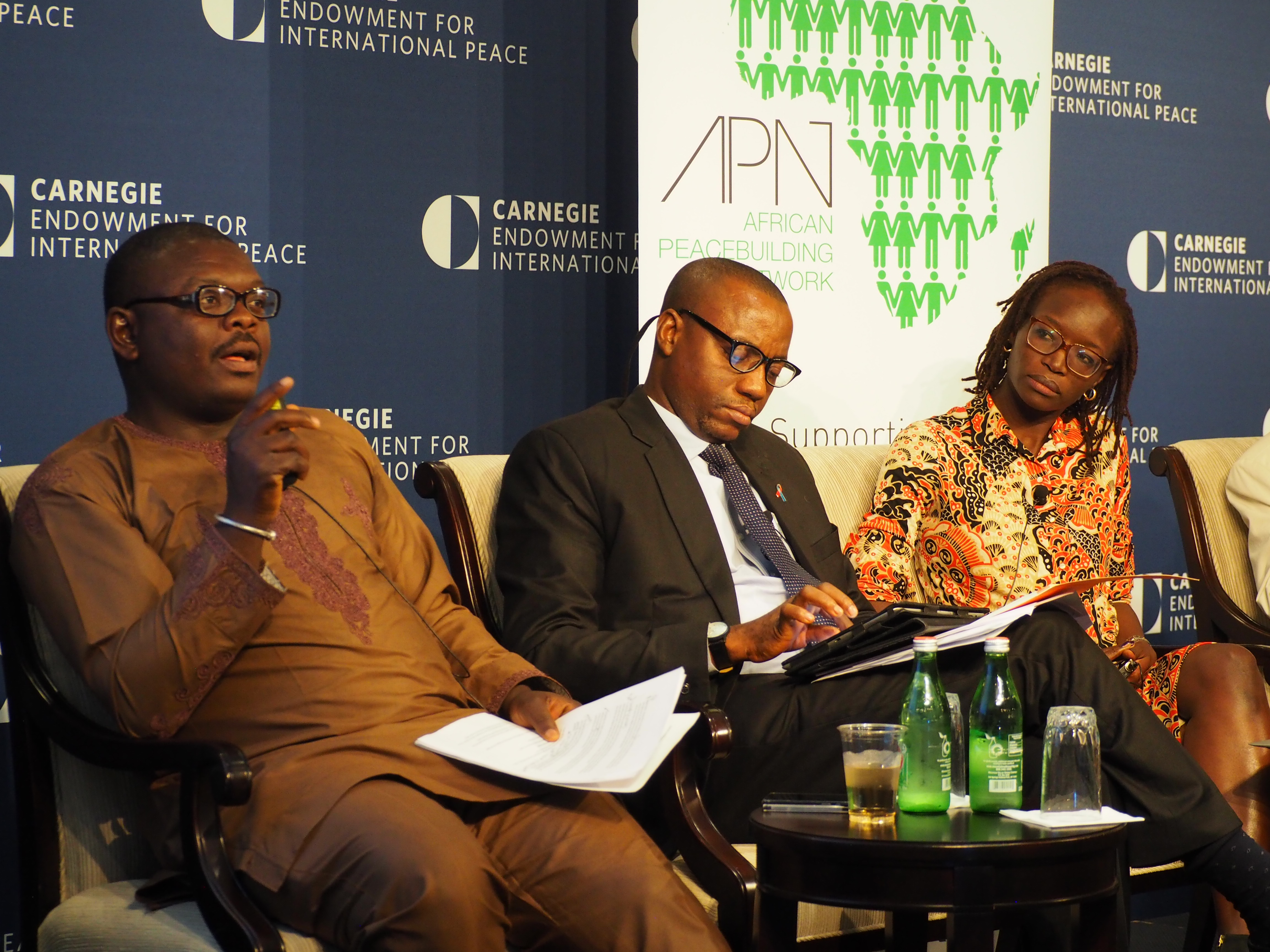 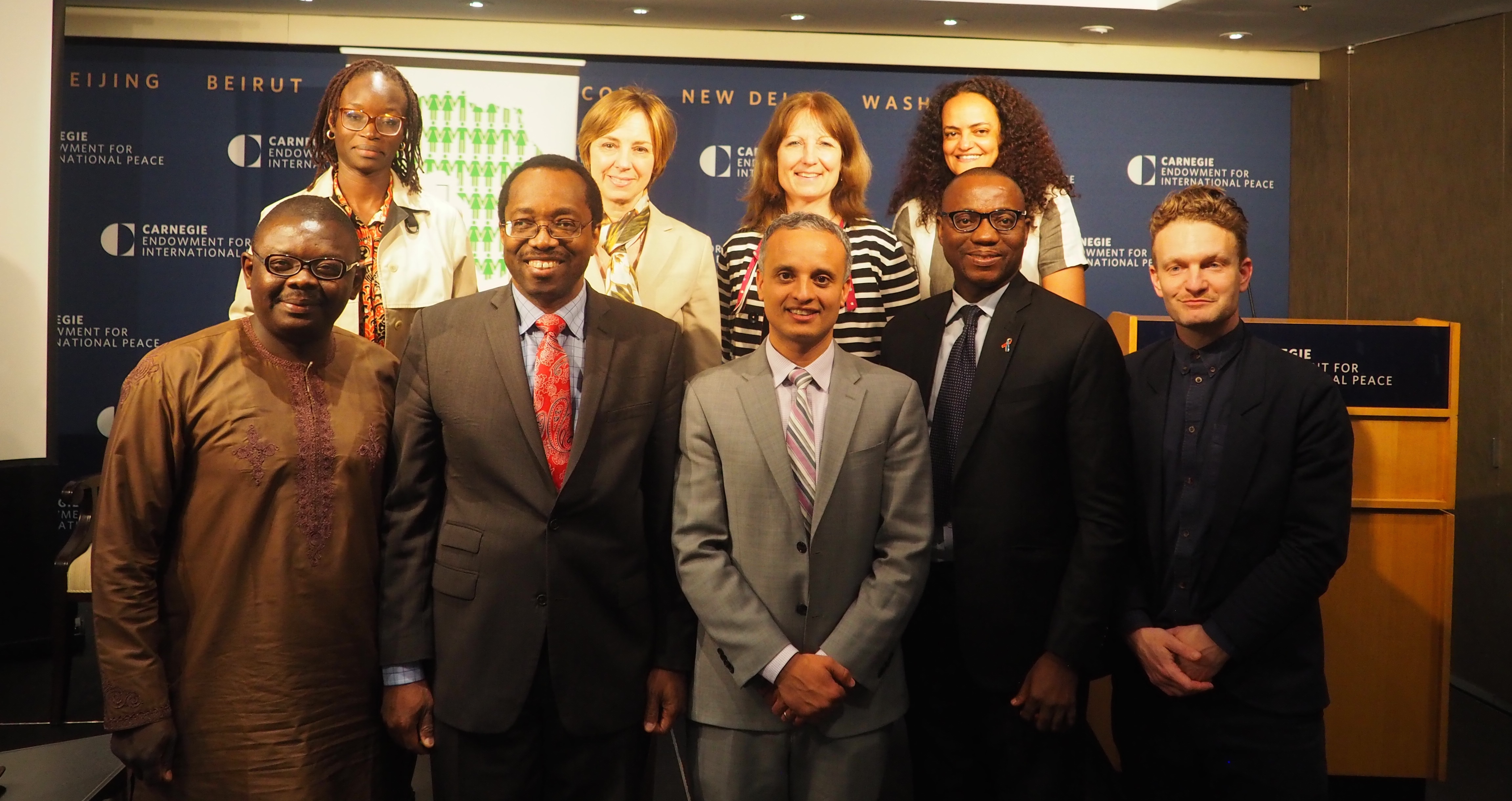 The Carnegie Endowment for International Peace, in collaboration with the African Peacebuilding Network (APN) of the Social Science Research Council (SSRC), hosted a conference on Militancy and Conflict in the Sahel and Maghreb in Washington, DC, on April 12, 2017. The day-long event focused on the rise of violent extremists, insurgents, and non-state actors within the security complex of the Sahel and Maghreb regions and how best to address these issues locally, regionally, and internationally.

The discussions centered on key security challenges in North and West Africa and how best to stymie the proliferation of armed groups and violence. Panelists also discussed lessons from the Western response to conflicts in Libya and Mali, and examined how weak regional institutions, corruption, poor governance structures, and government neglect have made communities more susceptible to terrorist or armed non-state actors looking to recruit members.

The event brought together scholars, policymakers, practitioners, civil society members, non-governmental organizations, and journalists to review the current state of security, governance, and stability in the region.

Michele Dunne, the director and a senior fellow of the Carnegie Middle East Program, and Cyril Obi, the SSRC’s APN program director, welcomed attendees to the event and highlighted the migration of violent extremism from northern to western regions of Africa, as well as the challenges faced by the international community in dealing with internal domestic instability and political crises in the region, during their opening remarks.

APN Advisory Board member Anouar Boukhars moderated a session on “The Security Complexes in the Maghreb and Sahel.” The panel discussed links within the security complex, the response to the mobilization of jihadist groups, the role Algeria might play as a regional security broker, and what motivates the participation or complicity of local people in certain extremist networks.

The panel addressed national responses to extremist groups in Mali and Nigeria, and the historical, socioeconomic, and religious inequalities influencing their expansion. Professor Whitehouse spoke of the competing nationalisms in Mali, particularly Malian and Tuareg nationalism. He argued that these nationalisms are shaped by cultural mythologies, with Malian nationalists viewing Tuareg separatists as an existential threat to the Malian government, even more so than jihadism. In his concluding statements, Professor Whitehouse emphasized that competing conceptions of the state’s legitimacy, rather than terrorism, are at the core of the tension in Mali, and that an exclusively top-down approach to peacebuilding fails to address the underlying issues behind the country’s conflict.

Dr. Lar spoke of insecurity and militancy in Kaduna State and Bauchi State of Nigeria. He examined how the concept of security is influenced by the relationship between the state and the minority Hausa Christian population, using this as a lens to explain the distrust between Christian communities and predominantly Muslim governments, and conversely, between Muslim communities and predominantly Christian governments. He also detailed the history of how contestation for land has provoked conflict, collective violence, and increased mobilization of arms, especially in central and northeastern Nigeria. Dr. Lar noted that Boko Haram’s indiscriminate attacks have also led to the pluralization and hybridization of security forces that combine local police, vigilante groups, and national security forces. He concluded by advocating for the Nigerian government to recognize the social legitimacy of religious and local leaders in security sector reform, citing northwestern Nigeria as an example of local leaders’ efforts curtailing the presence of Boko Haram in the region.

In his presentation, Mr. Nwokeoma examined the internationalization of the conflict with Boko Haram, through their abduction of the Chibok girls and Nigeria’s efforts to weaken the terrorist groups’ stronghold in the Northeast. He noted that President Muhammadu Buhari partially fulfilled his campaign promise of reducing Boko Haram’s territorial control; however, at present, an even more dangerous threat to peace and security in Nigeria is Boko Haram’s use of suicide bombings. He argued that in spite of Nigeria’s skilled army of 100,000 troops, they have failed to successfully rescue most of the Chibok girls nor contained Boko Haram’s attacks, due to the military’s state-centric approach and lack of local support.

Speaking on the rise of self-defense groups and militias in northern and central Mali, Dr. Niang detailed motivations for religious radicalization in the country. Similarly to Professor Whitehouse, she argued that the problem in Mali, and that of the Sahel region in general, is one of governance. She noted that the Islamization and violent radicalization of groups opposed to the national government has become a means for minorities to gain leverage, as armed groups are more likely to receive invitations to peace talks. She detailed how various pro-Bamako, anti-Bamako, and radical anti-Bamako self-defense groups have mobilized, particularly in areas of neglect by the central government. In conclusion, Dr. Niang emphasized that jihadism is not the primary challenge facing Mali, and that one must understand the multifaceted nature of deep-rooted issues in Malian society and the country’s forms of governance to fully understand the conflict.

During the conference’s lunch, Eric Schmitt of the New York Times discussed his experiences as a journalist in the region, and Western and local counterterrorism strategies in the Sahel. He spoke to U.S. policy towards Africa, particularly with regard to counterterrorism and discussed the military exercises that he has witnessed. He particularly highlighted the essential nature of diplomacy and the U.S. Department of State in the counterterrorism fight, emphasizing that military force might kill a great deal of terrorists, but that terrorism itself would not be extinguished without a holistic, non-military approach.

The subsequent panel focused on the spillover of Libya's conflict into the Sahel, featuring Frederic Wehrey and Intissar Fakir of the Carnegie Endowment for International Peace; Manal Taha of the United States Institute of Peace; and Faraj Najem, who video-conferenced in from Libya where he is the director of the Africa Research Center. Calls were made for a more localized and inclusive approach to peacebuilding that empowers civil society, regional institutions, and other local actors.

All of the day's panels encouraged the promotion of informed policy that draws attention to the importance of understanding how terrorist and non-state armed groups transition, evolve, and adapt to regional realities by strengthening their networks and taking advantage of “failed” states and “ungoverned” spaces.

The conference provided a necessary platform for a diverse array of actors working in and on policy about the Sahel and Maghreb regions to share their expertise and discuss solutions to various conflicts in the region. Its takeaway message made clear that there is much work to be done to curb the spread of violent extremism in the Sahel and Maghreb regions, and any long-term solutions must go beyond military-based approaches.