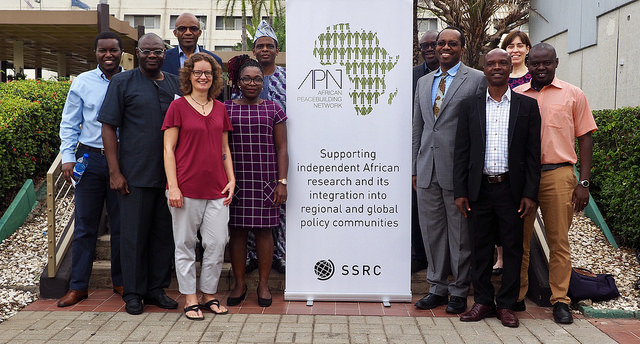 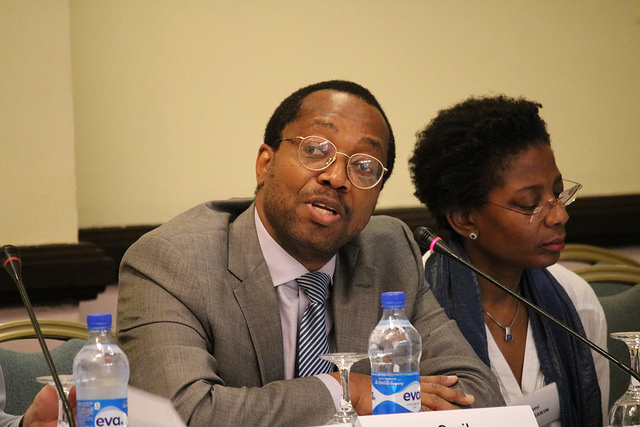 The conference was the fourth in a series of collaborative events on the theme of African Perspectives on Peacebuilding, with this event following three prior conferences: “Peacebuilding in Africa: Evolving Challenges, Responses, and New Thinking,” held in February 2015, “Conference on Peacebuilding in Africa: Developing African Approaches,” held in March 2016, and “Sustaining Inclusive Civil Society Engagement," held in March 2017.

The meeting brought together forty-one participants from nine African countries to engage in a series of high-level dialogues on African peacebuilding over the course of three days, alongside participants from the UK, the USA, Nepal, and Canada. Among the participants were 7 APN alumni, Advisory Board Members: Profs. Ayodeji Olukoju, Kenneth Omeje (IRG 2013), and the chair of the Advisory Board Prof. Ismail Rashid. Other APN Alumni who took part in the event were Dr. Kialee Nyiayaana (IRG 2013) of the University of Port Harcourt, Nigeria, Dr. Duncan Omanga (IRG 2014) of Moi University, Kenya, Dr. Cori Wielenga (IRG 2013) of the University of Pretoria, South Africa, Dr. Rhuks Ako of the Institute for Oil, Gas, Energy, Environment, and Sustainable Development (OGEES), Afe Babalola University, Nigeria (CWG 2014-2016), Dr. Dauda Garuba (IRG 2015) of the Nigeria Extractive Industries Transparency Initiative in Abuja, Nigeria, and Dr. Amanda Coffie (IRG 2016) of the University of Ghana. Dr. Devon Curtis a former APN Advisory Board Member also attended the conference.

The primary purpose of this event was to critically examine the future prospects of peacebuilding on the continent and explore options for strengthening Africa’s voice and contributions to global peacebuilding. It examined the state of contemporary African peacebuilding, identifying existing innovations, achievements, and challenges. The themes also included a review of global peacebuilding on the continent, focusing on the impact of regional efforts, international partnerships, and multilateralism on peace and security in Africa. Comparative perspectives were also included to enrich reflections by policy-makers, practitioners, and civil society actors attending the meeting.

The main conference was preceded a day earlier by a special panel discussion held on March 19, on “The emerging challenges and future prospects for peacebuilding in Nigeria.” This was an open event that welcomed members of the public and media. Introductory remarks were delivered by Dr. Kayode Fayemi, the Nigerian Minister for Mines and Steel Development, UK High Commissioner to Nigeria Paul Arkwright, and Wilton Park Advisory Council Member Myles Wickstead.

The discussion focused on the three major conflicts and security challenges facing Nigeria: the Boko Haram insurgency to the North-East, the series of farmer-herder conflicts primarily affecting the North-Central region, and the renewed insurgency in the oil producing Niger Delta region. The speakers addressed questions of the drivers of conflict, including grievance, exclusion, unemployment, the crisis in education, and the erosion of family values. This dovetailed into discussions on conflict resolution and prevention, community resilience, and how to strengthen local peacebuilding efforts. Emphasis was placed on the importance of both top-down and bottom-up approaches to peacebuilding.

APN Program Director Cyril Obi, along with Shuvai Nyoni of the ALC and Wilton Park Advisory Council Member Myles Wickstead of Wilton Park, delivered opening remarks on the first day of the main event. Dr. Obi highlighted some of the major, and sometimes divergent trends in conflict and peacebuilding in Africa, including localization, nationalism, and regionalism, and the increased role of non-state actors in conflict and peace. He also spoke on the role of the APN in projecting African voices onto the global stage to influence scholarship, policy and actions on peacebuilding, as well as challenging simplistic and harmful global discourses that portray Africa as source of threats.

APN alumnus Dr. Dauda Garuba (IRG 2015), a technical adviser at the Nigeria Extractive Industries Transparency Initiative in Abuja, facilitated a working group on energy and climate change. He gave a brief survey of some of the technological, political, and legal strategies that African countries could pursue in order to adapt to global climate change and build peace. Discussions covered options for addressing the challenges emerging from climate change and moving towards more sustainable use of energy. These included funding for additional research on climate change, including vulnerability assessments; investments in cheaper renewable energy sources; development of drought resistant crops; new approaches to grazing rules to mitigate the ongoing farmer-herder conflict in West African and the Sahel; and a concerted campaign of reforestation of arid regions carried out in a way that involves and benefits communities.

APN alumnus Dr. Cori Wielenga (IRG 2013), senior lecturer at the University of Pretoria, chaired a “Roundtable on Youth, Conflict Prevention, and Peacebuilding,” which focused on the role of African youth as a force for peace, particularly with regard to conflict prevention and peacebuilding. The panel emphasized that African youth were not a monolithic group and that they experience a wide variety of social, economic, and political pressures. Speakers highlighted the increasingly prominent role of youth in building social movements that push for peace and justice, and challenge governments to build systems and structures that harness their energy and creativity.

APN alumnus Dr. Rhuks Ako (CWG 2014-2016), a senior fellow at the Institute for Oil, Gas, Energy, Environment, and Sustainable Development (OGEES), Afe Babalola University, Nigeria, chaired a session on “What changes are we seeing in peacebuilding governance, peacebuilding, and ideology?” The session explored the ways in which the institutions, norms, and ideology that shape peacebuilding in Africa are changing in light of new and evolving forms of violence; the impact of economics on peacebuilding; and the role of women. Emphasis was put on the need to increase local ownership of peace processes as opposed to top-down approaches that cannot address the complexity and fragmentation of local contexts. Although external actors were deemed necessary, participants felt that new forms of partnerships are required to promote better outcomes and ensure equality between locals and external interveners.

APN Advisory Board Member and alumnus Kenneth Omeje (IRG 2013), a visiting professor at the Institute for Peace and Security Studies at Addis Ababa University, participated in a session on “How will peacebuilding mechanisms and frameworks change in light of new and emerging trends.” Prof. Omeje emphasized the need to improve service delivery and rethink approaches to security. He noted that the prevalence of weak state institutions which propagate exclusion and corruption will continue to allow armed groups to take advantage of state fragility through organized crime, and will allow extremist groups to keep recruiting youth. He also proposed an increase in partnerships between the state and non-state actors in security provision.

Andrea Johnson, a program officer at Carnegie Corporation of New York working on the Corporation’s Higher Education and Research in Africa and Peacebuilding in Africa teams, chaired a session on “Requirements for Africa’s engagement to influence the future of global peacebuilding,” which explored how Africa can play a leadership role in the future of global peacebuilding, inform action and decision-making, and create mutually beneficial partnerships. The panel emphasized the importance of strategic engagement between Africa and foreign partners, in which African voices are given priority in issues concerning their affairs. The need to appreciate the political ramifications of peacebuilding interventions for locals was also highlighted.

Prof. Ismail Rashid, the APN Advisory Board Chair, participated in final session on the “Future dynamics of peacebuilding in Africa,” which analyzed the emerging trends in the peacebuilding arena and what African stakeholders can do to be prepared. The session also reviewed the key insights and policy options proposed during the discussions, and gave participants an opportunity to share their final observations and take-aways. Some of the observations made were: the need to reform the African Peace and Security Architecture to make it more flexible and dynamic; the need for long-term holistic solutions that take local contexts into account and prioritize local participation; the need to distinguish peacebuilding from military stabilization efforts; and the need to emphasize preventive peacebuilding initiatives.

Following the conference, the APN director and the Vice-Principal International of Kings College London met for an additional day to convene a book publication meeting, organized by the APN and the ALC.