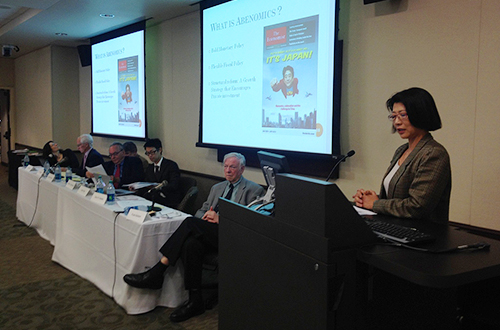 SSRC and New York University Press established a Possible Futures Series to examine the world economy after the global financial crisis. The first three volumes were published in April 2011. (http://www.ssrc.org/publications/view/possible-futures/)

The unprecedented natural and man-made disasters in March 2011 warranted a multidisciplinary look into Japan’s future by 17 social scientists. They convened to discuss papers for an edited volume at Hayama, Kanagawa on June 30-July 1, 2012. The resulting essays look beyond recovery to the years ahead and examine political leadership, nuclear policy, demography, gender issues, science and technology, rivalry with China, and security policy. “Japan: The Precarious Years Ahead” will be published as the fifth book of the Possible Future Series.

On January 31, the SSRC and the University of Southern California co-sponsored a public symposium “Possible Futures for Japan”to publicize the forthcoming book and stimulate discussion of the issues facing Japan. The event featured three of the authors who spoke on the following topics: finance and the economy, preparing for future disasters (earthquakes), and revision of the constitution. The presentations and discussionsargued that in the near future Japan is likely to encounter a series of challenges: controlling the fiscal debt while simultaneously pursuing Abenomics to stimulate growth; restructuring disaster management systems; maintaining democratic principles in discussions for revising the constitution; finding ways to deal with the deteriorating job and life prospects for youth; and seeking to establish good relations with neighboring countries.

This project was supported by a generous grant from the Japan Foundation Center for Global Partnership.