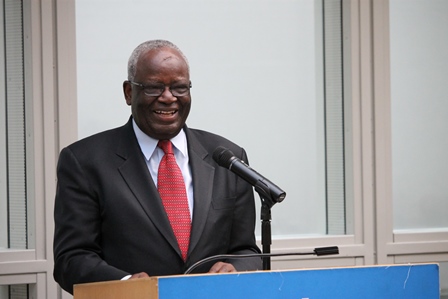 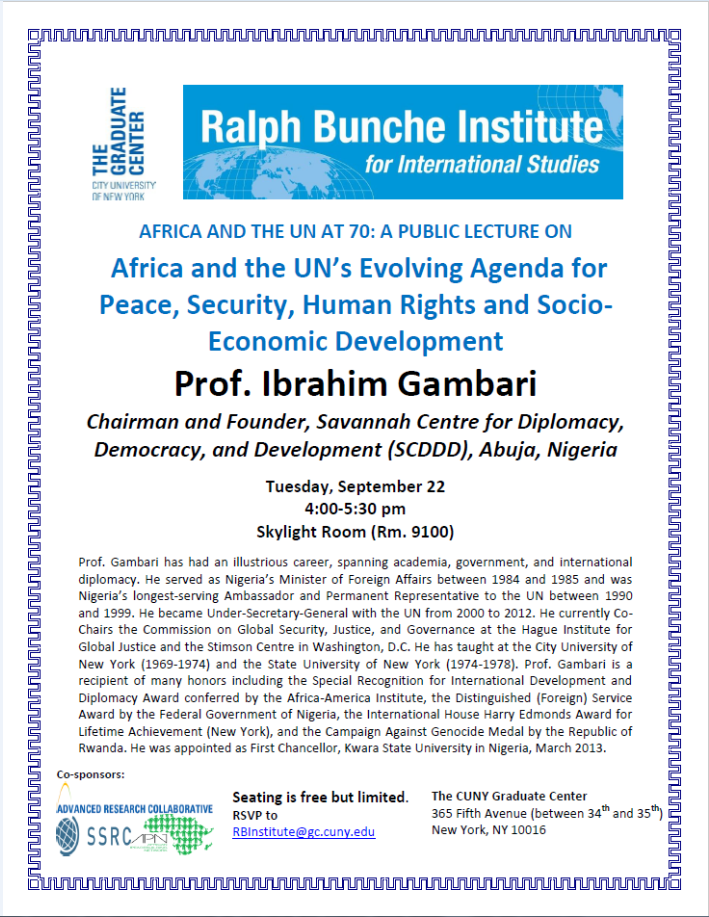 A public lecture by Professor Ibrahim Gambari was held Tuesday, September 22, 2015, at the City University of New York (CUNY) Graduate Center in New York, NY. The event, hosted by the Ralph Bunche Institute for International Studies, was co-sponsored by the African Peacebuilding Network (APN) of the Social Science Research Council and the Advanced Research Collaborative (ARC).

Speaking on the topic “Africa and the UN’s Evolving Agenda for Peace, Security, Human Rights, and Socio-Economic Development,” Prof. Gambari noted the significant steps made by African nations toward peace, but acknowledged continued challenges and setbacks faced by the continent and the UN Security Council since the end of the Cold War. He pointed to such things as the strained relationship between the UN and the African Union, as well as the limited success of UN interventions on the continent, calling for a broader representation of African voices in the UN’s decision-making bodies and the need to reform the UN Security Council.

Citing examples such as Mali, Darfur, and Somalia, Prof. Gambari suggested that the UN change its approach to peacekeeping interventions and not go into conflict-affected countries without the support of African states, claiming that Africans have the responsibility to address these conflicts themselves first. He also stressed “the need to change the old narrative about Africa in order to catch up with the realities of the continent,” and that while “colonialism has defined our past…we should not let it continue to define our future.” In closing, Prof. Gambari discussed the importance of best practices, fundamental freedoms, and human rights, and the role they all play in advancing peace on the continent, staying “These are not Western values…they are basic, and they are things Africans must accept.”

Prof. Gambari served as Nigeria’s Minister of Foreign Affairs between 1984 and 1985, and was Nigeria’s longest-serving Ambassador and Permanent Representative to the UN between 1990 and 1999. He became Under-Secretary-General with the UN from 2000 to 2012. He currently serves as the chairman and founder of the Savannah Centre for Diplomacy, Democracy, and Development (SCDDD) in Abuja, Nigeria.