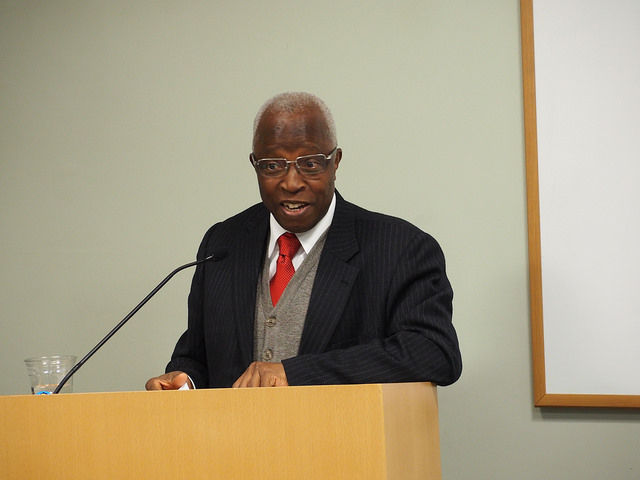 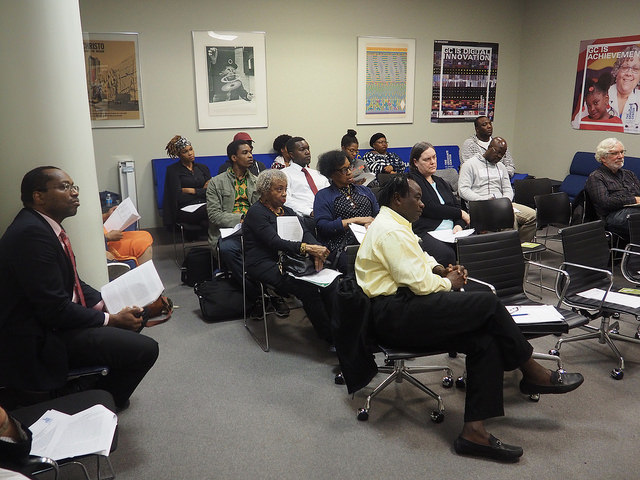 The African Peacebuilding Network (APN) of the Social Science Research Council (SSRC), in collaboration with the Advanced Research Collaborative (ARC) of the Graduate Center, City University of New York (CUNY), hosted a public lecture on “Reflections on Democracy and Development in Africa” delivered by the esteemed Nigerian academic, Professor Oladipupo Adamolekun. His incisive presentation showed a deep familiarity with the literature, and reflected insights drawn from his vast experience in the public service, and academia.

Following the welcoming remarks from Prof. Donald Robotham of the ARC, APN Program Director Dr. Cyril Obi introduced the speaker. In his introduction, Dr. Obi described Prof. Adamolekun as the “quintessential scholar-practitioner,” due to his impressive record of service in universities, government and international institutions such as the World Bank.

In making his case the presenter used four indexes as proxies to measure the level of democracy and development. These are: the Ibrahim Index of African Governance, the Global Prosperity Index, the Human Development Index, and the Corruption Perception Index. Prof. Adamolekun rated each country’s relative democratic practice and development performance on a continuum, with those that had performed well: Botswana, South Africa and Ghana on one end, and those that had performed poorly: the DRC, Nigeria, Congo, Zimbabwe and Cameroon on the other. Those in the middle were Kenya, Tanzania, Senegal and Rwanda.

Prof. Adamolekun’s rating system took into account the level of adherence to democratic principles such as the rule of law and electoral legitimacy. The data indicated generally poor performance among less-democratic states such as military regimes, authoritarian governments and overly centralized states. The evidence suggests, he argued, that countries with constitutional arrangements that devolve real power to state or local authorities are better for fostering democracy and thus, development. He also emphasized that democracy matters not only for overall national wealth, but also the distribution of that wealth among citizens, emphasizing that inclusive political arrangements promote inclusive economic arrangements. It is no surprise therefore, that economies which are primarily extractive in nature often mirror the colonial state in the exclusivity of their political institutions and the disparity in economic outcomes. These arrangements, he noted, hurt the prospects for development and make political violence more likely.

Overall, Prof. Adamolekun did not subscribe to the view that external actors such as the AU, Regional Economic Communities (RECs), World Bank, UN or western powers, were responsible for the inability of many African countries to develop strong economies and functioning democratic institutions. Rather, he placed significant emphasis on the internal dynamics within countries as the key determining factors in all but a few cases, such as apartheid South Africa.

The lecture was followed by an engaging question and answer session which touched on the relative inclusivity of various democratic political arrangements in Africa and the problems therein. Several attendees also took the opportunity to push back against some of Prof. Adamolekun’s conclusions, especially those regarding the supposed “limited” role of external actors.

One questioner remarked that where the majority ethnic group dominates politics and excludes others, as is the case in many African countries, that arrangement should not be considered a democracy (even though elections take place frequently). In response, Prof. Adamolekun reiterated the need for inclusive and participatory political arrangements and not merely majoritarianism. He specifically alled for decentralization of power and noted that countries with such institutions are more likely to achieve economic development.

In response to Prof. Adamolekun’s remarks regarding external actors, one attendee cited Dambisa Moyo’s 2009 book, Dead Aid which analyses the history of economic development in Africa and shows how foreign aid and economic interventions have harmed the continent. Other participants also emphasized the role of external actors in shaping economic and political outcomes in Africa. Various questioners asked about the impact of US foreign policy in the form of democracy promotion, and the effect of structural adjustment programs (SAPs) advocated by international financial institutions. Prof. Adamolekun noted that while there was involvement and interference by external actors, this was typically not what determined democracy and development outcomes. He agreed that democracy promoters were more engaged in pushing the idea of democracy as a good in its own right than for the purpose of promoting development, but argued that “the overall impact of the external actors was rather limited.” Other than the exceptional case already mentioned each country’s performance came down to “internal dynamics of the forces for, or against democracy.” The speaker noted that the question of the impact of foreign actors may be a good area for future research.

Professor Adamolekun’s response to the question of SAPs was detailed and nuanced. He noted that the programs have been maligned because only a small number of countries that took the conditional loans succeeded in achieving both stability and decent growth levels while the negative effects on the social sector and increased dependence on developed economies were evident in most countries, especially in Africa. In his view, while some of these criticisms are valid, it was also the case that half-hearted implementation of SAPs in a number of countries accentuated their negative consequences. While not being entirely comfortable with the programs, he emphasized their poor implementation as a major reason for their failure, responsibility for which cannot be placed entirely on Western institutions.

Prof. Mojubaolu Okome of Brooklyn College, CUNY, sought further clarity on the concepts of “development” and “good governance,” so as to delve deeper into the supposed relationship between democracy and development. She expressed concern that the “democracy promotion industry” of western international institutions does not take sufficient action to mitigate the inequality that often accompanies economic growth as conceived within the neoliberal framework. Prof. Adamolekun, who himself has worked at the World Bank, concurred with her analysis, noting that the World Bank’s notion of good governance has not been comprehensive.

A member of the audience asked the professor for his opinion on how models of government, and knowledge systems of African traditional society can inform governance practices on the continent today. In his response, Prof. Adamolekun cited Botswana as a case in which the modern and the traditional have been successfully integrated. He expressed support for creative ways of modernizing economies while integrating traditional institutions, noting that this can mitigate some of the political problems of modern democracy. In Botswana for example, granting minorities limited autonomy over their social and political arrangements decreases sentiments of exclusion which can undermine stability and lead to conflict.

Overall, Prof. Adamolekun made a strong case for the claim that democracy promotes development and provided substantial empirical evidence. Major takeaways from the talk include: the strong link between the rule of law and electoral legitimacy, the negative impact of military rule on economic performance, the need for political decentralization, and the primacy of internal dynamics in determining political and economic outcomes.

Prof. Adamolekun’s talk will be published as part of the APN’s new lecture series

View photos from the event here.