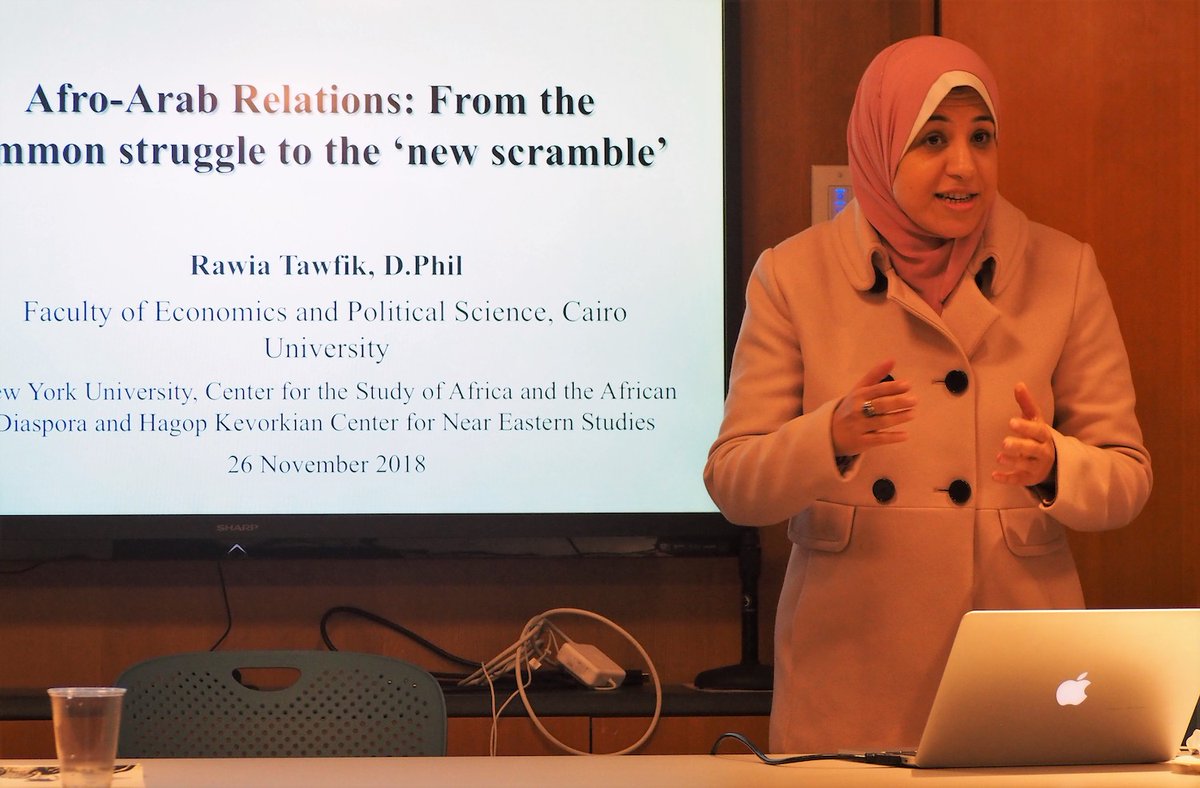 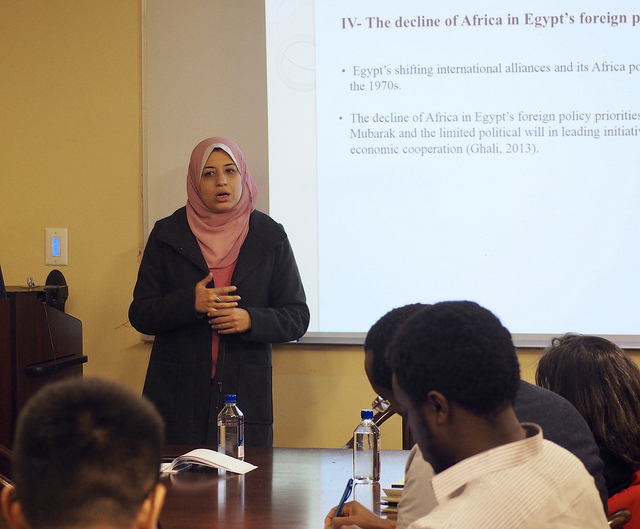 Dr. Tawfik’s first lecture at NYU’s Hagop Kevorkian Center for Near East Studies traced the continuities and changes in Afro-Arab relations over the last six decades by carefully mapping the trajectories, actors, interests, and policies that shaped the unfolding alliances and rivalries between and within the two regions. She questioned whether renewed Arab interest in Africa is an asset for Africa’s peace and development or part of the "new scramble" for Africa’s political and economic resources. Her talk was followed by a response from Ben-Dor Benite, a professor in the Department of History and in the Department of Middle Eastern and Islamic Studies at NYU.

Dr. Tawfik explained that the post-Independence period was considered a "golden age" for Afro-Arab relations due to North African support for liberation movements and a view of Pan-Africanism that did not separate North and Sub-Saharan Africa. The 1980s and 1990s were, however, decades of disengagement due to the decline in oil prices and decreased Arab economic support for Africa, Egypt's peace with Israel, Morocco’s withdrawal from Organization of African Unity, the Chadian-Libyan conflict, the end of the Cold War, and divisions in Arab world.

Dr. Tawfik suggested that Afro-Arab relations have moved "from collectivism to bilateralism," which we see in the increase in military bases in the Horn of Africa and the use of investments for strategic political ends, particularly in Eastern Africa. In the Horn, Gulf countries have increased their military presence to counter the activities of extremist movements and carve out spheres of influence against Iran and its proxies. The use of economic (and political) leverage to influence the region has played a role in shifting the balance of power in the North East Africa/Nile Basin region (Eritrea, Djibouti, Sudan, Ethiopia, and Egypt) and risks exporting the Middle East’s divisions into Africa.

Despite more diversified engagements by Gulf Countries in Africa, there does not appear to be a long-term strategy that sustainably contributes to African peace and development. Dr. Tawfik also highlighted the fact that Arab engagement with Africa is still state-controlled with little involvement from the private sector and civil society (except religious associations).

Her second lecture, given at Columbia University’s Institute for African Studies, was titled "Egypt in Africa: Between Security Priorities and Economic Constraints." This lecture addressed Egypt’s revived interest in Sub-Saharan Africa after decades of marginalizing the continent in its foreign policy priorities, especially under former President Mubarak. She cited the active presidential diplomacy under President Sisi and the restructuring of several institutions responsible for implementing Egypt’s Africa policy as key reasons for renewed engagement with Africa.

The years of absence led to a failure to recognize and respond to changes in the region which has exposed Egypt's vulnerabilities, for example, Ethiopia’s unilateral construction of the Grand Ethiopian Renaissance Dam and the stalemate over the Nile Basin Cooperative Framework Agreement (CFA). The decline of Africa in Egypt's foreign policy also led to Egypt punching below its weight in regional conflicts in, for example, Sudan and Somalia.

Dr Tawfik examined Egypt’s rising interest in Africa and whether it has been translated into a clear vision of a new Egyptian role in the continent. She argued that state domination and cooptation of civil society in Egypt have affected the sustainability of Egypt’s foreign policy activism in Africa and engendered a security driven agenda toward the continent. However, in response to its suspension from the AU in 2013 and what it perceives as increasing threats to its national/water security, Egypt has restored its diplomatic activism and is investing in improving its image on the continent.

Egypt's Foreign Ministry has identified their priorities as: maintaining Egypt's acquired share of the Nile, fostering cooperation with Horn countries, promoting economic relations through the Common Market for Eastern and Southern Africa (COMESA), and protecting Egypt’s strategic depth in the Sahel through development and security cooperation. However, Dr. Tawfik added, Egypt was yet to elaborate a new role for itself that responds to changes on the continent, emphasizing its security priorities, including maintaining water and border security, over deepening economic ties.

On November 27, Dr. Tawfik spoke at Rutgers University–Newark on "Testing Environmental Peacebuilding: Challenges to Cooperation in the Eastern Nile." She examined the claims made by proponents of "environmental peacebuilding," which advocates for environmental cooperation as a key factor in peaceful relations between countries, finding that their assumptions do not hold in the Eastern Nile region (Egypt, Ethiopia, and Sudan).

Dr. Tawfik argued that the relationship between environmental cooperation and peace has been assumed rather than substantiated and that the relationship between the two variables is more complex and non-linear than the theory suggests. In addition, environmental challenges and cooperation opportunities are not “objective facts” but subjective assessments by state and non-state actors.

Until about a decade ago relations between the Eastern Nile countries were seen as a positive case of environmental peacebuilding—turning conflict over transboundary relations into opportunities for greater cooperation. The role of the Nile Basin Initiative (NBI) was cited as an example of this. Dr. Tawfik emphasized the need to look at relations between the three countries at the bilateral level because water cooperation has impacted non-water cooperation in different ways between the Eastern Nile states. For example, in recent years, Ethiopia-Sudan relations have improved while Egypt-Ethiopia relations have deteriorated. Moreover, Egypt-Sudan’s historical hydro-political alliance did not lead to strong cooperation in other areas.

Dr. Tawfik explained that contrary to the expectations of environmental peacebuilding proponents, the three governments’ perceptions about the benefits and priorities of cooperation on and beyond water resources have not changed despite intense engagement and dialogue. While advocates of environmental peacebuilding assume that each country's definition of cooperation and their priorities for water cooperation will coincide, this did not happen in the Eastern Nile region. For example, Egypt wants to maintain its share while Ethiopia wants to renegotiate terms and increase interdependence in other areas based on comparative advantage. Egypt, which already feels vulnerable due to overdependence on the Nile River, is keen to avoid dependence in other strategic areas.