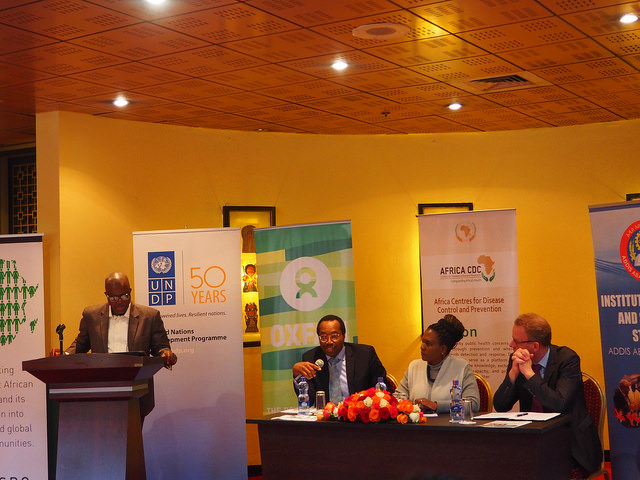 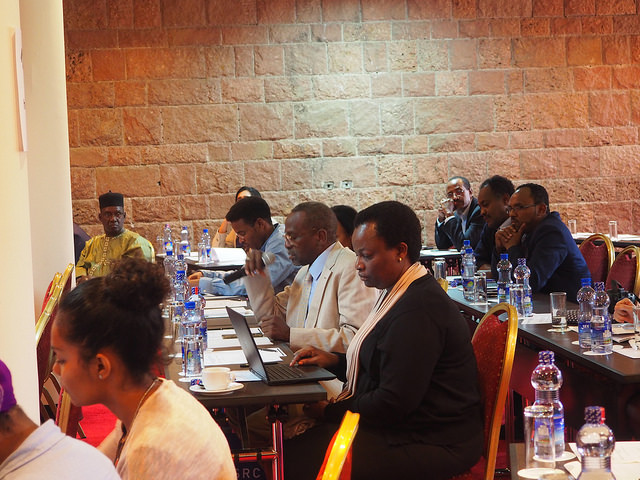 On August 26, 2016, the Institute of Peace and Security Studies (IPSS) of the Addis Ababa University (AAU), in collaboration with the Social Science Research Council’s (SSRC) African Peacebuilding Network (APN), the African Union Commission (AUC), the Oxfam Liaison Office to the AU and the United Nations Development Programme (UNDP), launched a report based on the proceedings and resolutions of the High-Level Roundtable on Governance Issues in the Multi-Stakeholder Response to the Ebola Virus Disease (EVD) in West Africa that took place at the African Union Commission in April 4th, 2016 http://www.au.int/en/pressreleases/27349/roundtable-governance-issues-multi-stakeholder-responses-ebola-virus-disease-evd.

The launch of the report which took place at the Hilton Hotel, Addis Ababa, featured high-level policy makers, practitioners, activists and scholars, including APN grantees. The aim of the launch was to disseminate the recommendations from the High-Level Roundtable, provide stakeholders with an opportunity to review the highlights of the report and brainstorm on a set of follow-up initiatives that would facilitate more effective and better coordinated responses to the outbreak of similar epidemics in the future.

Opening remarks were made by the representatives of the IPSS, Prof. Charles Ukeje, African Union’s Department of Social Affairs (AU-DSA)’s Wynne Musabayana, UNDP Regional Centre for Africa’s Gerd Trogemann and the SSRC-APN’s Cyril Obi. During the discussions, Professor Charles Ukeje, noted the importance of research-based knowledge in the framing of effective and timely responses to epidemics, while the UNDP’s Deputy Director Gerd Trogemann stressed the critical role of the private sector in such responses. In her contribution to the debate, the African Union’s Deputy head of information and communication, Wynee Musabayana, highlighted the important contribution of the Africa Center for Disease Control and Prevention in ensuring that the spread of the EVD epidemic in West Africa was effectively checked. On his part, the SSRC-APN’s Program Director Cyril Obi reflected on the ramifications of the report for understanding the linkages between governance and health in Africa. There were also contributions to the debate by members of the audience who spoke to various aspects of the report, particularly its recommendations and how to take some of the ideas forward in relation to policy formulation and implementation.

The concluding session involved discussions on the importance of recognizing the relationship between governance, health and human security in Africa. Participants also emphasized the importance of community-based knowledge, noting that health, economic, social, and cultural resources and infrastructure were critically important for mobilizing assistance to communities facing complex emergencies. According to a participant, “health related epidemics are too important to be left to healthcare professionals alone.” Many speakers recognized the need for urgent and concerted effort by a broad spectrum of stakeholders: CSOs, NGOs, the private sector, the Diaspora, affected communities, youth organizations, national governments, and inter-governmental multilateral institutions to manage and tackle health emergencies. There was also a consensus around the importance of information and experience-sharing and the effective coordination of efforts directed towards helping societies build resilience against epidemics. Thereby, reinforcing the capacity for effective, coordinated and rapid responses throughout Africa.