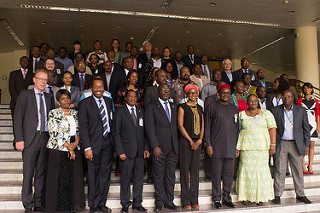 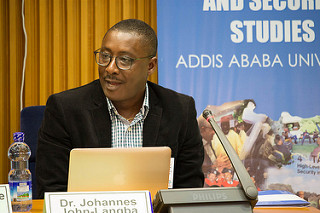 On April 4, 2016, African Peacebuilding Network staff took part in a high-level roundtable at the African Union (AU) in Addis Ababa, Ethiopia, focusing on “Governance Issues in the Multi-Stakeholder Responses to the Ebola Virus Disease in West Africa.” The event was held in collaboration with the African Union Commission (AUC), the Institute for Peace and Security Studies (IPSS) at Addis Ababa University, OXFAM International, and the United Nations Development Programme (UNDP).

The aim of the roundtable was to look beyond a health-related lens of the situation and provide a platform for deeper engagement and reflections on the Ebola outbreak, and the governance-related issues that arose. The event involved for the first time those who were at the forefront of the response with a broad spectrum of stakeholders, and gave those actors an opportunity to share firsthand their experiences with key policymakers. It also gave national governments, regional economic communities, and the AU a chance to reevaluate available emergency response options and work towards a better harmonization of future collaborations. Discussants addressed what worked and what did not, and what actions can be taken to both ensure and mobilize a timelier, more robust, and effective response towards similar threats in the future on the continent.

The keynote address was delivered by Nigeria’s former Honorable Minister of Health, Professor Onyebuchi Chukwu, who served in this capacity during a key period of the Ebola outbreak. He discussed tactics employed by the Nigerian state to contain and avert the outbreak, drawing upon lessons and comparing them with that of Guinea, Liberia, and Sierra Leone, the three countries most affected by Ebola. He noted key success factors, including institutional capacity and training of health professionals, media, screening of travelers, and proper protocol of burying the dead, to name a few. He also touched upon the need for development of more effective vaccines and drugs, the role of virology laboratories, stronger trans-border management and regulations, the institutionalization of personal hygiene and sanitization, and the role of information and communications technology (ICT).

By the end it was clear that more needs to be done to ensure information-sharing and linkages between various stakeholders—civilian populations, governments, regional actors, civil society organizations, public and private sectors, and the humanitarian community. Calls were also made for better management, improved funding, monitoring of people who recovered from EVD, and the delivery of basic resources. Noting the role of social science research in order to generate knowledge and actions necessary to better address such issues, Dr. John-Langba remarked, “We have the capacity on the continent, but it is scattered. We need to come together.”

Questions were also raised focusing on the importance of aid and budget accountability, and how that relates to local leadership as well as community trust and ownership. Participants agreed that governments should create more resilient public health systems, minimize the risk of resurgence, institutionalize health monitoring, and implement effective post-crisis management. Beyond this, emphasis was placed on the need for economic revitalization and growth, as well as more inclusive governance systems, particularly in those areas most affected by the Ebola virus disease.