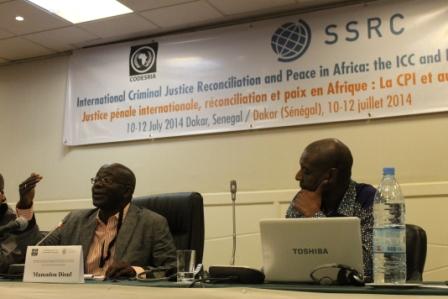 The Council for the Development of Social Science Research in Africa (CODESRIA) and the African Peacebuilding Network (APN) of the Social Science Research Council (SSRC), in conjunction with the Raoul Wallenburg Institute (RWI), the Centre for Democracy and Development (CDD) West Africa, and the Open Society Foundations (OSF), jointly held an international conference on the theme “International Criminal Justice, Reconciliation, and Peace in Africa: The ICC and Beyond.” The event took place in Dakar, Senegal, July 10–12, 2014.

The opening ceremony was chaired by His Excellency Mr. Sidiki Kaba, Minister of Justice of Senegal, who also delivered a keynote speech. Other participants included academics, jurists, policymakers, and (legal) practitioners within various international, regional, and national institutions, as well as leaders involved in civil society organizations and social movements across the continent. Also in attendance from the SSRC were Tom Asher, program director, Next Generation Social Sciences in Africa; Tatiana Carayannis, deputy director, Conflict Prevention and Peace Forum; Mamadou Diouf, chair, board of directors; and Ron Kassimir, senior advisor.

This conference is part of a two-phase program between the SSRC and CODESRIA, and builds on the reflections and recommendations made by both institutions during a brainstorming and planning meeting in September 2013 in Dakar. The conference provided an opportunity for leading scholars and practitioners to reflect on the International Criminal Court (ICC), international justice and reconciliation, and the prospects for peacemaking across the African continent. It also emphasized the need for international and transitional justice issues to be clearly understood and properly addressed for Africa to achieve sustainable peace and security for its people in the future.

A post-conference meeting was held on July 13, 2014 to evaluate Phase I of the program and discuss the goals of Phase II, which is expected to involve a much broader three-year research and policy engagement project. It is hoped that this next phase will reinforce the task of projecting African perspectives and voices in regional and global discourses and debates on international justice and peace.

Seven working papers were jointly commissioned and funded in part by the APN as part of a Special Issue on International Criminal Justice in CODESRIA's Africa Development Journal, focusing on a set of background studies and reviews to bridge existing research gaps and provide a strong knowledge base to inform debates happening on the continent. The studies address the complex relationships between international criminal justice, peace, and reconciliation in Africa and the role of the ICC, as well as the responses of African governments and civil society to the ICC’s interventions. Other financial contributors to the commissioned studies are CODESRIA, TrustAfrica, and OSF.