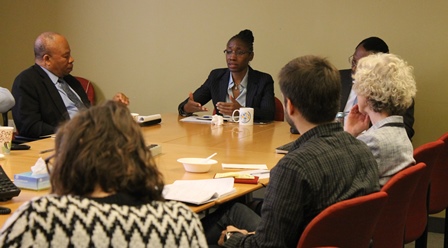 A leading expert on peacebuilding and security in Africa, Dr. Ero spoke on the topic “Regional Responses to the Challenges of Managing Peace in Africa: Lessons for the United Nations and Africa.” Her talk focused on the rise in regional responses to issues of peace and security in Africa, and unpacked critical questions of local partnerships and the various models used by African countries and their neighbors to resolve crises. She also made note of the tension that exists between the United Nations Security Council, the African Union (AU), and the various regional communities on the continent, highlighting their individual and collaborative efforts to resolving conflicts on the ground as well as their respective limitations.

The lecture was followed by an engaging group discussion on the realities and shortcomings of regional responses to peace and security on the continent, and ways the UN, AU, and regional bodies may improve their relations and streamline peacebuilding and peacekeeping actions to the benefit of all.

Dr. Ero has been Crisis Group's Nairobi-based Africa program director since January 2011. She previously worked with Crisis Group as West Africa project director. As program director, Dr. Ero oversees projects covering South, West, Central and the Horn of Africa. Her areas of expertise include conflict prevention, management, and resolution; mediation; peacekeeping; transitional justice; and politics and international relations of Africa. She holds a PhD from the London School of Economics, University of London.