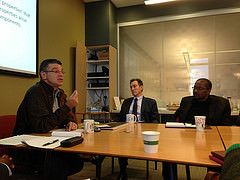 A leading expert on mediation who consults for the African Union (AU) and United Nations (UN), Professor Nathan focused on the topic “International Mediation as the Management of Complexity.” His talk addressed the importance of international mediation as well as the impact of academic research on the practice of mediation, while explaining its essence and the need to improve both its quality and efficacy.

Professor Nathan is a former recipient of an APN research grant (2013), which supports up to six months of innovative field-based research in order to produce knowledge that can impact practical actions on peacebuilding initiatives in Africa. During his tenure as a grantee, he focused on “Democratic Norms, Bias, and Uncertainty in African Mediation.” He then went on to publish a report based on his findings, titled “A Clash of Norms and Strategies in Madagascar: Mediation and the AU Policy on Unconstitutional Change of Government” (Mediation Arguments, no. 4, Centre for Mediation in Africa, University of Pretoria, 2013). A shorter version of this work was later published at Kujenga Amani, titled “Mediating in Madagascar: Bypassing the AU Ban on Coup Legitimization” (2013).

The lecture was followed by a group discussion, facilitated and led by APN advisory board member João Honwana. Mr. Honwana is the current director of the Africa II Division in the UN Department of Political Affairs in New York.