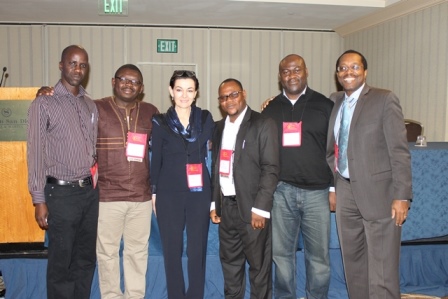 Thanks to a generous grant by the Carnegie Corporation of New York (CCNY), the African Studies Association (ASA) was able to organize three special joint panels at its 58th annual meeting in San Diego, California, November 19–21, 2015. The panels brought together twelve rising scholars from three CCNY-funded programs: the African Leadership Centre (ALC), the African Peacebuilding Network (APN), and the Next Generation Social Sciences in Africa Fellowship program (NextGen). Panelists were asked to present their work on the themes of peacebuilding, leadership, security, and development.

All panels featured a mix of scholars and fellows from the three programs. The APN’s panel was titled “Challenges and Innovations in the Study of Peacebuilding and Statebuilding in Africa,” and chaired by APN advisory board member Professor Catherine Boone. Dr. Godwin Onuoha of Princeton University served as discussant. Panelists included Jimam Lar (ALC), Kenneth Nwoko (APN), and Laurence Ocen (NextGen).

The ASA annual meeting is the largest gathering of Africanist scholars in the world. With an attendance of about 2,000 scholars and professionals, the conference offers more than 300 panels and roundtables plus plenary events featuring keynote speakers and an international exhibit hall for publishers. This year the theme focused on “The State and the Study of Africa.” Next year’s meeting is set to take place in Washington, DC, November 30–December 4, 2016.

The APN wishes to thank the ASA for ensuring a successful event, as well as CCNY for its generous support.