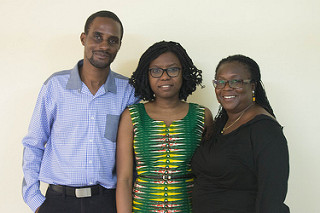 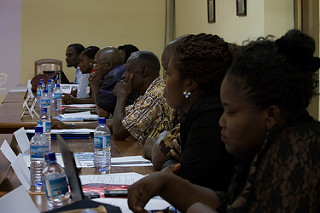 The African Peacebuilding Network (APN) supported a two-day regional training workshop in Accra, Ghana, on "Improving Media Coverage of Conflict and Peacebuilding in West Africa." The event, held March 30–31, 2016, at the University of Ghana, Legon, was organized by the university’s School of Information Studies in collaboration with the Legon Centre for International Affairs and Diplomacy (LECIAD). Journalists working in print, broadcast, and online media from across West Africa attended the workshop, specifically from the following countries: the Gambia, Ghana, Liberia, Mali, Nigeria, Senegal, and Sierra Leone. Participants represented the following media organizations:

APN 2014 grantee Professor Audrey Gadzekpo, (dean, School of Information and Communication Studies, University of Ghana), who helped to organize and facilitate the workshop, made the opening remarks. Welcoming remarks were also made by LECIAD director Professor Henrietta Mensa-Bonsu and APN program director Dr. Cyril Obi. A keynote address was given by Dr. Chukwuemeka Eze, executive director of the West African Network for Peacebuilding (WANEP). Presentations were also made by APN 2015 grantee Dr. Peace Medie and APN 2013 grantee Dr. Admire Mare.

The purpose of this workshop was to build the capacity of West African journalists in reporting conflicts, or potentially explosive situations, in order to mitigate the risks of the media contributing to violent conflict. It was also meant to build a consensus on how best to cover stories in peace journalism. Plenary lectures focused on the role of gender in peacebuilding and conflict; media partnerships in peacebuilding; media and elections-related conflict; theories and practices of peace journalism; and tools and platforms for disseminating stories on peacebuilding and conflict.

Emphasis was also placed on ethics, personal safety, security concerns, and effective communications strategies, along with the role of media in elections-related conflicts and the need for reporting in a balanced, neutral, and gender sensitive manner. Presenters also served as facilitators within smaller training groups where they helped participants brainstorm, refine, and provide feedback on draft news stories and reports.

By the end, it was clear that the media have an important role to play in peacebuilding, as well as a responsibility to draw out key issues related to peace and conflict. Session facilitators and lecturers cautioned, however, that there exists a clear difference between uncovering facts in a neutral manner and providing analysis and opinion in one’s reporting. All attendees were reminded that when covering a story, “Get it first, but first get it right.”

The event concluded with a closing plenary and feedback session moderated by Professor Gadzekpo and involving all participants. The journalists agreed that the workshop had positively impacted their peace journalism skills, and many were eager to report back in their home countries. All were keen to continue collaborating with one another through a shared network which they named the “West African Peace Journalists Network,” with the hope of finding ways to keep in touch via social media and professional contact.

Photos from this event can be viewed on APN’s Flickr page.

More on this event can be found here and here.