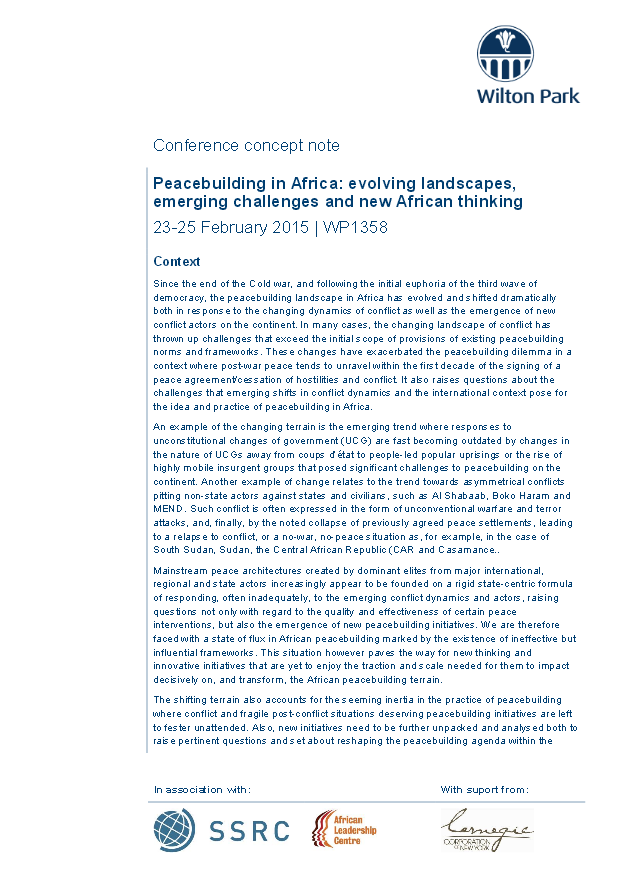 A conference entitled “Peacebuilding in Africa: Evolving Challenges, Responses, and New Thinking” was held February 23–25, 2015, at the Wilton Park conference center in Steyning, England. Funded by Carnegie Corporation of New York, the event was organized by Wilton Park in partnership with the African Peacebuilding Network (APN) of the Social Science Research Council (SSRC) and the African Leadership Centre (ALC).

Bringing together a host of key scholars, researchers, policy analysts, and practitioners, this conference sought to engage participants in a series of high-level dialogues that gave voice and space to African perspectives on peace. Held in roundtable format, these conversations were guided by the following questions: How do we approach the evolving conflict terrain in Africa and ensure that peace settlements do not collapse? Whose thinking is shaping the peacebuilding agenda today in Africa? How can peacebuilding structures that are designed by international actors positively impact or complement traditional approaches in countries of conflict? Do African local and regional actors have the capacity to effectively execute peacebuilding efforts?

Presentations were made by leading experts that focused on the evolving conflict terrain in Africa and emphasized how different contexts and conflict dynamics call for different peacebuilding approaches. These large discussions were complemented by smaller, parallel working groups that looked at alternative perspectives to peacebuilding and case study comparisons as a means of unpacking certain aspects of peacebuilding, specifically what works, where, and why.

Participants represented a host of institutions, including the United Nations (UN), the African Union (AU), and the East African Community (EAC). There was also scholarly participation from universities and think tanks across Africa, Europe, and the United States, namely:

Of those in attendance were four members of the APN’s advisory board: Awino Okech (ALC), Devon Curtis (University of Cambridge), ‘Funmi Olonisakin (King’s College London), and Maxi Schoeman (University of Pretoria). Also present were several APN 2013 individual research grantees, including Cori Wielenga (University of Pretoria), Kenneth Omeje (University of Bradford), and Kialee Nyiayaana (University of Port Harcourt), as well as APN 2014 collaborative working group member Jide Okeke (African Union Commission). Their presence, along with other ALC fellows, underscores the strength in partnership and collaboration between both organizations and their efforts to promote peace on the continent.

Of the many takeaways, it was emphasized that the peace and security terrain in Africa has changed significantly in the past few decades since the Cold War, and is running rapidly ahead of capacity. For this reason, peacebuilders ought to pay attention to patterns, trends, and shifting contexts and set long term goals in order to ensure that peace settlements do not collapse, while understanding exactly whose peace is being built in each context, and by whom. In order to broaden the thinking around peacebuilding, existing paradigms need to be reconsidered and new narratives identified and carried out, preceded by thorough and contextual analysis.

While peacebuilding’s regional dimension is becoming ever more important, it was agreed that peacebuilding has remained weakest at national, regional, and AU levels, and therefore local ownership and inclusivity must be incorporated, while also still recognizing the implications of cultural approaches themselves. The idea of consultation and dialogue should therefore be the model for African post-conflict societies—before, during, and after a conflict. Rather than relying so heavily on international actors, it may be useful to use the regional mechanisms that are already in place, but still seek the help of external actors to mainstream interventions. At the same time, participants felt that actors should seriously consider whether Africa has the resources to take charge of its own peacebuilding processes, and whose responsibility it is to implement and lead these efforts.

Finally, it was noted that there needs to be more documentation and reporting from societies affected by conflict—especially from the local level—and not just national data. Such an effort is essential for building a constructive knowledge base upon which thought and practice can come together in a more cohesive manner. In the future it will be important to address this gap by breaking down peacebuilding and looking beyond its technical concept to include local specificities. Moreover, it will be essential to address whose interests matter in peacebuilding contexts, who will take responsibility for driving those processes, and who will be included in their conversations. To that end, where do we locate Africa in terms of globalization, and how is it playing a role in global insecurities?

In an effort to continue this rich discussion, a second conference will take place later this year in Addis Ababa, Ethiopia. The aim will be to disseminate the ideas and thinking from the first meeting to a broader network of partners and policymakers. Planned as well is a collaborative book project to be jointly edited by the SSRC and ALC.