The SSRC’s Mellon Mays Graduate Initiatives Program (MMGIP) supports Mellon Mays Undergraduate Fellowship (MMUF) fellows through their graduate school years and the professoriate. Its programming is a series of events that target critical junctures in this process. The annual Graduate Student Summer Conference, held on the campus of a Mellon member school, is an introduction to MMGIP, as well as to what fellows may encounter in their first through third years of graduate school. It is modeled, in part, upon a professional association conference. Prominent keynote speakers are invited, and fellows submit abstracts and, if selected, present their work in a paper session forum with feedback from our Mellon PhDs. As most fellows are in American graduate schools, that has been the focus. The MMGIP has over 750 PhD recipients and over 700 graduate students in PhD programs. 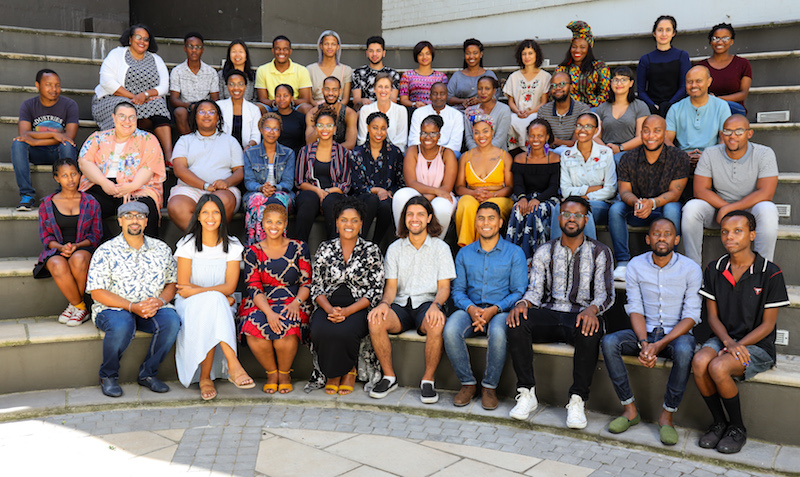 The conference began with the Benjamin E Mays Address, which is an opportunity for one of our more veteran fellows with a PhD to talk about their career, research, and Mellon experience. Dr. Nkosiyasi Dube, who entered MMUF in 2008 and is currently a lecturer in the Department of Social Work at the University of Witwatersrand, delivered an address that was deeply engaging to the fellows attending. He encouraged fellows to be confident in their work and in themselves as academics, remarking, “If you don’t say it, then no one will know it … whatever you do, don’t be comfortable in your corner—be confident and share [your work] …” He concluded his speech by commenting on the crucial role that Mellon’s support played in his current success. Quoting an African proverb, he said, “The axe that cuts a tree forgets, but the cut tree never [does].”

The vice chancellors from Wits and UCT, as well as other professors and administrators from our South African institutions, joined the fellows at dinner for lively conversation and the building of new networks.

While the South African Summer Conference followed the model of the US Summer Conference in that fellows were able to present their work on paper panels and get feedback, enjoy workshops on a variety of skills ranging from studying overseas to how to write abstracts and CVs, every participant was South African and affiliated with the Mellon program. This was a powerful example not only of the growth of MMUF in South Africa, but also of the growing production of knowledge from the global South.

The keynote panel, “On Being a Black Scholar in South Africa,” included Dr. Abongwe Bangeni, co-ordinator of the Language Development Group at UCT’s Centre for Higher Education Development; Edwina Brooks, director of student development at UCT; and Dr. Sakhumzi Mfecane, department head of anthropology and sociology at UWC. The panelists spoke about issues that fellows wanted addressed. These included the decolonization of the academy; mindfulness of the space one occupies as a black scholar; finding one’s own voice and agency in these spaces; and supporting each other on the journey toward a PhD. Each of the panelists spoke about affirming their identities as black scholars and the importance of strong support networks. Brooks offered words of encouragement to the audience: “Negative voices of our past tend to come out more in tough moments—ignore them, block them out, [and] keep going.” Most importantly, the panelists shared their experiences and allowed time for questions from the fellows.

The conference concluded with a master’s/PhD panel of fellows. It was an opportunity for peer mentoring as those on the panel relayed their experiences as honours, master’s, and PhD students. The panelists touched on themes surrounding representation in the academy; mental health and self-care; standing up for one’s beliefs; and remembering one’s origins and what that represents. As Dr. Marlon Swai, a lecturer at UCT, put it, “The grass always seems greener on the other side, but when you understand where your resources are properly spent, you will realize that [South Africa] is the place to be.”