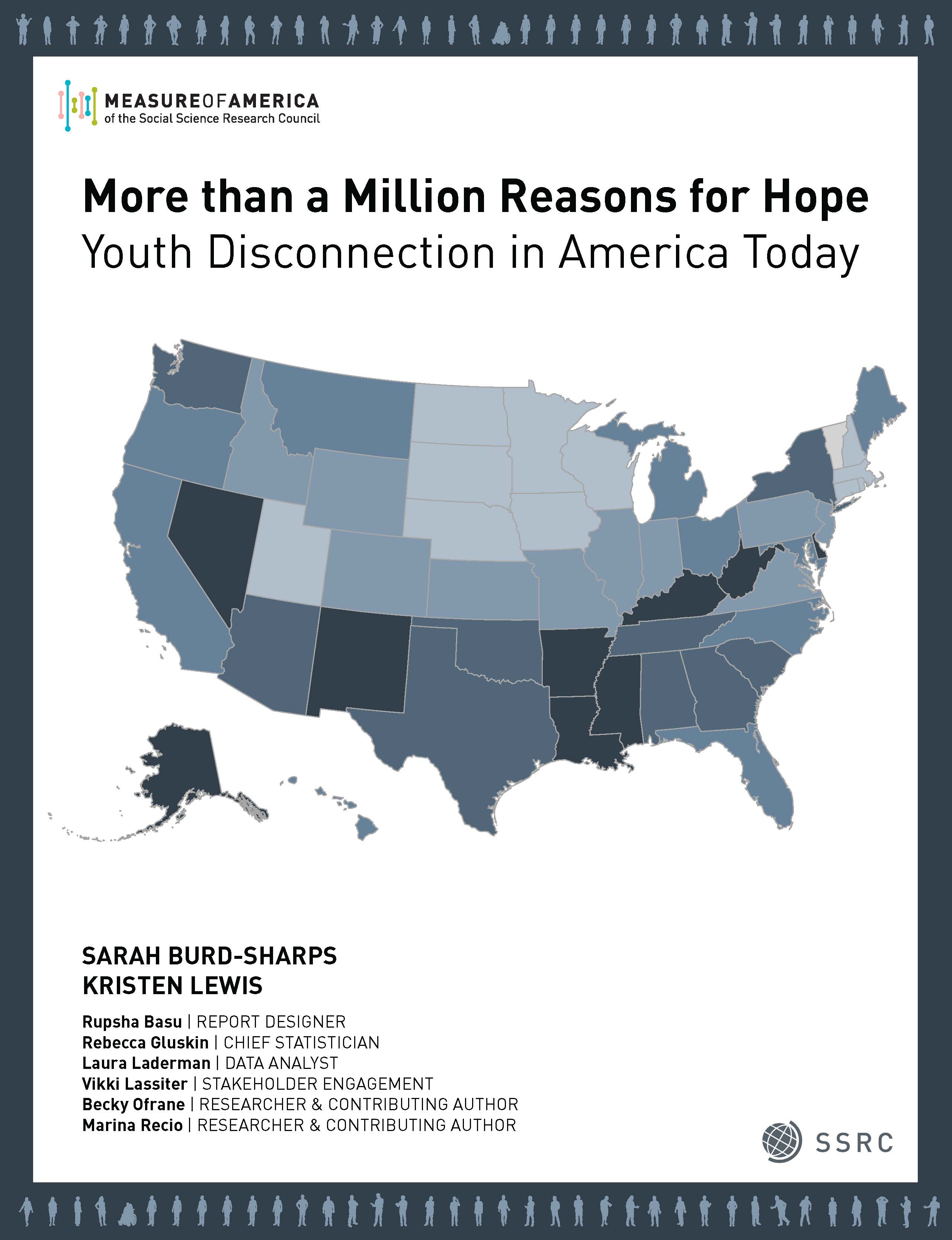 More Than a Million Reasons for Hope: Youth Disconnection in America Today is the fifth in the Measure of America Disconnected Youth series, which began in 2012.

In 2016, the number of young people disconnected from both work and school declined for the sixth year in a row.The 2016 disconnected youth rate of 11.7 percent represents a 20 percent decrease since 2010, when disconnection peaked in the aftermath of the Great Recession—about 1.2 million fewer young people. A large group of young people saw their opportunities expand alongside the expanding economy; the youth unemployment rate was roughly half in 2016 what it was in 2010. But not all young people saw growth: 4.6 million young women and men remain disconnected from both school and the labor market, unmoored from routines of work and school that give shape, purpose, and direction to one’s days, and deprived of experiences that build knowledge, networks, skills, and confidence.

More than a Million Reasons for Hope: Youth Disconnection in America Today analyzes youth disconnection in the United States by state, metro area, county, and community type, and by gender, race, and ethnicity. Disconnected youth, also known as opportunity youth, are teenagers and young adults between the ages of 16 and 24 who are neither in school nor working. This report is the first in Measure of America’s disconnected youth series to compare American and European metro areas or to examine disconnection by group characteristics such as poverty status, motherhood, marriage status, disability, English proficiency, citizenship, educational attainment, institutionalization, and household composition for different racial and ethnic groups.

• URBAN-RURAL DIVIDE. Young people living in rural areas have the highest rate of youth disconnection, 19.3 percent, followed by those living in towns (14.9 percent) and urban centers (12.9 percent). Suburban youth are the least likely to be disconnected, with a rate of 11.3 percent. Disconnection rates in rural counties vary immensely, from essentially 0 percent to 76.6 percent.

• SUBGROUPS. Racial and ethnic categories can mask diversity within groups. Among Asians, Vietnamese youth have the lowest rate of disconnection, 4.5 percent, and Hmong youth have the highest, 15.1 percent. Among Latinos, rates range from 8.9 percent for South Americans to 14.9 percent for young people who trace their roots to the Spanish-speaking Caribbean.

• INSTITUTIONALIZATION. An alarmingly high proportion of disconnected black boys and young men—nearly a fifth—is institutionalized, compared to just 0.3 percent of the overall population ages 16 to 24.

Interact with the data.