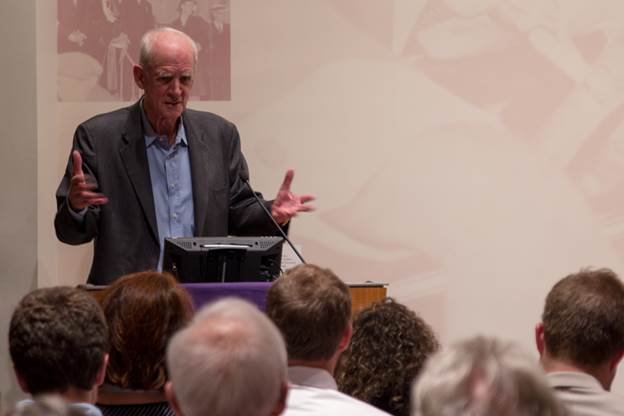 As part of his residency with us in 2016, Professor Charles Taylor, the Anxieties of Democracy program’s second Democracy Fellow, led a two-part Seminar on current 'anxieties of democracy’. Twelve doctoral students, from diverse disciplines and universities, competed for a spot at the table. This year, The New Yorker’s Joshua Rothman was also in attendance, and featured Taylor’s Democracy Seminar and its participants in his widely-circulated piece, ‘How to Restore Your Faith in Democracy.’

Charles Taylor is Emeritus Professor at McGill University and the recipient of the prestigious Berggruen, John W. Kluge, Templeton, and Kyoto prizes, among other honors. Regarded as one of the world’s most prominent political philosophers, Taylor has also played an important role in bridging theory and practice throughout his career. His philosophical approaches to the issues of modernity and democracy—in key texts including Sources of the Self (1989) and Multiculturalism: Examining The Politics of Recognition (1994)—have transformed conceptual categories in the humanities and social sciences. Taylor’s longstanding political participation has been equally illustrious.

Jean-Jacques Rousseau, The Social Contract, All (in a pinch, Book I).