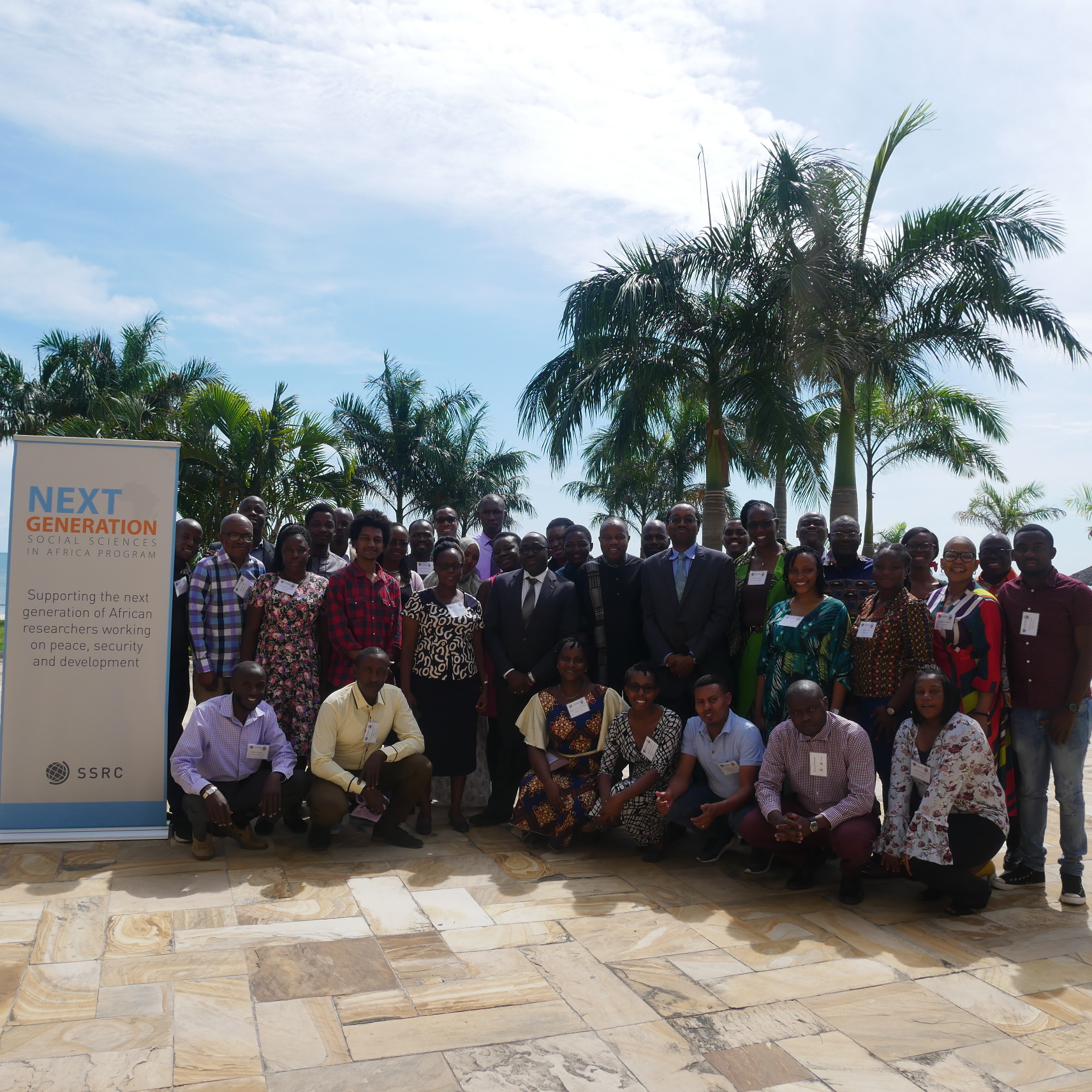 The Next Generation Social Sciences in Africa (Next Gen) and African Peacebuilding Network (APN) program of the Social Science Research Council (SSRC) held a week-long joint workshop in Dar es Salaam, Tanzania for the 2019 cohort of APN Individual Research Grant (IRG) recipients and the 2019 cohort of Next Gen fellows. The workshop was organized in collaboration with the University Dar es Salaam from December 9th to 14th, 2019.

24 Next Gen Proposal Development and Dissertation Research fellows were joined by six experienced and scholars and Next Gen board members in Dar es Salaam, Tanzania for a four-day workshop event including two full days devoted to holding a series of joint activities with APN grantees. Next Gen fellows met from December 9th – 12th, 2019. The workshop was designed to help early-career faculty (progressing through various stages of their doctoral dissertation) from African universities learn more about each other’s work, engage in scholarly reflections, research, writing and networking. Other activities included a series of lectures, working group sessions and one-on-one feedback sessions with facilitators on individual projects and interdisciplinary perspectives to research.

The first day of the Next Gen workshop began with opening remarks given by Professor Razack Lokina, the principal of the College of Social Sciences at the University of Dar es Salaam. Professor Lokina welcomed the fellows to Tanzania and acknowledged the SSRC’s efforts to advance knowledge sharing of important issues pertinent to the African continent. Dr. Cyril Obi, Program Director of the APN and Next Gen programs also gave opening remarks.

The keynote lecture, titled “Green Violence, Environmental Governance and the Challenge of Development in Africa,” was delivered by Professor Maano Ramutsindela of the University of Cape Town, South Africa. In his lecture, Professor Ramutsindela spoke about conceptualizing violence in the context of “nature,” environmental governance, and the challenge of African development. He noted that this was important for several reasons: the place of Africa in the world, the history of conservation on the continent and contemporary practices and experiences. In this regard, Prof. Ramutsindela called for greater reflection on the brutalities against non-human nature with the visible suffering of certain animals. He interrogated the assumption that local African communities do not appreciate nature, and such appreciation had to imposed or received from outside. He went further to show how and why global and local forces interprete nature, and raises the important question about “How do Africans own and govern their own natural resources?” In concluding he called for a critical reading of tactics of conservation movements, and learn to confront these by pooling Africa’s intellectual resources to tackle the logic underpinning such tactics.

The second day of the workshop consisted of plenary sessions, cohort breakout sessions, and one-on-one sessions. The first plenary lecture of the day was given by Professor Thomas Kwasi Tieku (Western University) and was titled, “Why Writing Matters: Overcoming Common Problems in Doctoral Dissertation Writing.” The lecturer talked about the value of good writing and how readers don’t care about “linguistic gymnastics” and that using complicated jargon will isolate the common reader. He also emphasized the need to diversify resources and the importance of paying attention to the content of dissertations.

The second plenary lecture was titled “The Lived Experiences of Women Scholars in Peacebuilding Research: Some Reflections” and was given by Dr. Yolande Bouka (Queen’s University). Professor Bouka spoke about the patterns of discrimination that come with being a woman in academia and opened it up to the women fellows in the room to talk about their experiences.

The third day of the workshop turned into a joint meeting with APN grantees. The day began with opening remarks from Professor William A. L. Anangisye, Vice Chancellor of the University of Dar es Salaam. This was then followed by a keynote lecture titled “Law Making, Peacemaking, and National Development: Reflections on Research and Policy Linkages” given by Dr. Tulia Ackson, the Deputy Speaker of the National Assembly of the Republic of Tanzania. Dr. Tulia Ackson spoke about the correlation between research and policymaking and how these two are very important when talking about peacebuilding in Tanzania and in other African countries. The day’s activities were concluded with an emotional and reflective off-site visit to Bagamoyo, a cultural heritage site which in the first half of the 19th century became a trading port for ivory and the slave trade. Following the visit, APN and Next Gen fellows and grantees attended a dinner at the Vice Chancellor’s Residence at the University of Dar es Salaam.

The second joint workshop day consisted of two joint thematic sessions and two roundtables. The first roundtable featured Professor Yolande Bouka (Queen’s University), Dr. Siphokazi Magadla (Rhodes University), and Professor Sarah Ssali (Makerere University). The roundtable was titled “Mainstreaming Gender in Academic Writing.” During the roundtable, the speakers talked about how taking gender seriously when researching can allow scholars and researchers to take fundamental parts of and facts about our history into consideration. They also urged the fellows and grantees to question how having a gender focus can bring about new insights to their analyses/research.

The second and last roundtable of the joint workshop featured a panel of APN and Next Gen fellows and grantees who spoke on the “Challenges of Dissertation Writing – Candidate and Supervisor Perspectives.” The featured grantees were Njoki Wamai, Fikile Masikane, Wesley Mwatwara. It was moderated by Nixo Wamamela. The fellows and grantees on the panel talked about how important it is to make sure candidates do their research before getting into a PhD program. Some spoke about the complicated power dynamic embedded within the student-supervisor relationship while others talked about the pressure of having to publish while being a PhD student.