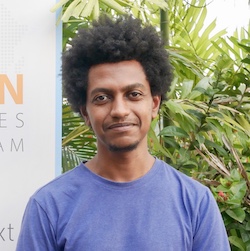 Yosef S. Jemberie was born and raised in Addis Ababa, Ethiopia. He received his BEd in history from Haramaya University, Ethiopia in 2008. He did his MA in philosophy at Addis Ababa University in 2013. The title of his MA thesis was “On the (Non-)Question of ‘What is Knowledge?” in which he attempted to do a deconstructive reading of Plato’s Theaetetus. Yosef taught history and philosophy at Samara University, Ethiopia, where he also served as the head of the Department of Civics and Ethics under the College of Social Sciences and Humanities. He is currently a third-year student of the interdisciplinary PhD program at the Makerere Institute of Social Research (MISR), Makerere University, Uganda. His areas of specialization are literary, cultural, and political studies. His research focuses on the themes of power, “state of exception,” comedy, and famine. Jemberie’s proposed PhD project is a genealogical study of the nature of modern political power during cases of state of emergency in Ethiopian history since the nineteenth-century.