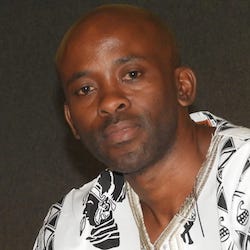 For about 25 years he has lived, studied, worked and conducted research in several post-conflict zones on the African continent. He has intervened in several academic and nonacademic events on a global level including the International Culture Summit held at the Scottish Parliament in 2018 in Edinburgh (as speaker, facilitator and performer), the 2nd Conference on Memory Studies in 2018 in Copenhagen (as special performance-presenter), the International Leadership Summit at the University of the Free State in Bloemfontein in 2018 (as keynote speaker and cohort mentor), Conflict Resolution, Arts and Health Research seminars in 2016 and 2017 in Dublin (as keynote speaker, performer and facilitator), the Youth Voices Conference at the Constitutional Court of South Africa in Johannesburg in 2017 (as keynote speaker and facilitator). Théogѐne NIWENSHUTI was among artists selected for a funded creative residence at the William Kentridge’s Center for the Less Good Idea in 2018. He has received several other awards, prestige scholarships, medals and honors from a number of African and international institutions for his community, artistic and academic contributions.

Some of his publications: