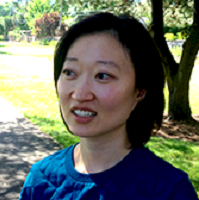 Mi-Ryong Shim is Assistant Professor of Korean Literature and Culture at the Department of Asian Languages and Cultures. A specialist in modern Korean literature and intellectual history, she received her PhD from the Department of East Asian Languages and Cultures at Columbia University and held the Korea Foundation postdoctoral fellowship at Harvard University. Mi-Ryong’s research interests include the aesthetics of nativism, comparative colonialism, and globalization in twentieth century Korea. She is currently working on a manuscript that examines discourses of conversion, imperialization, and Pan-Asian regionalism during the Asia-Pacific War as continuations of earlier discussions regarding the problematic nature of modernity in colonial Korea. Her translations of modern Korean literature have been published as part of the Literature Translation Institute of Korea’s 20th Century Korean Literature series, and she is currently completing a translation of Yi Hyo-sŏk’s seminal novel Pollen (Hwabun). Mi-Ryong’s teaching interests include modern and contemporary Korean literature, cultural history, film, and popular culture.