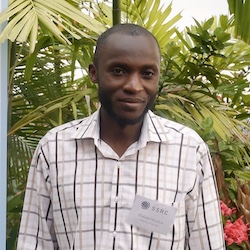 Abdulhakim Abdalla Nsobya is a PhD Candidate in the Department of Religious Studies at University of Cape Town (UCT) in South Africa, where he has been serving as researcher and teaching assistant since 2016. He received his BA and MA in mass communication from Islamic University in Uganda (IUIU) in 2011 and University of Dar es Salaam (Tanzania) in 2015 respectively. In 2016, he joined University of Cape Town for an MA in religious studies which he completed in 2017, before enrolling in the PhD program in the same department in 2018.

His research interests span in both media and religious studies. He is currently researching on Muslim electronic media (particularly radio and television) and how they shape the identity of Ugandan Muslims in relation to national unity. He has previously explored the interplay of religion and politics in the rise and development of the least known but oldest Islamist Militant group in Sub-Sahara Africa known as Allied Democratic Forces (ADF). His journal articles and research projects are readily available on Academia.edu and ResearchGate pages. Besides academics, he enjoys soccer/football and hiking.