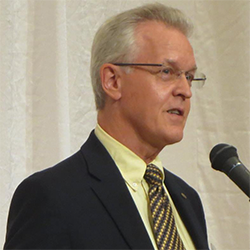 Brian Woodall is a professor in Georgia Tech’s Sam Nunn School of International Affairs.  He received his PhD in Political Science from the University of California at Berkeley, and has held faculty positions at the University of California at Irvine and at Harvard University as well as visiting appointments at the University of Tokyo, Tokyo Institute of Technology, and Tohoku University.  In addition to numerous articles and book chapters, Dr. Woodall is the author of Growing Democracy in Japan, Japan Under Construction, and Japan's Changing World Role, and co-editor of Elections in Japan, Korea, and Taiwan Under the Single Non-Transferable Vote.  He has received funding support from the U.S. Japan Educational Commission (Fulbright), Coca-Cola Foundation, U.S.-Japan Friendship Commission, the Abe Fellowship Program of the Social Science Research Council, the University of California Pacific Rim Research Program, and the Japan Foundation.  He has been interviewed on CNN, Bloomberg BusinessWeek, the Asahi Shimbun, and other media outlets.  His current research focuses on issues of sustainable development, including: energy and environmental policies and the role of institutions in shaping transportation investment, equity, and regional prosperity.  He teaches graduate- and undergraduate-level courses in Japanese politics, comparative politics, and sustainable development.
In spite of Japan's obvious importance in international economic affairs and the expectations of a vastly enhanced Japanese politico-strategic role on the world stage, to date no major study has been undertaken that focuses squarely on the longitudinal changes in the social origins, career patterns, and perceptions of the government administrators and elected politicians who form the central core of the country's foreign policy elite. The proposed study will examine the nature and direction of change in the composition and world view of Japan's foreign policy elite.