Skip to content
Book
Between Two Motherlands: Nationality and Emigration among the Greeks of Bulgaria, 1900–1949
Dragostinova, Theodora

In 1900, some 100,000 people living in Bulgaria―2 percent of the country’s population―could be described as Greek, whether by nationality, language, or religion. The complex identities of the population―proud heirs of ancient Hellenic colonists, loyal citizens of their Bulgarian homeland, members of a wider Greek diasporic community, devout followers of the Orthodox Patriarchate in Istanbul, and reluctant supporters of the Greek government in Athens―became entangled in the growing national tensions between Bulgaria and Greece during the first half of the twentieth century.

In Between Two Motherlands, 2001 IDRF Fellow Theodora Dragostinova explores the shifting allegiances of this Greek minority in Bulgaria. Diverse social groups contested the meaning of the nation, shaping and reshaping what it meant to be Greek and Bulgarian during the slow and painful transition from empire to nation-states in the Balkans. In these decades, the region was racked by a series of upheavals (the Balkan Wars, World War I, interwar population exchanges, World War II, and Communist revolutions). The Bulgarian Greeks were caught between the competing agendas of two states increasingly bent on establishing national homogeneity.

Based on extensive research in the archives of Bulgaria and Greece, as well as fieldwork in the two countries, Dragostinova shows that the Greek population did not blindly follow Greek nationalist leaders but was torn between identification with the land of their birth and loyalty to the Greek cause. Many emigrated to Greece in response to nationalist pressures; others sought to maintain their Greek identity and traditions within Bulgaria; some even switched sides when it suited their personal interests. National loyalties remained fluid despite state efforts to fix ethnic and political borders by such means as population movements, minority treaties, and stringent citizenship rules. The lessons of a case such as this continue to reverberate wherever and whenever states try to adjust national borders in regions long inhabited by mixed populations. Buy it on Amazon. 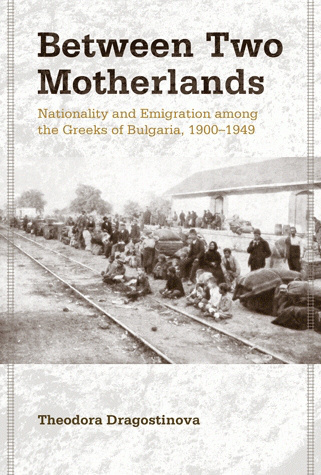