The idea of perang sabil, a hybrid Malay/Arabic term roughly translated as war in the way of Allah, persists as an enduring staple of the popular and academic literature on resistance to colonial rule in Aceh and Mindanao. However, even in the midst of a genuine conflict zone, holy war signified neither a fixed term with any preordained meaning nor a straightforward reflection of violence between implacably opposed antagonists. Drawing from the records of colonial scholars, soldiers, and officials, as well as a variety of local Southeast Asian newspapers, I argue that perang sabil emerged as a multivalent discursive weapon. The idea of perang sabil served as a contingent and contested signifier that non-Muslim colonizer and Muslim colonized alike could deploy in ongoing dialogical engagements over the proper definition of progress and reform, of “good” versus “bad” Muslims, and of the very nature of what might be called a “modern Mohammedan.” Indeed, while colonial invaders frequently portrayed perang sabil as the antithesis of modernity, logically embedded in that very rhetorical move was the necessity of acknowledging some “good” Islamic alternative, of promoting forms of piety that could eschew rebellion and serve the aspirations of the colonial state. This article will demonstrate that many Acehnese and Mindanaons seized this opening, promoting theological reform, forging new mutual aid societies, and in the process, paradoxically, leveraging the epistemic violence of colonialism to reconfigure their Muslim identity. However, such categories of progress and reform, “good Muslim” and “bad” Muslim, would not prove stable. This article will further demonstrate that the constant valuation and revaluation of holy war that arose from debates across the colonial divide often spun well beyond the control of the authorities. Indeed, even as colonial regimes sought to produce “good Muslims” in opposition to violent resistance, by the late 1930s and 40s, a fledgling cohort of nationalists moved to commemorate martyrdom and perang sabil not as the antithesis of modernity, but as its very apotheosis. 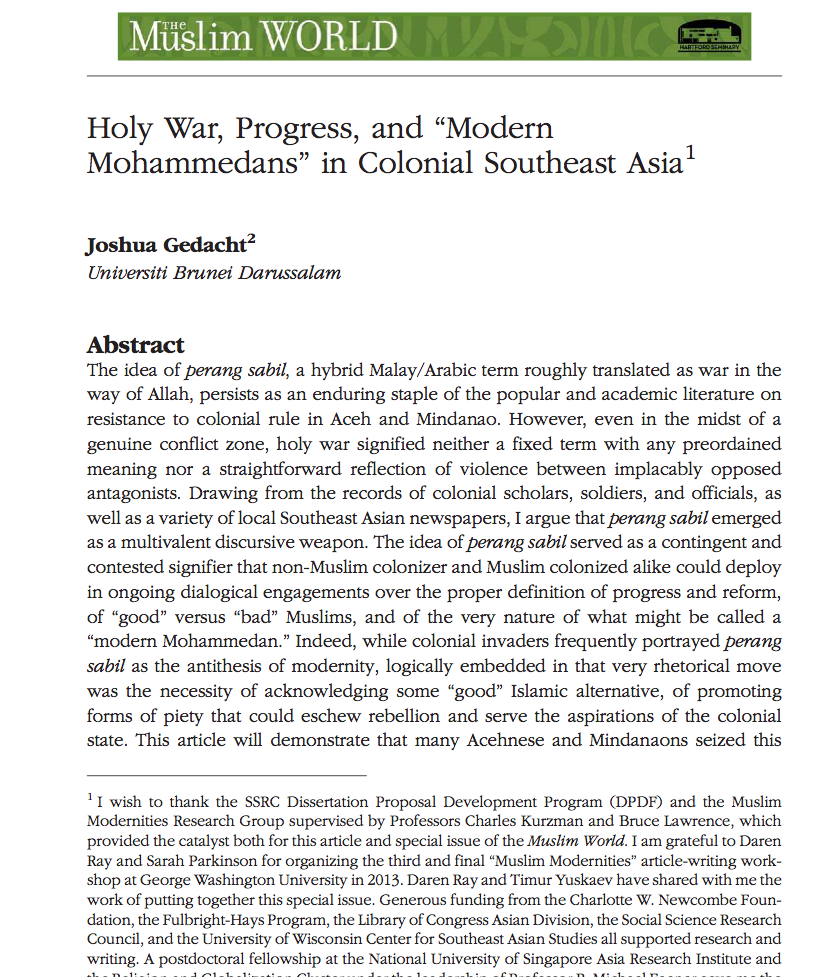