Book chapter contributed by 2001 Abe Fellow Amy Borovoy in Carol Greenhouse’s edited volume, Ethnographies of Neoliberalism. This chapter is based on Borovoy’s project, “Shifting Youth Culture and the Management of Juvenile Behavioral Problems in Japan and the U.S.”

Since 2008, the global economic crisis has exposed and deepened the tensions between austerity and social security—not just as competing paradigms of recovery but also as fundamentally different visions of governmental and personal responsibility. In this sense, the core premise of neoliberalism—the dominant approach to government around the world since the 1980s—may by now have reached a certain political limit. Based on the premise that markets are more efficient than government, neoliberal reforms were pushed by powerful national and transnational organizations as conditions of investment, lending, and trade, often in the name of freedom. In the same spirit, governments increasingly turned to the private sector for what were formerly state functions. While it has become a commonplace to observe that neoliberalism refashioned citizenship around consumption, the essays in this volume demonstrate the incompleteness of that image—as the social limits of neoliberalism are inherent in its very practice.

Ethnographies of Neoliberalism collects original ethnographic case studies of the effects of neoliberal reform on the conditions of social participation, such as new understandings of community, family, and gender roles, the commodification of learning, new forms of protest against corporate power, and the restructuring of local political institutions. Carol J. Greenhouse has brought together scholars in anthropology, communications, education, English, music, political science, religion, and sociology to focus on the emergent conditions of political agency under neoliberal regimes. This is the first volume to address the effects of neoliberal reform on people’s self-understandings as social and political actors. The essayists consider both the positive and negative unintended results of neoliberal reform, and the theoretical contradictions within neoliberalism, as illuminated by circumstances on the ground in Africa, Europe, South America, Japan, Russia, and the United States. With an emphasis on the value of ethnographic methods for understanding neoliberalism’s effects around the world in our own times, Ethnographies of Neoliberalism uncovers how people realize for themselves the limits of the market and act accordingly from their own understandings of partnership and solidarity. 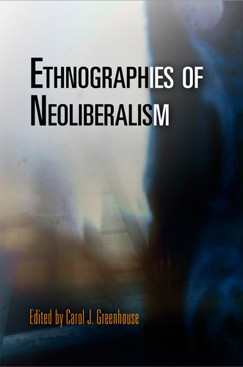