As a soldier in the French army, Pierre Bourdieu took thousands of photographs documenting the abject conditions and suffering (as well as the resourcefulness, determination, grace, and dignity) of the Algerian people as they fought in the Algerian War (1954–1962). Sympathizing with those he was told to regard as “enemies,” Bourdieu became deeply and permanently invested in their struggle to overthrow French rule and the debilitations of poverty.

Upon realizing the inability of his education to make sense of this wartime reality, Bourdieu immediately undertook the creation of a new ethnographic-sociological science based on his experiences—one that became synonymous with his work over the next few decades and was capable of explaining the mechanics of French colonial aggression and the impressive, if curious, ability of the Algerians to resist it.

This volume pairs 130 of Bourdieu’s photographs with key excerpts from his related writings, very few of which have been translated into English. Many of these images, luminous aesthetic objects in their own right, comment eloquently on the accompanying words even as they are commented upon by them. Bourdieu’s work set the standard for all subsequent ethnographic photography and critique. This volume also features a 2001 interview with Bourdieu, in which he speaks to his experiences in Algeria, its significance on his intellectual evolution, his role in transforming photography into a means for social inquiry, and the duty of the committed intellectual to participate in an increasingly troubled world. 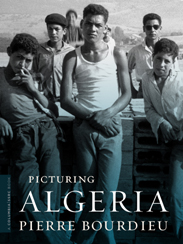