In a manufacturing metropolis in south China lies Dafen, an urban village that famously houses thousands of workers who paint van Goghs, Da Vincis, Warhols, and other Western masterpieces for the world market, producing an astonishing five million paintings a year. To write about work and life in Dafen, 2008 IDRF Fellow Winnie Wong infiltrated this world, first investigating the work of conceptual artists who made projects there; then working as a dealer; apprenticing as a painter; surveying wholesalers and retailers in Europe, East Asia and North America; establishing relationships with local leaders; and organizing a conceptual art exhibition for the Shanghai World Expo. The result is Van Gogh on Demand, a fascinating book about a little-known aspect of the global art world—one that sheds surprising light on the workings of art, artists, and individual genius.

Confronting big questions about the definition of art, the ownership of an image, and the meaning of originality and imitation, Wong describes an art world in which idealistic migrant workers, lofty propaganda makers, savvy dealers, and international artists make up a global supply chain of art and creativity. She examines how Berlin-based conceptual artist Christian Jankowski, who collaborated with Dafen’s painters to reimagine the Dafen Art Museum, unwittingly appropriated the work of a Hong Kong-based photographer Michael Wolf. She recounts how Liu Ding, a Beijing-based conceptual artist, asked Dafen “assembly-line” painters to perform at the Guangzhou Triennial, neatly styling himself into a Dafen boss. Taking the Shenzhen-based photojournalist Yu Haibo’s award-winning photograph from the Amsterdam’s World Press Photo organization, she finds and meets the Dafen painter pictured in it and traces his paintings back to an unlikely place in Amsterdam. Through such cases, Wong shows how Dafen’s painters force us to reexamine our preconceptions about creativity, and the role of Chinese workers in redefining global art.

Providing a valuable account of art practices in an ascendant China, Van Gogh on Demand

is a rich and detailed look at the implications of a world that can offer countless copies of everything that has ever been called “art.” Buy from Amazon. 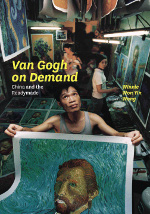