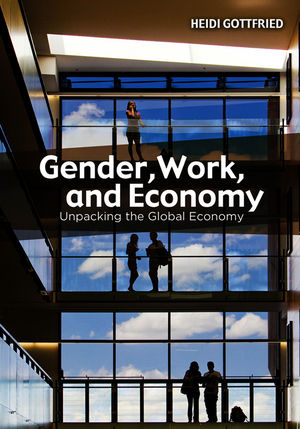 Book written by 1996 Abe Fellow Heidi Gottfried based on her project "Gendering Work: Neo-Fordism in Japan, the US, Sweden, Germany and Great Britain."

This engaging new text uses a feminist lens to crack open the often hidden worlds of gender and work, addressing enduring questions about how structural inequalities are produced and why they persist. Making visible the social relationships that drive the global economy, the book explores how economic transformations not only change the way we work, but how we live our lives.

The full extent of changing patterns of employment and the current financial crisis cannot be fully understood in the confines of narrow conceptions of work and economy. Feminists address this shortcoming by developing both a theory and a political movement aimed at unveiling the power relations inherent in old and new forms of work. By providing an analysis of gender, work, and the economy, Heidi Gottfried brings to light the many faces of power from the bedroom to the boardroom. A discussion of globalization is threaded throughout the book to uncover the impact of increasing global interconnections, and vivid case studies are included, from industrialized countries such as the US and the global cities of New York, London, and Tokyo, as well as from developing countries and the emerging global cities of Beijing, Shanghai, and Dubai.

This comprehensive analysis of gender and work in a global economy, incorporating sociology, geography, and political economy perspectives, will be a valued companion to students in gender studies and across the social sciences more generally.