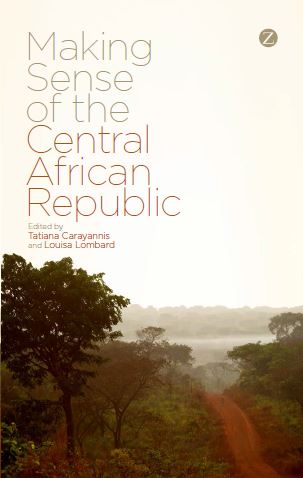 Lying at the center of a tumultuous region, the Central African Republic and its turbulent history have often been overlooked. Democracy, in any kind of a meaningful sense, has eluded the country. Since the mid-1990s, army mutinies and serial rebellion in CAR have resulted in two major successful coups. Over the course of these upheavals, the country has become a laboratory for peacebuilding initiatives, hosting a two-decade-long succession of UN and regional peacekeeping, peacebuilding and special political missions.

Tatiana Carayannis, the Social Science Research Council’s Director of the Understanding Violent Conflict Initiative (UVC) and Deputy Director of the Conflict Prevention and Peace Forum, and Yale University’s Associate Professor Louisa Lombard (as co-editors and chapter contributors) have brought together the foremost experts on the Central African Republic in Making Sense of the Central African Republic. This much-needed volume, published by Zed Books (US Distributor - University of Chicago Press), provides the first in-depth analysis of the country’s recent history of rebellion, instability, and international and regional intervention.

Making Sense of the Central African Republic was undertaken under the auspices of the SSRC’s Conflict Prevention and Peace Forum, founded in 2000 in response to the Brahimi Report, to connect UN decision-makers with scholars on and from conflict areas in which the UN is engaged and thus provide the UN with a deeper understanding of these places and their people; and the Justice and Security Research Programme (JSRP), a global research consortium based at the London School of Economics and Political Science. SSRC also hosted a two-day book contributors’ meeting in June 2014 to give the authors a chance to offer ideas, reactions, and comments on the various chapters.