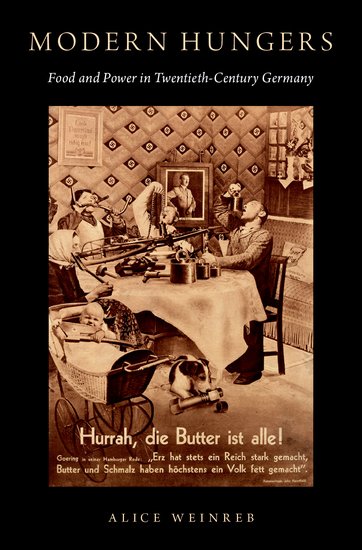 During World War I and II, modern states for the first time experimented with feeding--and starving--entire populations. Within the new globalizing economy, food became intimately intertwined with waging war, and starvation claimed more lives than any other weapon. As 2006 Fellow Alice Weinreb shows in Modern Hungers, nowhere was this new reality more significant than in Germany, which struggled through food blockades, agricultural crises, economic depressions, and wartime destruction and occupation at the same time that it asserted itself as a military, cultural, and economic powerhouse of Europe.

The end of armed conflict in 1945 did not mean the end of these military strategies involving food. Fears of hunger and fantasies of abundance were instead reframed within a new Cold War world. During the postwar decades, Europeans lived longer, possessed more goods, and were healthier than ever before. This shift was signaled most clearly by the disappearance of famine from the continent. So powerful was the experience of post-1945 abundance that it is hard today to imagine a time when the specter of hunger haunted Europe, demographers feared that malnutrition would mean the end of whole nations, and the primary targets for American food aid were Belgium and Germany rather than Africa. Yet under both capitalism and communism, economic growth as well as social and political priorities proved inseparable from the modern food system.

Drawing on sources ranging from military records to cookbooks to economic and nutritional studies from a multitude of archives, Modern Hungers reveals similarities and striking ruptures in popular experience and state policy relating to the industrial food economy. In so doing, it offers historical perspective on contemporary concerns ranging from humanitarian food aid to the gender-wage gap to the obesity epidemic. Buy it here.