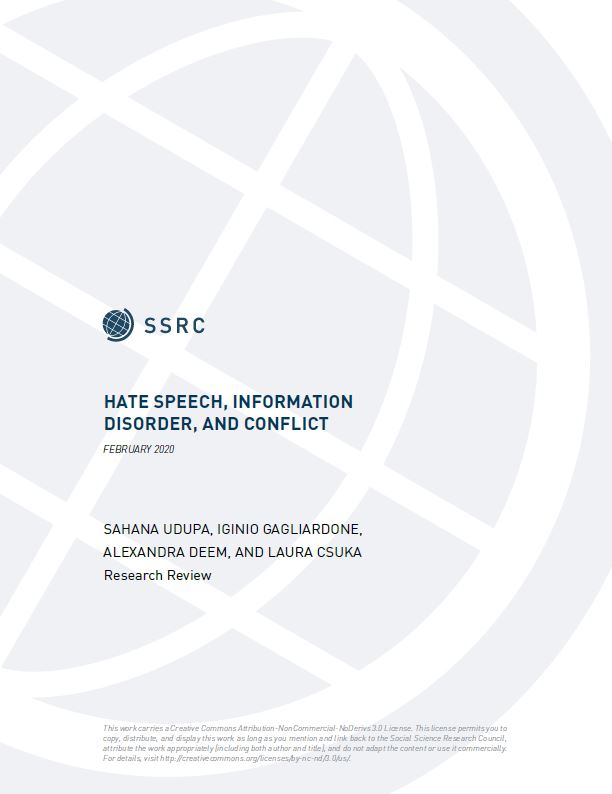 Download Field of Disinformation, Democratic Processes, and Conflict Prevention: A Scan of the Literature

The SSRC Academic Network on Peace, Security, and the United Nations, an initiative of the Council's Conflict Prevention and Peace Forum (CPPF) and its Understanding Violent Conflict (UVC) Program, was established in 2019 out of a request from the United Nations Secretariat to provide UN entities and departments charged with responsibility for peace and security with better, more systematic access to new and emerging research in the academy. The Academic Network also aims to facilitate collaborative engagements between the UN and various academic institutions, research networks, and professional associations working on conflict-management relevant research.

On 30 January 2020, the SSRC convened the second research workshop of its Academic Network on Peace, Security, and the United Nations in New York. This workshop, on Disinformation, Democratic Processes, and Conflict Prevention, examined the frameworks, findings, and debates in emerging scholarship on information disorder and the linkages between disinformation, elections, hate speech, and identity-based violence. Participants drew on cases in Sub-Saharan Africa and Southeast Asia. The workshop also explored the ways in which disinformation affects the UN conflict prevention agenda, and how the UN system can better identify, track, and respond to the negative impacts of disinformation in countries and regions where the UN is engaged.

This workshop was a multi-program collaboration led by the SSRC’s Conflict Prevention and Peace Forum. It drew on the Council’s new MediaWell program, a new disinformation research mapping web platform, and the Next Generation Social Sciences in Africa program.

CPPF commissioned Professor Sahana Udupa of Ludwig Maximilians-Universitat (LMU) Munich to draft a literature review on the intersection of hateful speech, information disorder, and conflict. The review was distributed to workshop participants, together with several MediaWell research reviews. A summary version of this review is being prepared and will be published separately by MediaWell.